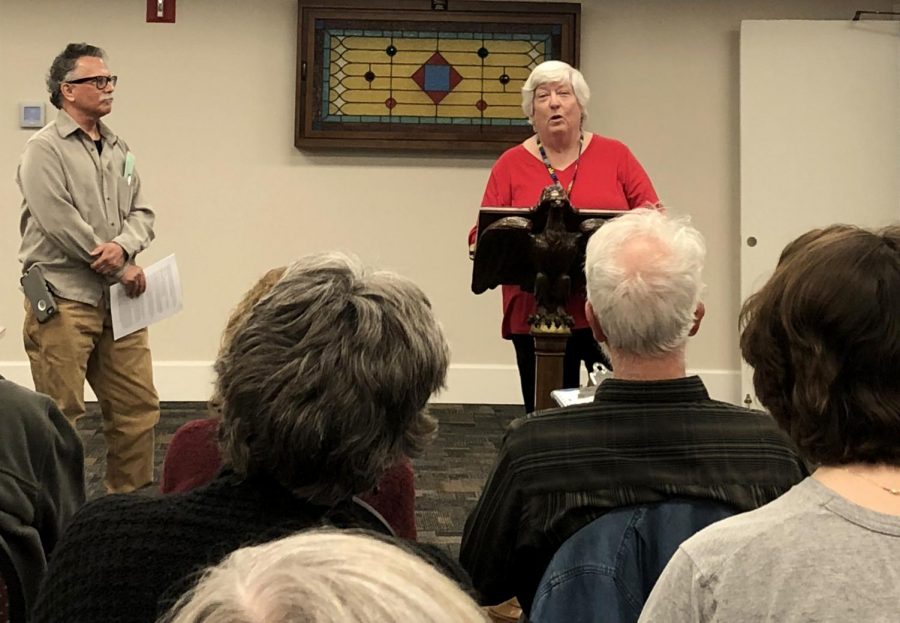 Liz Woedl from Audubon Miami Valley was one of many speakers at the Oxford Climate Summit on April 10. Photo by Patrick Donovan.

That was the theme on Wednesday of “Oxford Takes Action: Climate Summit,” a public meeting hosted by the League of Women Voters of Oxford.

Citizens packed into Oxford Presbyterian Church to talk about environmental projects and activism.

Representatives from diverse group of organizations took to the podium. One by one, they shared their work, raised awareness of key issues and encouraged residents to take action. Topics ranged from land conservation to bird preservation to the city’s new composting program.

“When I look around, I see how much power is in this room,” Oxford City Councilor Chantel Raghu said.

One speaker questioned the audience about why they care about climate change. Some responses included “my kids, grandkids, agriculture, global migration and keeping us alive.”

A commonly echoed topic from the summit was the state of trees in town. According to the city’s website, Oxford has been recognized as a Tree City USA by the Arbor Day Foundation since 1996. Several speakers highlighted this issue, including Steve Sullivan, director of the Hefner Museum of Natural History,who brought attention to the dire status of one of Oxford’s greatest treasures. Sullivan works with the Pollinator-Friendly City Initiative and wants Miami University to become a certified arboretum, which is a distinct level of accreditation. He said that around 34 percent of on-campus trees have been replaced.

“We plan to get didactic labels by the trees on campus and the hope is to show appreciation and awareness about the trees,” Sullivan said.

He said people need to spread the word that they care about trees and tell councilors to pass pollinator-friendly legislation. Dick Munson with Trees for Life also spoke about the deaths of trees in town and informed the crowd about the work of Oxford Presbyterian Church, which is distributing acorns across the community to help bring 400 new trees to town.

Mark Gilmore took the tree discussion a step further by proclaiming that Oxford needs a full-time city arborist, especially since the city of Hamilton hired one three years ago.

“We need to talk about this,” Gilmore said. “Trees have financial value for the service they provide.”

Carla Blackmar, a member of the city planning commission and advisor to an environmental group on campus, shared her vision for a green future. She said she subscribes to the “take three” philosophy of picking up three pieces of trash when she is in public. Blackmar hopes that everyone in Oxford will one day follow suit in an effort to keep waste from our water supply and away from wildlife.

“We are seeing a huge intergenerational shift with climate,” Blackmar said. “We owe it to our kids to try and sort this out.”

The activist assisted in lobbying support for the city council to pass a February 2019 resolution on a national carbon fee and dividend. This resolution aimed to show Congress that communities want bipartisan legislation to reduce the effects of climate change. It called for a carbon fee that would be placed on fossil fuels and a dividend paid back to taxpayers to boost local economies. Blackmar will attend the Citizen’s Climate Lobby in Washington, D.C. in June and welcomes letters from the community to support her legislative visit.

Another notable speaker was Suzanne Zazycki from Miami’s Institute for the Environment and Sustainability. She discussed how her department has been tasked with developing a new sustainability plan by Miami President Greg Crawford. The school’s leader wants the institute to explore whether the university should sign a climate commitment. Currently, Miami is following a sustainability plan to be completed by 2020, which targets carbon emissions, green-building standards and emphasis on sustainability in the curriculum.

“I hope Miami and Oxford can have a stronger collaboration from this new initiative,” Zazycki said.

The summit wrapped up with an address from Mayor Kate Rousmaniere, who spoke of the city’s environmental work with high-efficiency electrical motors in certain vehicles; new buildings and street lights with LED lights and methane being turned into heat. The mayor also talked about the complicated issue of recycling in uptown but did boast that Oxford is leading Butler County with curbside recycling.