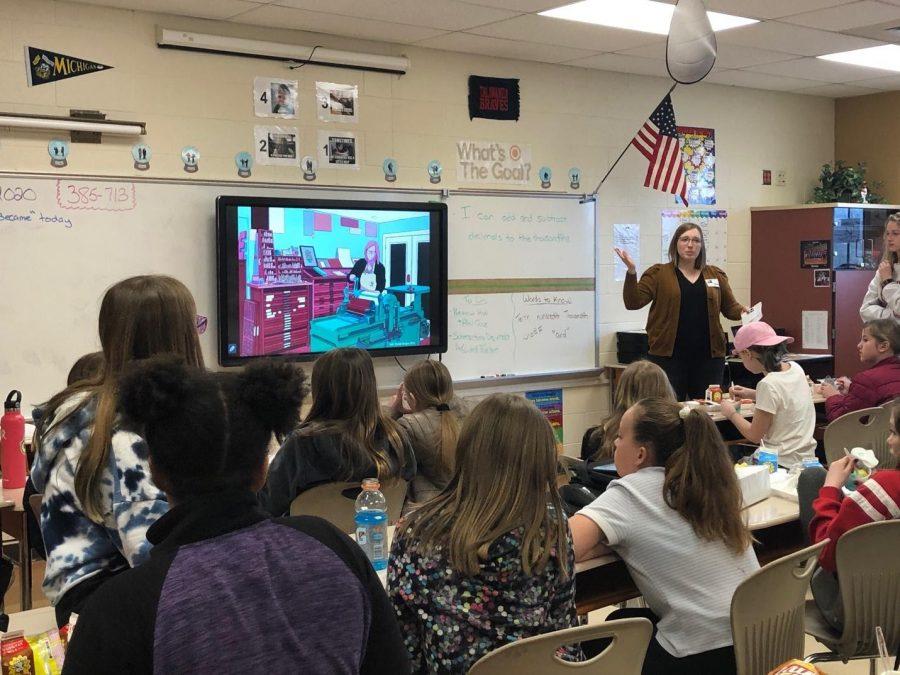 Miami professor Erin Beckloff, graphic designer and movie director, presents a piece of art about letterpress printing to the “She Became” group during a lunch program at Bogan Elementary School. Photo by Emma Kinghorn

As Erin Beckloff rolled the green ink across her iron press, 28 fifth-grade girls looked on as she forced the iron handle of her very first letterpress down, leaving an image of two women speaking and the message, “You are unstoppable.”
‍
Beckloff had just finished making a presentation to “She Became,” a new all-girls lunch program at Bogan Elementary School to expose young girls to a variety of potential careers.
‍
The program is put on by the Miami University chapter of a larger not-for-profit, co-founded by Miami sophomore Katie Buecker. Originally founded in her hometown of Ft. Thomas, Kentucky, the organization now has a presence in Indiana, Ohio and Georgia.
‍
“She Became” is a program aimed at building female confidence and providing mentorship to young girls. Every other Friday, a guest speaker is invited to share the details of their job and career path with the girls. These female role models either speak to the students in person or Facetime the girls from their places of work. Past guests have included an engineer working on wind turbines in the ocean and local WLWT news anchor Sheree Paolello.
‍
Most recently, Beckloff, assistant professor, designer, and movie director, visited the girls to discuss the letterpress community. An avid letter presser, Beckloff uses a printing press and carves designs and type into blocks to create art of ink and paper. She has created a documentary about the art form that she shared in part with the girls. After listening to Beckloff, the girls were able to test out two different types of printing and pressing.

These careers are why Buecker started “She Became” in the first place, to “show [girls] how much is out there for them,” she said.
‍
Buecker was also inspired by her own relationship with her younger sisters and wanted to introduce female mentorship to girls who may not experience it at home. After first testing the program in two Kentucky schools with small groups of girls in each, the program quickly expanded to three schools with over 30 girls.
‍
“She Became” was first offered to fourth grade girls at Bogan this past fall as an optional lunch program. This spring, it is an “opt-out” program for the fifth-grade girls. Laura Packert, guidance counselor at Bogan, wanted to expose an older grade to the program, but now hopes to do it with mostly older grades in the future.
‍
“It’s a great way to hit on college and career counseling at an elementary level,” said Packert. “I always believe that we can start that now… planting the idea of possibility in a kid’s mind.”
‍
The career guidance is especially important to Addison Murtha, a Miami sophomore who has attended almost every “She Became” session at Bogan. A political science major, she wanted to make sure that the Bogan girls know that having ambition is good. 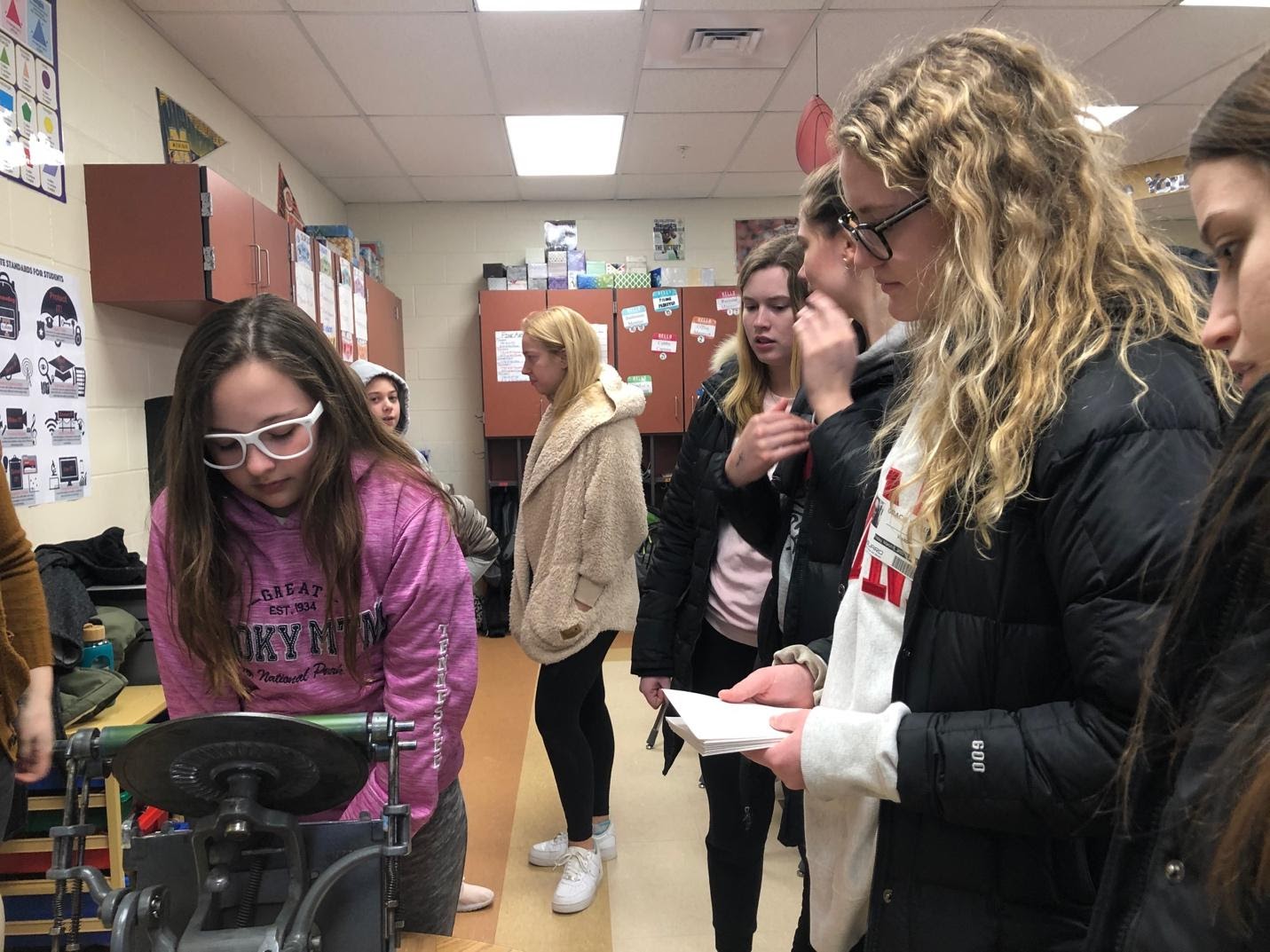 Miami Sophomore Gracie Limauro, right, with glasses, helps Bogan Elementary fifth grade girls use a hand letterpress to print postcards for themselves that read, “You are unstoppable.” Photo by Emma Kinghorn

“It is OK to work in a male-dominated world,” Murtha added. “And to make your own place in it.”
‍
This sentiment is exactly what Buecker hoped for, after growing up in a small town where “your life is planned out and people expect you to come back,” she said.
When she came to Miami without knowing anyone, she was at first intimated about starting an entirely new organization on campus. Since then, however, she has found more than 30 Miami women who have volunteered to come on a regular basis to speak with the girls about career possibilities.
‍
“The role-modeling piece gave them something to look forward to,” Packert said, referring to the Bogan students. “An extra skip in their step.”
‍
Murtha agreed, remembering several fourth graders she became close to in the fall session at Bogan. “You can tell we are really making a difference in these girls’ lives.”Buecker originally reached out to all three Talawanda elementary schools about starting “She Became” programs this year, but only heard back from Bogan. Given the organization’s success there, she plans to try expanding into the other grade schools in the future. 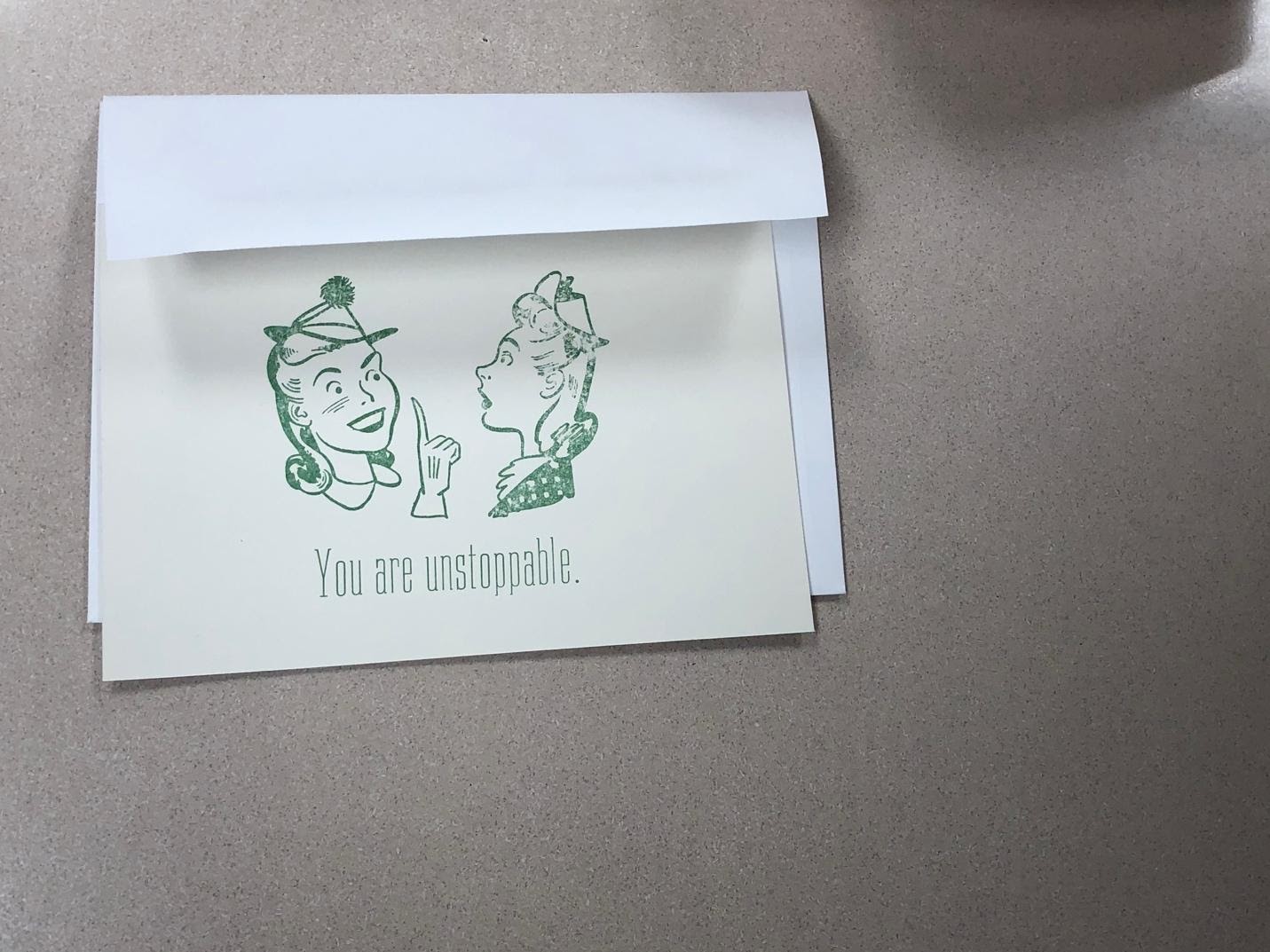 A postcard image created by each girl in the “She Became” class at Bogan Elementary, using Miami professor Erin Beckloff’s letter press. Photo by Emma Kinghorn

“I am just so overwhelmed by the immediate support that I got,” said Buecker, specifically noting Packert’s efforts to find time during the school day for this program.

After Buecker’s 2022 graduation, she expects “She Became” to continue as an independent student organization at Miami, with elected leaders as it has in other high school and college programs.
‍
“It’s making an impact on these girls,” Buecker said. “It’s not just a random thing that they signed up for.”
‍
Packert also hopes for a long-standing relationship. “It fits into everything we believe here at Bogan,” Packert said.