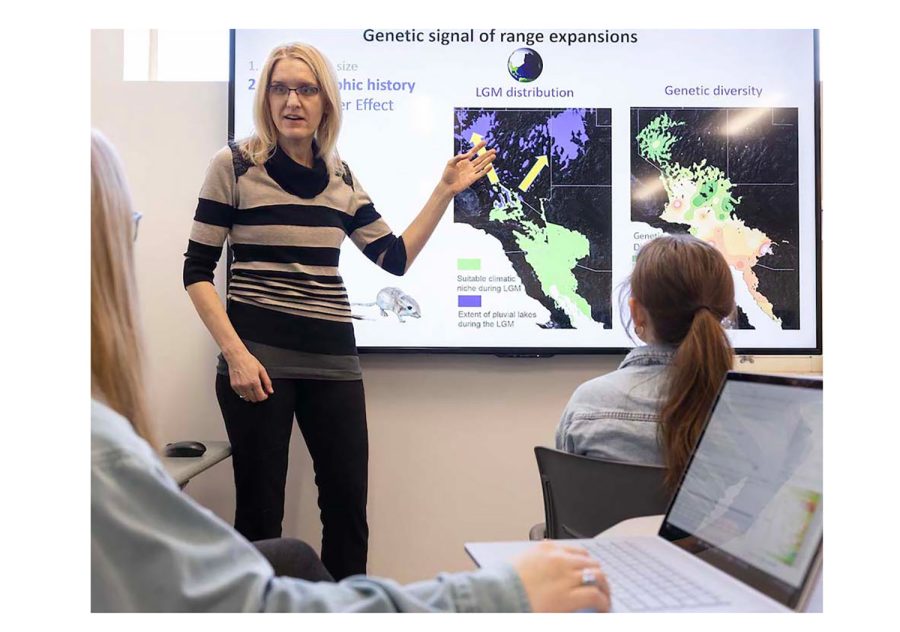 Miami professor Tereza Jezkova recently received an $822,391 grant to study what the lowly grasshopper can tell us about species diversity, conservation, and even human health.

Jezkova, an assistant professor of biology at Miami University, won the grant from the National Science Foundation‘s Early Career Development Program, which supports early-career faculty who might potentially serve as academic role models and lead to advances in the goals of their departments.

With the NSF grant, Jezkova hopes to learn about niche diversification which refers to the varying ideal environmental living conditions of identical or related species. Jezkova will work with more than 150 species of grasshoppers from North America.

The fact that so many similar species live in very dissimilar environments is a key reason for studying the grasshoppers, according to the NSF’s explanation of the grant’s purpose.

The researchers may be able to answer questions on diversity such as why so many species exist in the tropics; on its conservation, such as how much can a particular environment change before a species can’t live there anymore; or questions on human health, such as whether and how tropical diseases spread to more moderate areas, according to the NSF site.

“Tropical diseases that have always been constrained to the tropics, maybe these pathogens of these bacteria… will change their niche and spread into the moderate climate,” Jezkova said. “Understanding how the niche can shift, which direction and how much and how far, has a lot of applications.”

Jezkova said that she always knew she would apply for the grant, but earning it would be difficult given it is considered a prestigious award. It took her three years to develop the idea for the research and another year to revise it. However, she did not win the grant the first time around. Then, after another year of improving upon her plan, Jezkova got the grant.

“This is a grant that almost every professor at the assistant professor [level] kind of hopes to get; that’s kind of the holy grail of grants,” Jezkova said.

Jezkova’s primary field of interest is mammals and reptiles, so she said that deciding to use an insect as the model organism in her research was scary. However, she recognized that grasshoppers were the right pick for her research as they are abundant, easy to catch, and don’t require a permit to study.

Jezkova had to do a lot of planning, research, and development before she could apply for the career grant. She worked with undergraduate and graduate students in the Jezkova Global Change Biology Lab at Miami to develop ideas, create the grant proposal, and even catch some grasshoppers herself.

“My students make fun of me all the time, they think I’m a mess because I’m always unprepared; I forget my net and chase [the grasshoppers] with my hat,” Jezkova said.

One of the students she worked with was Alfredo Ascanio, a graduate student studying for his master’s degree in ecology, evolution & environmental biology. Ascanio helped Jezkova develop the methodology used in the proposal to the NSF.

Ascanio said that this research could help improve conservation and be used to predict the future of many species.

“Understanding species diversification kind of allows us to assess in a better way where will new species up here or where will current species disappear,” Ascanio said. “That has implications, not only in conservation but within agriculture. If you have a species that’s moving towards a place that has more crops… that has economic implications.

Because of the grant, Ascanio will be able to take a research assistantship at Miami, allowing him to focus on research and not have to teach any classes at Miami as he would usually be required to do.

With the grant from the NSF, Jezkova has hired a postdoctoral entomologist who will lead the project. The researcher specializes in grasshoppers and will travel around North America collecting samples for three years. Jezkova estimates that approximately 2,000 species will be collected from the United States and Mexico by the time the study is complete.

Once all the data on the grasshoppers are collected, Ascanio will begin to quantify the environmental conditions that each species can occupy and begin to understand how closely related species are. At the same time, Jezkova will be advising several undergraduate students on their independent research related to the study.

Opportunities for undergraduate researchers to become involved with the grasshopper study can be found on the Jezkova Global Change Biology Lab website.