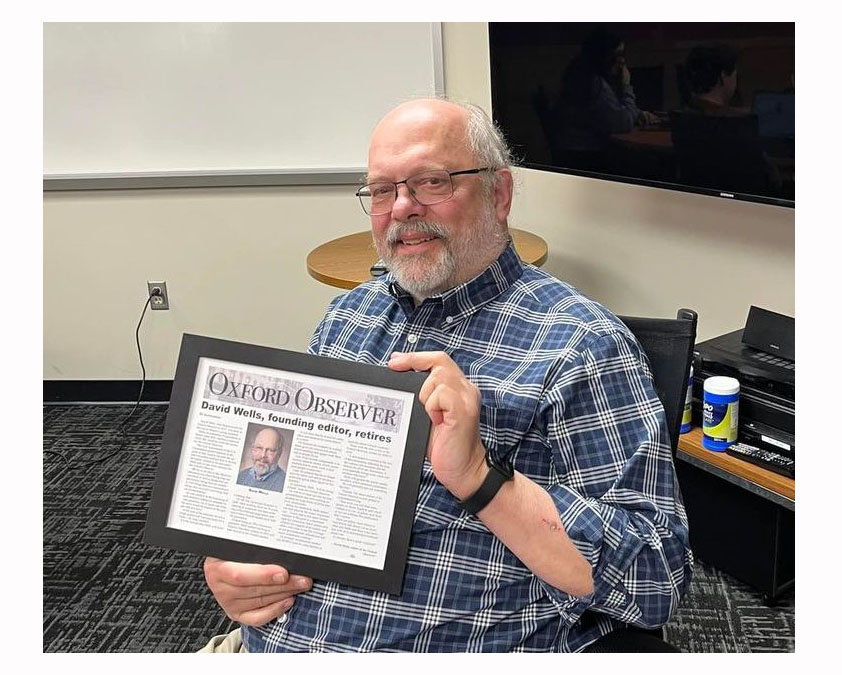 Oxford Observer Editor David Wells celebrates his imminent retirement on Wednesday with his student staff and a mock front page of the Observer.

David Wells, the only editor the Oxford Observer has ever had, will retire from Miami University at the end of this semester. Next week’s issue will be his last.

Readers of the Observer may only be familiar with Wells through his occasional editorials and weekly emails that tout each new edition and begin: “Friends, The latest edition of the Oxford Observer now is posted at oxfordobserver.org .” After describing a few of each week’s stories, the emails end with: “There is a lot more to read about and to comment on. Tell us what you think and send us your news tips in an email to [email protected]. As always, have a great weekend!”

Behind the scenes, Wells was instrumental in shaping the Observer into what it is – a free weekly online news site that covers the city of Oxford and surrounding townships of Talawanda School District. The reporters are Miami journalism students, mostly from his senior capstone reporting class.

In addition to running the Observer, Wells also teaches two sections of introductory news writing and reporting every semester.

The opportunity to be the editor for the Observer fell to Wells after the Greater Oxford Community Foundation came to Richard Campbell, the then-chair of Miami’s  Department of Media, Journalism &  Film and asked him to do something about the fact that Oxford no longer had a weekly newspaper. The Miami Student, run by students, covered the university and campus life, but there was sparse coverage of news about the town and the non-university parts of the community.

After tossing around who should be in charge of this new local news source for about a year, Campbell and Journalism Area Coordinator Patricia Gallagher Newberry approached Wells and asked him to be the editor of the Oxford Observer. If you ask Wells, he thinks they told more than asked.

Nonetheless, he was happy to do it.

Campbell said Wells was a good choice because he is  a great reporter and editor, and already had the experience needed.

“I always thought David was the right guy,” Campbell said.

Prior to joining the Miami faculty in 2012, Wells spent 35 years as a reporter and editor with the Cincinnati Enquirer in various sections of the paper. He spent time as the metro editor and as the editorial page editor.

“When this all started, it was unclear exactly what the community wanted and what kind of interest there was out there,” Wells said of the Observer. “What we decided was, this is what we could give them, and we would do our best.”

The Observer started with three student interns in the summer of 2017, then a handful of students for the fall 2017 semester. Their goal was to come out with the first edition midway through the semester, but after just a few weeks of prep during August, the first edition came out on the first Friday of the new semester. The Observer has not missed a scheduled publication date since, although it does routinely take breaks around the December holidays and for four weeks in the summer when the student reporters are on vacation.

Campbell said he knows the Observer is important to the Oxford community, but said he wishes it were more important to leaders at the university. He said this is a great way to build a good relationship between Oxford and Miami, which is something that the university is always looking to do.

Each of Wells’ students takes on a beat, or a topic, to focus their reporting on for the semester. These typically include government, education, police, arts and more.

The Observer still runs during summer and winter semester breaks with the use of Miami interns. The funding for the Observer mainly comes through the Greater Oxford Community Foundation and Miami’s Menard Family Center for Democracy.

A separate class run by Miami Professor Sacha DeVroomen Bellman acts as the Observer’s copy desk and posts each issue on Fridays.

When the Observer began, Wells said he went around to various organizations in Oxford to let them know an online newspaper was forming, so they were not confused when reporters began knocking on their doors.

“When we were about three or four weeks in, I said I really thought we’d made it because the local funeral home called with our first obituary,” Wells said. “Somebody in the community accepted us as the local press where they wanted to have their family member’s obituary posted.”

Now, the Observer earns around 2,400 page views per week. It became especially important to the community during the COVID-19 pandemic. Currently, the stories that have had the most views are one about COVID misinformation and another about an impending COVID lockdown.

What does retirement hold for Wells? He often asks himself the same question.

He plans on doing some traveling and spending time with his family, including his two children and four grandchildren and his two brothers. He will also be rebuilding his koi pond and maybe getting a dog, if his kids have anything to say about it.

When he was younger, he joked that a great retirement plan would be to downsize, move to a coastal town on the Outer Banks, and clean rental properties on weekends, because you never know what treasures people will leave behind. He would live on a campground with a Labrador retriever and eat cans of left-behind SpaghettiOs, supplemented by fish he caught off the beach.

“That sounds like a great retirement. I could get a trailer by the sea,” Wells said. “No, I probably won’t actually do that.”

More likely, he said he may try his hand at flipping a house or two to keep himself busy.

Future reporters for the Observer may miss out on Wells’ extensive supply of stories from his time as a reporter, but they will still be covering all that happens in the town. Miami Professor Steve Siff will take over as the editor of the Observer beginning May 23.