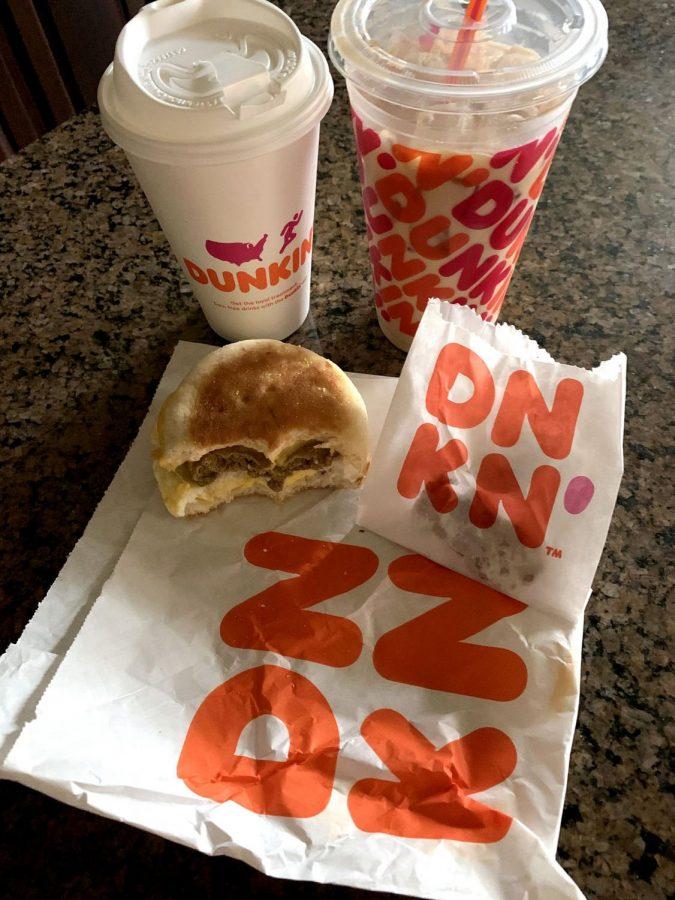 The Egg, Cheese and Beyond Sausage sandwich now is featured on Dunkin’ Donuts menu. Photo by Emma Hendy.

The trend of plant-based proteins are taking the fast food industry to a new level in Oxford and around the nation. Dunkin’ Donuts is rising to the challenge by serving plant-based sausage on a breakfast sandwich.

Dunkin’ partnered with Beyond Meat to create its sausage patty as did Burger King to create their Impossible Whopper. The release date of the new “sausage” vegetarian sandwich was accelerated due to its success at the first release in July in Manhattan, New York. The sandwich quickly became the number one breakfast seller for vegetarians and meat eaters combined.

Kristen Hards, a Miami University senior, was skeptical at the smell of the plant-based patty. “The bread seems denser than the other breakfast sandwiches there and the patty tastes a lot spicier than I was expecting,” said Hards.

However, Hards would recommend the $4.19 sandwich to meat eaters and non-meat eaters depending on their love for spicy foods.

The patty is made out of mung beans, peas, coconut oil, sunflower and rice. Mung beans are legumes and more commonly used in Asian cuisine in stir fries. One cup of boiled mung beans contains 14 grams of protein, 15 grams of fiber, folate, magnesium, iron, potassium, zinc and vitamin B12. These legumes also contain antioxidants that can reduce the risk of inflammation, heart disease and cancers.

Mackenzie Brown, a vegetarian of five years, became a vegetarian to support sustainability in the food industry. “I really liked the Dunkin sandwich because it had substance like a meat sandwich would. I still like the idea of having a protein-based component of a sandwich,” said Brown.

Plant-Based Is Here to Stay

Nancy Parkinson, registered dietitian and clinical nutrition lecturer at Miami, says the reason for the rise of plant-based protein products is awareness.

Based on a 2018 survey by the consumer website Statista, 52% of consumers in the United States prefer plant protein over animal protein because of the taste, followed by environmental concerns, animal protection and concerns over diet. 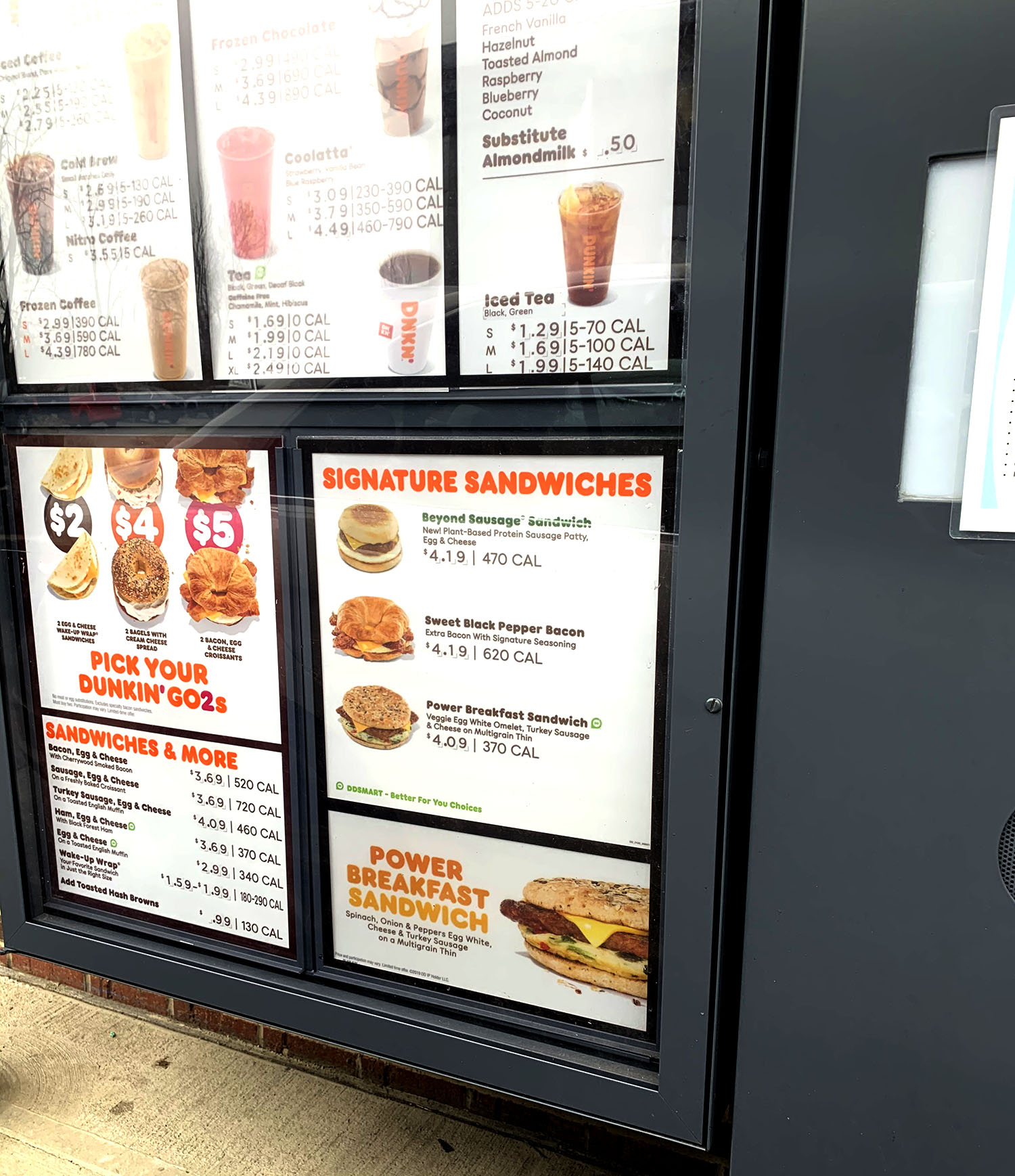 Consumers can pair their sandwich with hash browns and their favorite coffee. Photo by Emma Hendy

‍“What a lot of people don’t realize is that these products have been 10-15 years in the making,” said Parkinson.

Research and investments into alternative meat options have made meatless days more convenient for vegetarians and meat consumers. Even for those who prescribe to a flexitarian of someone who mainly eats a vegetarian diet but will occasionally consume meat or fish.

Due to the high consumer demand for sustainability, avoiding allergens and the convenience for vegetarian or vegan lifestyles are causing the food industry to look towards plant-based diets. Due to the new awareness, the plant based market is set to grow 8.1% from 2019 to be $14.32 billion by 2025.

In 2018, seven out of 10 Americans say they were taking active steps to increase their plant based protein consumption. 52% of Americans had made dietary changes to consume plant protein.

Beyond Meat is a brand of plant-based protein that has been partnering with restaurants to allow families to enjoy traditional meals sustainably with meat alternatives. The company not only partners with Dunkin’ Donuts and Burger King but also Subway for the Beyond Meatball Marinara sub, KFC for plant based fried chicken and A&W for a Beyond Meat burger.

Products are not only in restaurant business as plant-based protein can be found at your local grocery store. Morning Star veggie chicken strips and bean burgers can be found in the frozen section next to other frozen breakfast dishes. An egg substitute can be found next to chicken eggs called JUST Eggs.

JUST Eggs are a breakfast protein that are able to scramble the same as regular eggs. This protein is made from mung beans like the Dunkin’ sausage.

The JUST Egg is cholesterol free and dairy free. The protein in the JUST Eggs of 5 grams is comparable to dairy eggs at 6 grams. It can be used to make frittatas, French toast, omelets, stir fries, waffles or breakfast sandwiches.

The American Heart Association says It is clear that eating less meat has the benefits of reducing the risk of heart disease, stroke, obesity, high blood pressure, high cholesterol, type 2 diabetes and some cancers.

A report by The Lancet medical journal says that 11.6 million lives could be saved globally if a plant-based diet became a part of daily life.

Protein can be found in vegetables such as artichokes, asparagus, broccoli, brussels sprouts, collards, corn, potatoes, peppers, spinach, sweet potatoes and turnip greens. Many vegetables consumed daily may contain protein that many consumers are unaware of such as tofu, quinoa, mushrooms, lentils, chickpeas and beans. However, it is important to be aware of foods that may not contain meat or any protein such as processed foods like chips and sweets.

However, a study in the American Journal of Clinical Nutrition compared plant protein to lean protein like poultry. Plant proteins resulted in lowering bad cholesterol when put up against white meat.

Parkinson said it is not necessary to switch to a vegetarian diet to be healthy. “I would say it really depends on the person. You can eat lean turkey or chicken without the skin but I really like the variety of plant-based options,” said Parkinson.