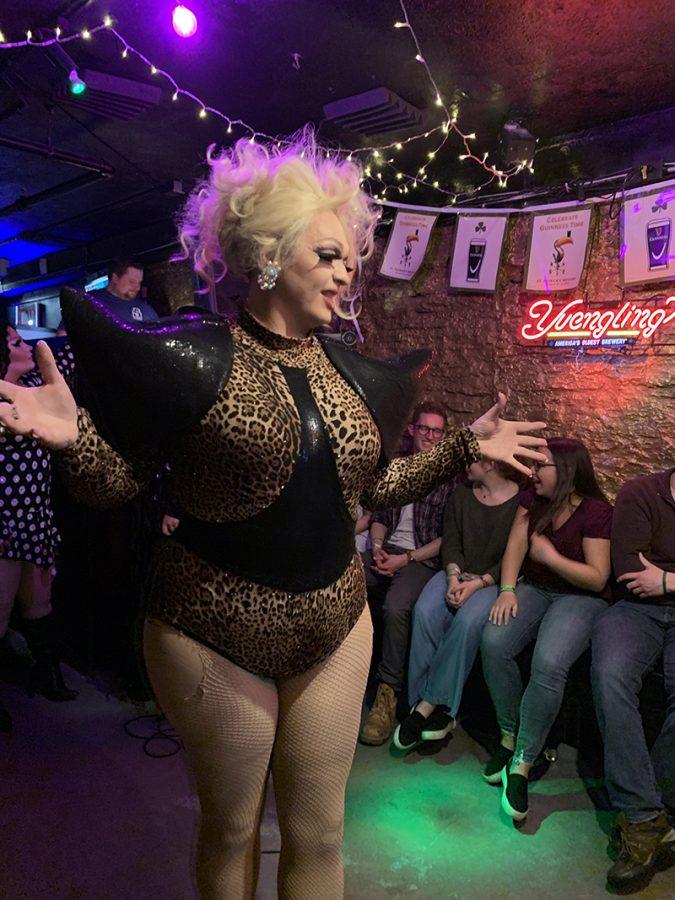 Drag shows in Oxford have been on and off in recent years, but Bar 1868, 13 W. High St., has consistently staged them each month since September. The shows are gaining popularity.

On March 13, the performers played to a packed house starting at 10 p.m.

One hour before the start of the show, the drag queens had their makeup on while wigs and costumes were scattered everywhere.

“I’m really glad that [the shows] are back on because it gives queer, LGBTQ+ Miamians space in an otherwise pretty toxic environment. It’s nice to have a place that recognizes you,” said P.H. Dee, one of the performers.

P.H. Dee, a.k.a. Joshua Jones, is the president of Miami’s Grad Student Pride Association (GSPA). The P.H. Dee identity was born through a GSPA fundraiser held at Bar 1868.

Jones’ graduate faculty advisors asked what she really wanted to do, and after considerable thought, she decided to do an amateur act at the fundraiser.

“I needed a creative outlet,” Jones said. She enjoys navigating the dynamic of being a performer and a grad student teaching classes.

The March 13 show was more than two hours long with a variety of acts from dancing, character performances, banter and song.

A variety of students filled the sitting and standing room of the underground bar. People were packed in tight, singing and dancing along with every act.

“It’s the best gay bar I can find in this area,” Miami senior Ethan Schlarb said.

Kisha Summers, a drag performer who also manages the bar’s line-up, loves the reaction from the audience.

P.h.Dee performed a character act on Wednesday, and the crowd loved it. She did a “Cruella de Vil” bit with multiple wigs and audio clips from 101 Dalmatians.‍

For P.h.Dee, character acts are the most challenging part of drag, along with fake nails. Preparation is a tedious process; it typically takes two hours for makeup, another hour for outfits, and additional time to “pack” their bodies to create the desired look.

Summers explained the show is usually a set cast, with one special guest each month, depending on popularity. She is also a member of Starlight Productions, a drag troupe based in Cincinnati.

Many of the current performers are from the Cincinnati area or Northern Ohio, with only a few local performers. P.H. Dee hopes to see an increase in local involvement at these shows.