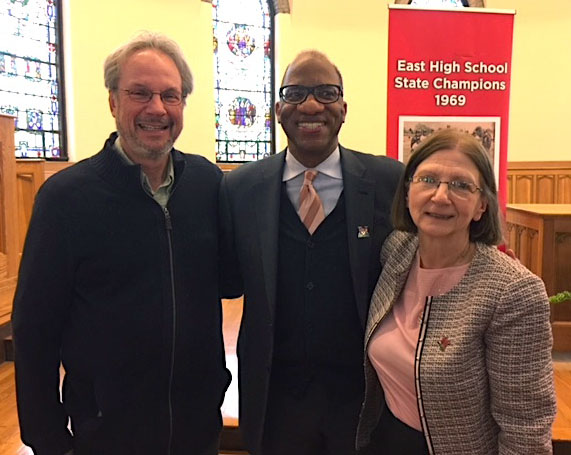 Dr. Richard Campbell, former chair of Miami University’s Department of Media, Journalism, and Film, has been awarded the Benjamin Harrison Medallion for 2019.

The Harrison Medallion, named for U.S. President Benjamin Harrison, Miami class of 1852, is presented each spring to one Miami faculty member in recognition of “extraordinary contributions related to teaching, research and service.” Nominees must be current faculty who have served as professors for at least eight years at Miami and who have exemplified high teaching standards, achieved national or international recognition in their academic discipline, have a record of service to the university and demonstrated influence beyond their discipline that has benefited the university or the public.

Campbell’s restructuring of Miami’s journalism program, his authorship of a leading textbook on media and culture, and his role in ensuring local news coverage of Oxford all factored into his selection for the award.

Nominations are reviewed by the University Senate Awards and Recognition Committee, but the university president and provost make the final selection.

Recipients in recent years include Dr. Tammy Kernodle, a professor of musicology who has written and contributed to several books on women and African-American music, and Dr. Linda Marchant, a professor of anthropology who has received two national awards for her primatology research.

“Without Richard Campbell, there would be no Department of Media, Journalism, and Film, at least not as we know it,” Dr. James Tobin, a journalism professor and close friend of Campbell, said.

Campbell came to Miami in 2004 to transform the journalism program from a subset of the English department into its own distinct department. He then combined the program with the Department of Communications, serving as interim director. He most recently helped design and served as the founding chair of Miami’s Department of Media, Journalism & Film, moving the remaining journalism offices from Bachelor Hall into Williams Hall.

“When he moved [journalism professors] over from Bachelor, he put people who didn’t know each other next door. The department is more commingled now, which has been good for all of us,” said Patti Newberry, the department’s journalism coordinator.

Throughout these transitions, Campbell’s commitment to the importance of a liberal arts education was evident.

“Students need to practice skills, like writing and TV production. I wanted to balance skill-based education with liberal arts in a mission to give students broader education,” Campbell said.

In this spirit, Campbell introduced the requirement for journalism students to double major.

As an administrator, Campbell was supportive of new projects and new approaches toward teaching the students. He was known for eschewing the red tape that often entangles new ideas. “He ran this department like a benevolent dictatorship,” Newberry said. “He’s the guy who always says yes, I’ll help you make that happen.”

Campbell is also well-known for his teaching abilities.

“He’s just a great touch with students. They sensed that he had a genuine interest in them, regardless of their field,” Tobin said.

“Richard Campbell was the entire reason I came to Miami,” sophomore Anna Minton said. Minton met Campbell at an event for prospective students and was impressed with the department and Campbell’s passion.

Campbell’s leading media studies textbook, “Media and Culture: An Introduction to Mass Communication,” has been used at over 430 colleges and universities. He keeps it updated regularly and it is well-regarded in the field for its accessibility and cultural approach to the subject.

Campbell’s impact is not limited to the academic world. He’s passionate about getting coverage for local and urban areas that are neglected by existing media outlets, referred to as “news deserts.”

To that end, he worked with the Oxford Community Foundation to bring local reporting back to the town, after the Oxford Press was folded into a Sunday four-page spread inside the Hamilton Journal News.

The Oxford Observer is the result of that initiative, which combined funding from Miami and the Oxford Community Foundation to staff an online weekly newspaper. The reporters and editors of the Observer are students and faculty from the Department of Media, Journalism, and Film.

“It hasn’t been around that long, but it’s already been favorably received,” said James Rubenstein, who orchestrated the creation of the Observer with Campbell and former College of Arts and Sciences Dean John Skillings. “It was Dr. Campbell’s job to put the pieces together at the university. It’s a complicated bureaucracy and that took skill to navigate.”

“It’s the community that I live in, so I want it to have good journalism,” Campbell said. “It’s also an example of responding to the online world today.”

Campbell is also working on an initiative called “Report for Ohio” which he describes as his “retirement project.” The project aims to get coverage for other areas in southwest Ohio, particularly those without regular news coverage.

“He has a powerful interest in the public role of journalism, and it has served him and the university well,” Tobin said.