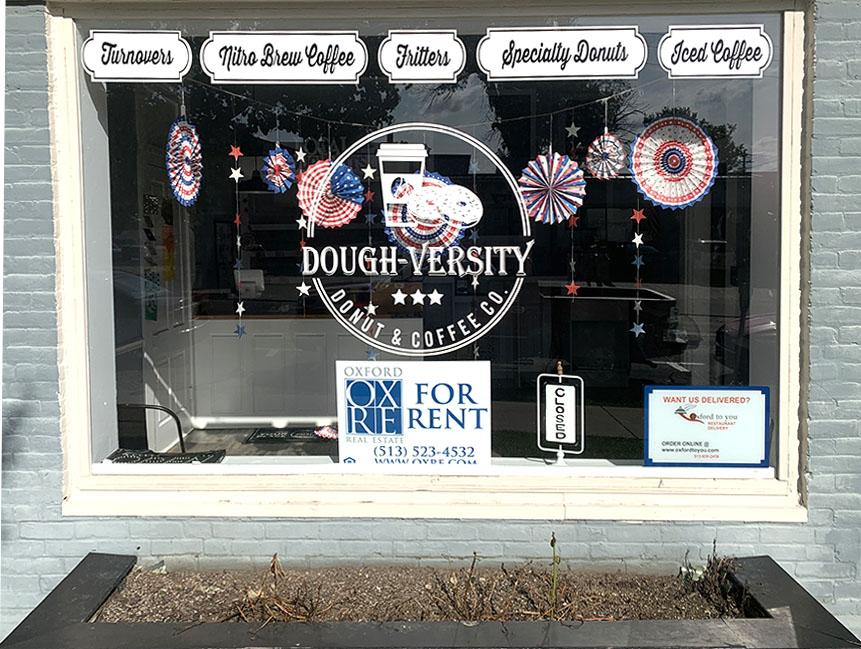 Dough-Versity, had many fans, but not enough to keep the Beech Street store in Oxford. Photo by David Wells

Dough-Versity Donuts & Coffee, a local donut shop on 5 S. Beech St. in Oxford, has closed after being in business for about a year. It was one of three donut shops in town.

On June 30, Dough-Versity published on Facebook that the business was taking a “vacation until Miami students returned in August.”  That vacation became permanent.

In another Facebook post, published Aug. 26, the owner said, “we were working with a local restaurant to stock our tasty donuts, but it just didn’t work out.”

The owner, Kim Lim, could not be reached for a direct comment.

Dough-Versity opened June 1, 2018, which happened to be National Donut Day. The shop did not do its own baking, but was supplied with donuts from other shops in the region, including Daylight Donuts in Mason and Eaton, and Bismarck Donuts in Richmond, Ind. Those stores, which stock some of the varieties that were favorites at Dough-Versity, remain open.

The Observer crowdsourced opinions and memories Oxford residents had about the local business closing using Oxford Talk (OHIO), an Oxford community Facebook group with over 10,000 members.

Based on the 28 responses, Dough-Versity favorites were the Nitro Coffee, the Maple Bacon donut and the Pinecone.

“We enjoyed going to Dough-Versity after visiting the Farmer’s Market or Saturday morning soccer. My boys loved visiting and enjoying their donuts at the tables with the high stools,” said Oxford resident, Molly Farler. “It was great family time. We appreciated the wide variety of donuts.”

Aryn May, manager of the family owned Bruno’s Pizza, reminisced about the “lil donut date” she had twice a week with her 3-year old son.

“They had the best drinks in town. As soon as we entered the shop my son quickly scurried over to get his juice while Jenny waited patiently to hand him his cup of donut holes and sticker,” May said. “The flavor was something you couldn’t replicate. Although it was delicious, it was the experience that separated itself from others.”

Jenny Marcum, an employee at Dough-Versity, helped manage the day-to-day operations at the store. She wasn’t just an employee, but a welcoming face for her customers.

“I will miss all of the wonderful customers who became friends and family, as well as my amazing coworkers,” Marcum said. “I truly loved my job there. It was a wonderful place. Beautiful atmosphere, amazing customers and employer.”

Dunkin’ Donuts on 431 S Locust St. and the Oxford Donut Shoppe on 120 S Locust St. are still available to satisfy any donut cravings.