Arts Center building serves Oxford throughout the years starting in 1849 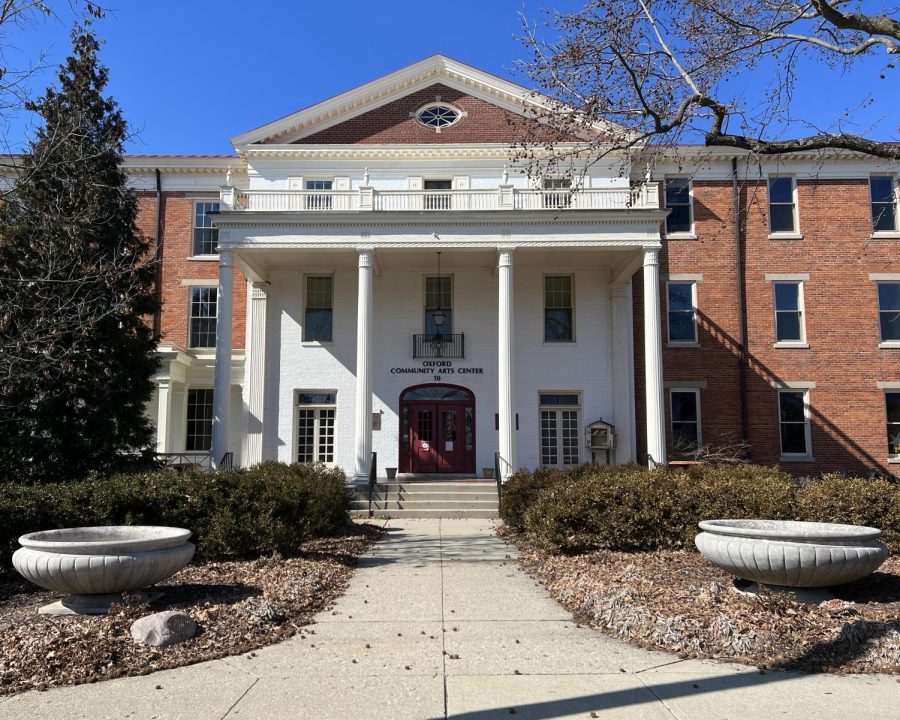 The front entrance to the building, built in 1849 originally as the Oxford Female Institute.

The Oxford Community Arts Center at 10 S. College Ave., began life as a finishing school for young women, The Oxford Female Institute, in 1849.

Throughout the years the building that dominates the western end of Oxford’s “Uptown,” has undergone many structural changes. In 1856, a three-story building was built and connected by a walkway to the original school. In 1867, the Oxford Female Institute and Oxford Female College merged, eventually being renamed the Oxford College for Women in 1906.

Miami University took ownership of the building in 1928 and utilized it as a residence hall until 1998, giving it the moniker “Ox College.” The university closed the building in 1998, but not long after, a group of Oxford residents wanted to preserve the historic site while also creating an arts center for Oxford residents, and the Oxford Community Arts Center was born.

The center, run by a board of trustees, leases the building from Miami for a nominal payment and supports itself primarily through gifts, and donations. The third floor includes 30 studios rented to local artists and musicians. The ballroom and parlors on the main floor may be rented for weddings and other events.

The building sits at the corner of East High Street and South College Avenue, with a sprawling lawn. Artworks, including some that are for sale, are on display in the main hallway, ballroom, and parlors. There also is a gift shop on the first floor.  A full schedule of programs and events at the center can be found on its website.

The ballroom is wrapped in windows, letting in plenty of sunlight to give it a golden hue and a perfect place to appreciate art.

Outside the building is home to many sculptures and statues dedicated to its origin. One statue in the garden is of Caroline Scott Harrison, an alumna of the Oxford Women’s Institute, who married Benjamin Harrison and became first lady of the United States.

There is also an outdoor space for theatre performances. Above the lawn a terrace wraps around the building, giving a southern aesthetic to the design.

The building also has a space that originally served as a chapel but has since been converted to host theatre performances and monthly movie nights.

This story is the latest in a series of photo essays highlighting historic buildings in and around Oxford.