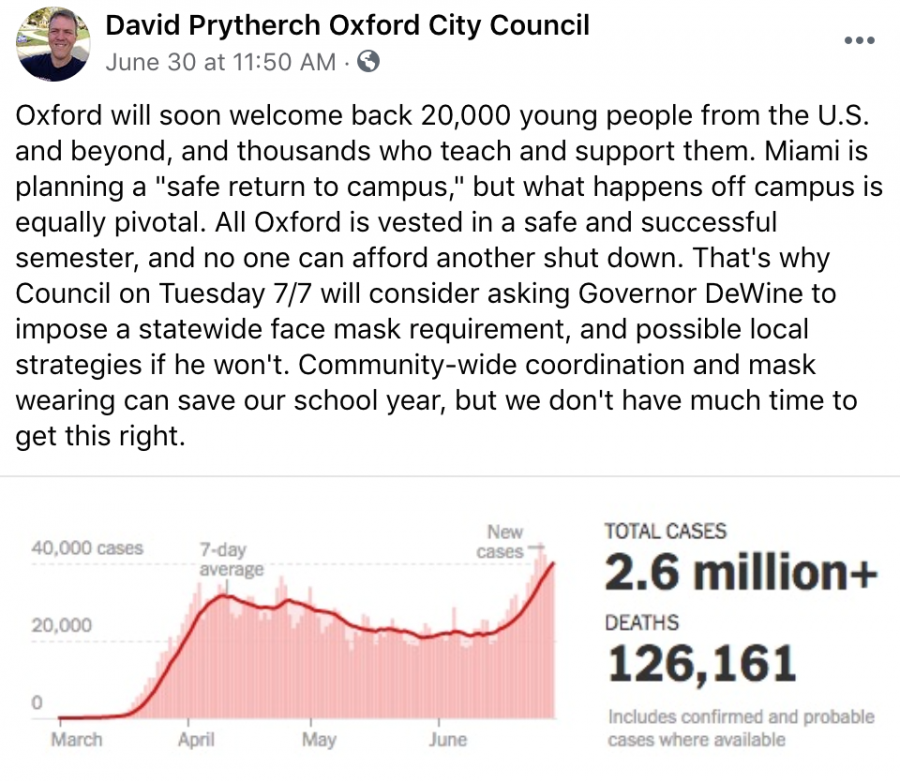 With coronavirus cases rising in Butler County and across the country, Oxford City Council will consider asking Ohio Gov. Mike DeWine to make a statewide mask mandate, or even adopt its own requirements for mandatory masks.

Councilman David Prytherch proposed the idea on his Facebook page this past Tuesday with support coming from Councilman Bill Snavely and Mayor Mike Smith. It is their hope that masks will prevent another costly shutdown for a town already reeling from students leaving three months early.

At a Thursday press conference, DeWine strongly urged people to wear masks when they go out in public to reduce the chance of spreading the virus. However, he resisted the idea of making masks a state mandate, saying he prefers that such decisions be made on a community by community basis based on data about local rates of infection.

Butler County is now considered a red zone with a “very high” risk of exposure to the virus, according to the state’s public health advisory system. The daily average number of cases in the county has doubled in the past week, DeWine said Thursday. Red is the second-highest level of risk in the state’s rating system.

“A face covering is a good thing no matter what color your community is,” Ohio Lt. Gov. Jon Husted said at Thursday’s press conference. Dayton and Columbus, which also have red ratings, have mandated face masks be worn in public beginning today (July 3), and Cincinnati City Council is scheduled to vote on a mask mandate there today.

If Miami wants a safe campus for its returning students, Prytherch said he believes Oxford needs to hold its end of the bargain. Students, faculty and staff are being encouraged to wear masks when they return to campus in August.

“All students circulate off-campus and about 50% live off-campus,” said Prytherch, who also teaches in Miami’s Department of Geography. “So, to have a safe semester, we need to make sure what’s happening off-campus aligns with and supports the safety precautions of Miami.”

Many businesses in the community, some of which are just reopening, already have masking requirements to enter. Still, some Uptown owners do not prevent customers without face-coverings to enter out of fear of pushing away business. With a statewide or local order, this pressure would be lifted off these operations.

“I just hope everyone would think about others when they choose to not wear a mask,” said one store owner, who wished to remain unidentified. “Yet, the customer is always right, so how can I tell someone no.”

Consensus on the masks has shifted in the medical community. In late February, U.S. Surgeon General Dr. Jerome Adams asked Americans on Twitter to stop purchasing masks to prevent shortages for healthcare providers. It was believed at the time that masks were “not effective in preventing” the general public from getting the coronavirus.

Now research suggests the masks, along with social distancing and handwashing, can significantly reduce the risk of contracting the virus. A group of international experts found that if 80% of people donned masks, fewer people would die than maintaining a lockdown. 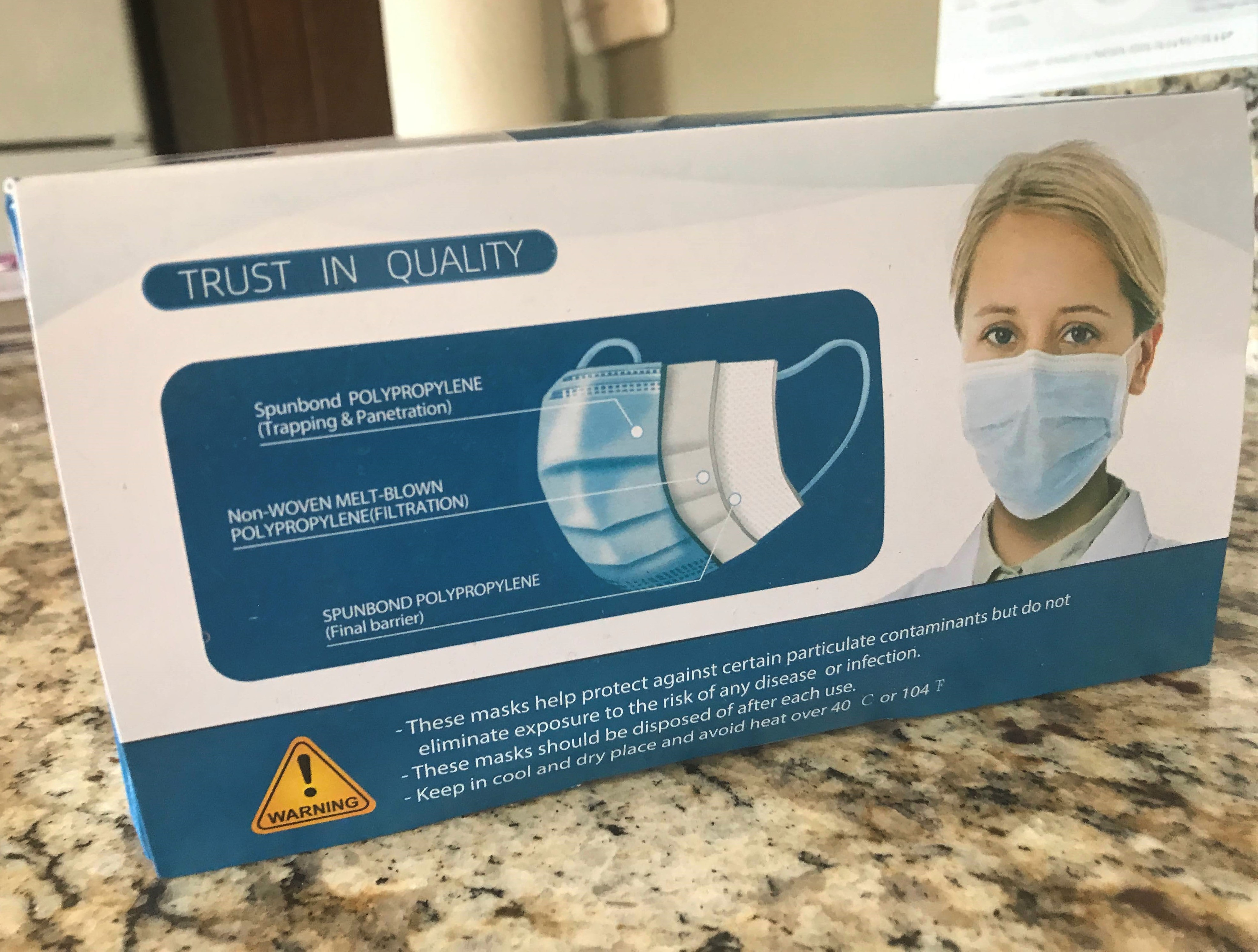 Single-use masks are now widely available in stores and cloth masks also work and can be easily made, as shown in this Observer story from earlier this year.

Most who commented on Prytherch’s post sided with him, but there were still a few detractors evident of the growing debate throughout the country.

Ohio Rep. Candace Keller, (R-District 53) whose district includes Oxford, posted Thursday on Facebook that she and her husband had been forced to leave the welcome center at the Gettysburg battlefield Wednesday, because they refused to wear masks inside. In the post, she said the masks were not legally required in either Ohio or Pennsylvania and that she and her husband refused to wear them because they were not sick.

To mask or not to mask has been the question for many Americans as the coronavirus pandemic has continued. While many businesses require or encourage visitors to mask, resistance to these requests has occurred and a new cultural divide has risen.

Prytherch said he senses more unification on this issue within the council, adding “I think this council believes in science and is very strongly concerned about public health and the economy.”

“I think this council wants Miami to have a successful semester and knows how much Oxford will depend on that,” said Prytherch.

If the governor does not make a statewide requirement for face covering, Oxford could look into instituting a local policy as other towns in Ohio already have. Bexley, a suburb of Columbus, will start requiring its citizens to mask starting July 3 through July 30.

The Bexley order will be applied in public spaces like retail businesses, theaters, personal care and grooming businesses, office spaces, and restaurants when patrons are not seated. Despite DeWine backing out of a mandate requiring all Ohioans to wear masks in stores, Prytherch said he still has confidence in the governor to lead the state in the right direction.

If not, Prytherch said the council is prepared to build local strategies. The July 7 council meeting will allow the council to figure out the mechanics, but also the bigger picture, he said.

“The conversation will be about masks, but I would say the conversation is really about whether we have a hope of saving the fall semester,” said Prytherch. “Failure to contain COVID means an online semester and catastrophe for Oxford.”

City Council will hold its July 7 virtual meeting at 7:30 p.m. on Zoom. For instructions on how to join the meeting, visit the city website.