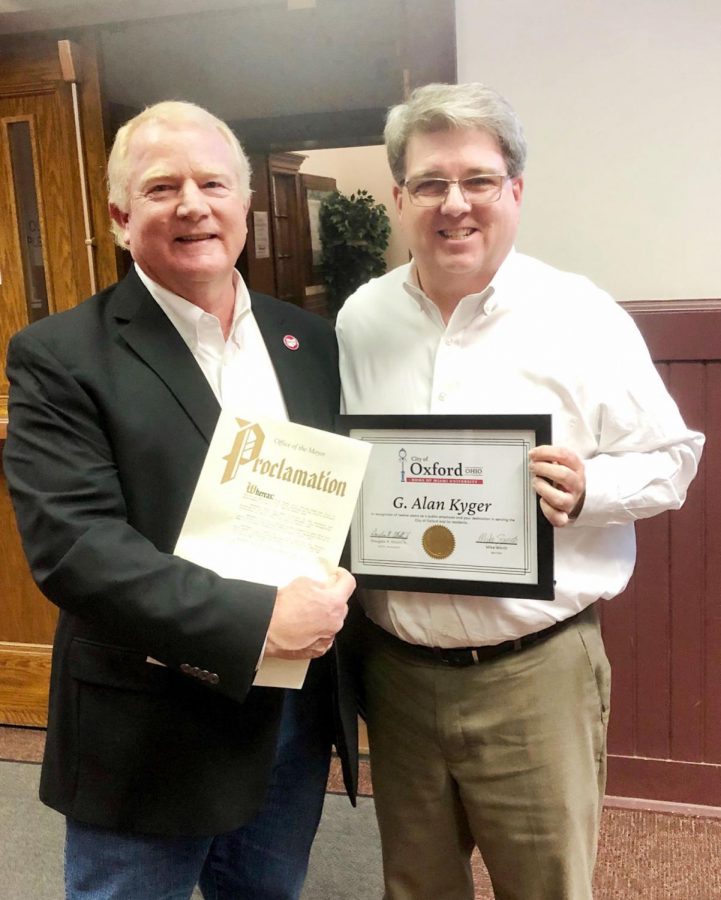 How do you thank someone for over 30 years of service to the city? Oxford Mayor Mike Smith answered that question by proclaiming March 5 as “Alan Kyger Day” in Oxford.

Kyger officially retires from his position as the city’s economic development director March 31. Kyger, 66, served in that role for 12 years, after previously serving on the city council and as mayor.

Kyger started his career in Oxford politics as a business owner with concerns for the city’s plans and budget. The city was planning to widen US 27, which ran past Kyger Chrysler Jeep Dodge car dealership on the northside of town.

“I got involved in the planning commission,” Kyger said. “I had also realized the city had no money to do a project like this.”

Kyger graduated from Miami University with an education degree in 1981. Following graduation, he taught industrial technology at Connersville Junior High School in Indiana. Kyger was then a business owner, taking over his father’s and uncle’s car dealership from 1988-2007, and purchasing a Chevrolet dealership, Kyger Chevrolet Buick, next door to Kyger Chrysler Jeep Dodge in 2000.

In 2007, the year he left council, Kyger shut the door on Kyger Chrysler Jeep Dodge and sold the Chevy dealership.

“I am off council and unemployed,” Kyger said he thought at the time.

Then the position of economic development director opened up, and Kyger took the opportunity to come back into city government for another 12 years.

Former Oxford Mayor Kate Rousmaniere, who left office at the end of 2019, said Kyger was an effective resource to her when she served on council.

“He was a really good sort of solid base for learning about the city,” Rousmaniere said.

Rousmaniere said she looked to Kyger for guidance during her time on city council and as mayor.

“One thing Alan taught me to do is to think in a more balanced way about economic development,” Rousmaniere said.

Rousmaniere said Kyger taught her that you can’t have a good community without good businesses. Rousmaniere applauded Kyger’s personality outside of the office.

“He is like the nicest guy in the world,” Rousmaniere said. “He listens to all sides.”

A relationship with Oxford’s history

Kyger’s family has a deep-rooted history in Oxford. The family was here before Miami University was even chartered in 1809, building a cabin along Four Mile creek in 1805, Kyger said.

Now the senior member of the family, Kyger resides in Oxford with his wife, Martha. He has two sons, Hueston and Griffin. Hueston works at University Motors in Oxford, and ran unsuccessfully for a seat on the city council last fall.

Walking uptown, you’ll see the Kyger name on the High Street building that houses Phan Shin restaurant. The building was built in 1931 by Kyger’s grandfather, and was used as a car dealership until it moved out of Uptown. According to Kyger, he inherited that building from his aunt after she died about six years ago. That’s when Kyger made the decision to renovate the building. 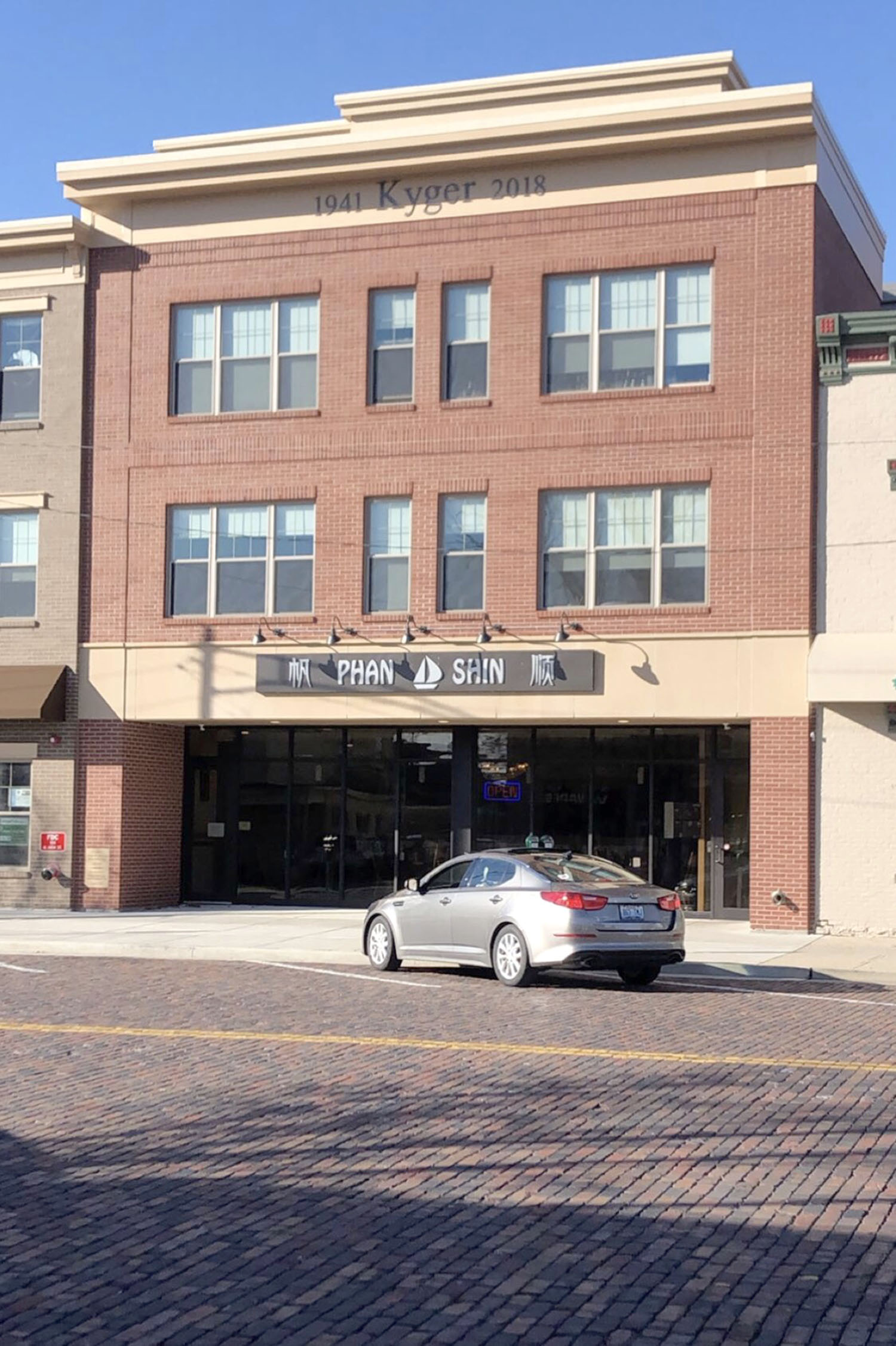 The Kyger Building on High Street originally was the family’s car dealership. Photo by Halie Barger

Kyger has taken on many projects throughout his time on city council and serving as the economic development director for Oxford. In 1993, he campaigned to raise the city income tax. This allowed more funding for needed capital improvements. Following those efforts, Kyger was awarded Oxford Citizen of the Year award for his work on passing the tax increase, and won re-election to council.

“I think that just shows how much the citizens of the community realized this (the tax increase) needed to be done,” Kyger said.

The following year he moved into the mayor’s chair.

“That was a good year I guess,” Kyger said.

Many changes made and some still needed

Kyger said he has watched Oxford grow over the years, but doesn’t think all of the changes have been positive.

“Oxford is struggling to retain young professionals,” he said. “The change I’ve seen is we are no longer a balanced town.” Kyger noted that Oxford used to be 50-50 with townspeople to student ratio. Today, the town is about 75% students, he said.

Kyger said the city needs to do things that keep it a unique town. Such as bringing in more locally-owned businesses.

Kyger told the council when he was first a member of the city council, Oxford’s water was piped in from Hueston Woods. He also cited projects that were familiar to current council members such as the OATS trail they had wanted to be put in the comprehensive plan back in the 90s. He even joked about debates that were required before council agreed to establish Oct. 31 as the official day for Trick-or-Treat in Oxford.

Members of council had a lot to say on the efforts that Kyger put in during his time serving the community.

“He and I came in together to the city council in 1987 and we worked well together all that time,” Councilor Bill Snavely said. “I will definitely miss Alan’s presence at the table.”

Kyger, along with Assistant City Manager Jessica Greene, also presented council with a proposal for a Business Improvement District on Tuesday. This is a plan for business owners to come together, and fund things like sidewalk cleaning, decorations, and other aspects that in the end may draw in more business, according to Kyger. Kyger compared the project to similar efforts in Hamilton, Cincinnati and Cleveland.

Greene will absorb the position of economic developer for the city.

As for Kyger, in the short term he plans to clean out his basement.

“The long term goal starts after I finish the short term goal,” Kyger said. ”Part of me would like to still be a part of the city but a part of me wonders if it isn’t time to take a break from that too.”