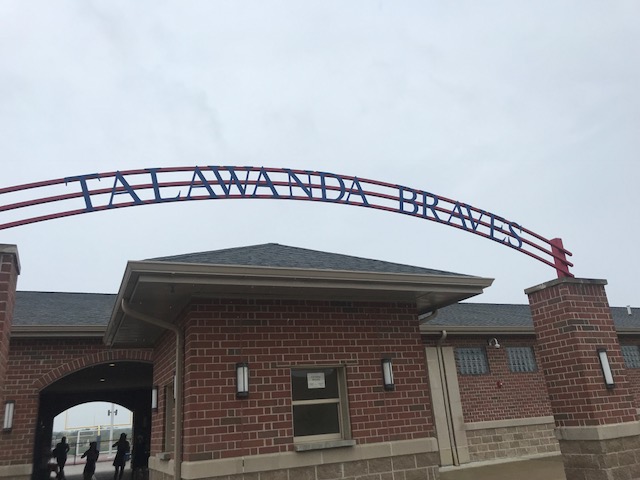 Some district parents and Oxford residents are questioning whether Talawanda should remain the home of the Brave.

The Brave, depicted as the profile of a war-painted face, or more recently, the silhouette of a Native American warrior, has been Talawanda’s mascot since the school district was established in 1956. But in the past 15 years, district residents have complained that the mascot promotes a one-dimensional stereotype that demeans Native Americans.

As a result of recent criticisms, Talawanda’s new superintendent, Ed Theroux, is chairing a branding committee to discuss possible resolutions. The committee, which is made up of parents, staff and community members who were nominated by people within the school district, plans to meet for the first time Monday. Holli Morrish, Talawanda’s director of communications, said the committee will discuss the issue and present recommendations to the school board.

The branding committee will consider logos, images and the district image as a whole, including the mascot.

“What we’ve tried to do is bring parties from both sides of that issue, as well as neutral people,” Morrish said. “My greatest hope is that people are willing to share their thoughts about it, but I also really want people to be committed to listening.”

Kathy McMahon-Klosterman, a member of Talawanda’s climate committee, which is responsible for regularly assessing the state of student life at Talawanda, raised the issue at a June school board meeting after reading a letter from the Native American Rights Fund that claimed the Brave mascot disrespects Native Americans.

“Those who are not Native Americans may not like the change, but they are not hurt by the change,” said McMahon-Klosterman at the August board meeting.

At the school board meeting on July 17, others too expressed their concerns to the board and asked them to consider changing the mascot.

One Talawanda parent, Tamise Ironstrack, was concerned for her children who are citizens of the Miami tribe.

“Now we’re going to have a middle schooler, and he mentioned the thing about playing sports and not really wanting to support the mascot because he sees it as a caricature of what he sees as his identity,” Ironstrack said.

Other schools are struggling with the same debate. The Forest Hills School District in suburban Cincinnati has been discussing Anderson High School’s mascot, the Redskins. After a loud debate, the school district decided on June 12 to keep the name.

In 1997, Miami University changed its mascot from the Redskins to the Redhawks.

On a larger scale, the National Football League’s Washington Redskins is facing criticism from multiple Native American organizations for not changing its name.

The Cleveland Indians of Major League Baseball (MLB), decided to remove the “Chief Wahoo” character from all team apparel starting in 2019.

However, the Atlanta Braves, another MLB team, has not made any changes to its mascot.