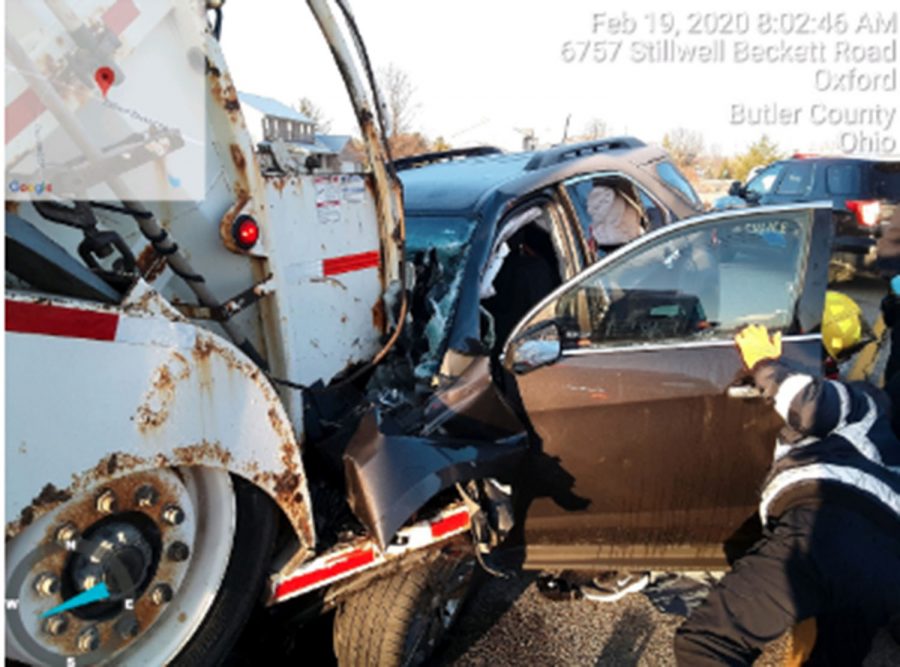 A College Corner woman died Wednesday when her SUV struck the rear of a Rumpke garbage truck that was stopped on Stillwell Beckett Road. Photo provided by Oxford Township Police.

Beverly Ann Street, 50, of College Corner, died Wednesday after her car ran into the rear of a Rumpke garbage truck that was stopped in the 6700 block of Stillwell Beckett Road in Oxford Township.

Oxford Township Police said the accident happened at 7:45 a.m. The truck was stopped in the eastbound lane to make a pickup when it was hit by the eastbound SUV driven by Street. The driver of the truck was standing next to it when the crash occurred.

Street was transported to McCullough-Hyde Memorial Hospital in Oxford, where she was pronounced dead in the emergency room, according to police. The driver of the garbage truck was not injured in the crash.

Although the cause of the accident remains under investigation, Oxford Township Police Chief Michael Goins said police believe glare from the sun may have been a factor.

“From everything we saw at the scene, I believe the sun played a big factor,” Goins said. He said police had a police cruiser do a run over the same stretch of road at the same time of day and from the dash camera footage they could see that the rising sun shines very brightly into the faces of eastbound drivers at that spot.

Goins also said the Rumpke driver had just dumped a trash can into the rear of the truck and taken one step off the road at the moment of impact.

“There were no skid marks which means that she did not hit the brakes,” Goins said. “It’s tragic.”

According to the Ohio State Highway Patrol crash statistics, this was the first fatal accident in Oxford Township since 2018.