These buildings along South Elm Street would have been razed to make way for a new OPUS student housing development. Photos by A.L. Blair

All six council members in attendance voted against it.

This would have enabled OPUS to finalize its property purchase and begin development of student housing on what had been 14 parcels.

Council members outlined their concerns before the vote. Vice Mayor Steve Dana said that the proposal would overturn the Oxford Planning Commission and council’s vision for the city. He did, however, express his admiration for the work that OPUS did in presenting the amendment.

The Oxford Comprehensive Plan gives priority to infill and redevelopment, preservation of small-town character and enhancement of the Mile Square to preserve the city’s overall character.

If OPUS wants to build student housing, it should seek to do so further to the north, where it is called for in the comprehensive plan, said council member Glenn Ellerbe. 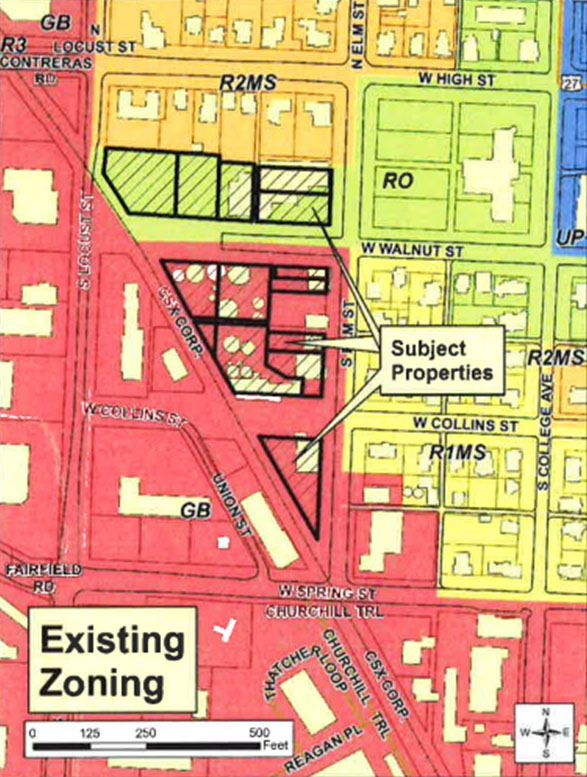 A map from the proposal for the zoning amendment highlights the properties along South Elm, West Collins and West Walnut Street that OPUS is seeking to develop into student residences.

Mayor Kate Rousmaniere suggested that an impending “silver tsunami” of seniors will create a demand for housing in Oxford that she would be happy to work with developers to accommodate, but that she did not think there was a need for additional student housing at the present time.

OPUS representative Ben Angelo addressed worries of OPUS not committing to the area, saying, “Some of the concerns that I’ve heard are that if you were to rezone the property to R3MS and OPUS were to walk away, you’re stuck with, ‘Anybody can walk into our shoes and develop anything they want under R3MS,’” Angelo said, “I think what staff is recommending … would prevent that from happening.”

He referred to the condition in the proposal that in order for the zoning map amendment to take place, all 14 parcels would have to be consolidated. If they are not, then the zoning would revert back to its current state, compelling OPUS to appear in front of the City Council again.

Council member Chantel Raghu asked Angelo, “So if we don’t rezone it, what happens?”

Angelo told her he could not comment at the time.

Before the vote Tuesday, several Oxford residents delivered their feelings on the proposal. Rosalyn Benson argued that the rezoning would be inappropriate. Benson said, “Rezoning should be done for a specific, perceived need. There is no documented need for a large housing complex for students… It’s stated by some of the owners of property, ‘As of September 13, 2018, there was immediate vacancy in several of Miami’s upscale apartments which the developer has claimed are preferred by students.’ ”

Benson, who mentioned several apartment complexes she claimed were concealing vacancies, also said that if the amendment passed, Oxford would be surrounded by student housing in all directions.

Robert Benson, an Oxford resident and architectural historian, spoke against the rezoning proposal. “Changes in zoning are particularly dangerous when they are requested because of their immediate value to the applicant and perhaps even a group of people who would benefit from what the applicant is asking for. Such self-referential zoning rarely has the community in mind,” he said.

Others weren’t so fast to dismiss the proposal. Oxford resident Don Smith argued in favor of the amendment. “If those houses are required to stay, there’s virtually no chance to have business infill in behind them. They would just be behind houses and a train track; you’re not going to get business to go in there,” Smith said.

Smith said that Oxford’s comprehensive plan is important as a guide, not infallible. He told the council, “Spot zoning, while not desirable, should be available to remedy unforeseen possible uses.”