Fundraiser to provide van for child in need 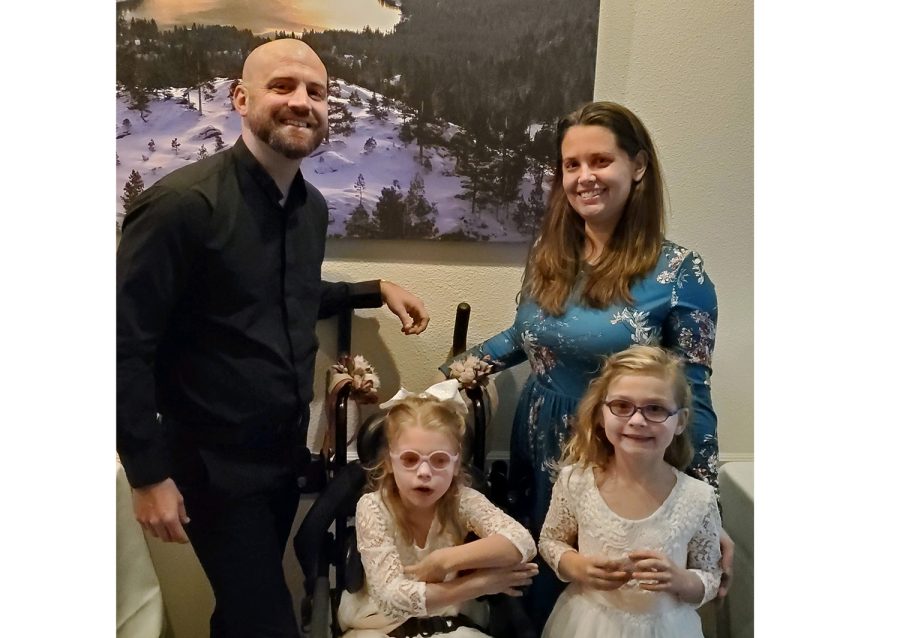 Photo provided by the Henry family

Six-year-old Cora Henry often finds herself sticking up for her older sister Josie even though she’s not willing to admit it. Josie, an 8-year-old, has lived with pachygyria since her diagnosis at 4-months-old.

Pachygyria is a developmental condition due to abnormal migration of nerve cells in the developing brain and nervous system, according to the National Center for Advancing Translational Sciences. With the condition, there are few gyri – the ridges between the wrinkles in the brain – and they are usually broad and flat. Josie is unable to speak and cannot walk.

Josie’s parents, Caleb and Rachel Henry, found out about Josie’s condition when she was 4-months-old. Josie started experiencing infantile spasms, which her parents did not realize at the time. Infantile spasms are a rare but serious type of epilepsy, associated with unique, abnormal brain wave patterns that can cause serious damage to a young developing brain, according to Kids Health.

“It took away her personality. She didn’t smile or interact with us as much,” said Caleb, senior pastor at Oxford Methodist Church. “Technically, in the time period she was having those seizures, most doctors described it as having a four-month long seizure because the seizure activity was constant.”

The Henrys took Josie to Cincinnati Children’s Hospital Medical Center, where doctors performed an MRI. The scan revealed that Josie had pachygyria.
A fundraiser to help Josie get around
Josie needs a special wheelchair, and when the family goes somewhere, she has to be lifted from the wheelchair to a car safety seat and back out again. She has grown to the point where her mother cannot easily lift her in and out of the van. What the family needs is a new van with a specially adapted chair lift. 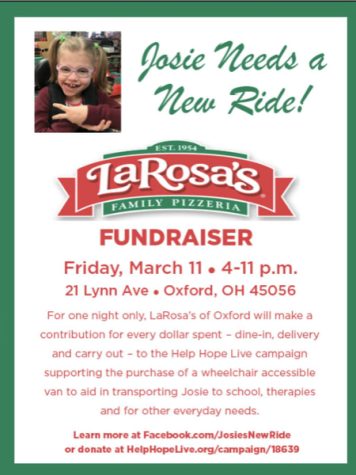 A group of the family’s Oxford friends are trying to help with that by holding a fundraiser. A group of eight church goers, in an effort unaffiliated with Oxford Methodist Church, are hosting a fundraiser from 4 p.m. to 11 p.m. today, March 11, at LaRosa’s Family Pizzeria, 21 Lynn Ave., Oxford to help the Henrys.

The Henrys are saving their money monthly, budgeting for a wheelchair adapted van. They have reached out to Help Hope Live, a medical fundraising site for bills and expenses through crowdfunding, to create an ongoing fundraiser campaign, with a goal of $60,000.

They have created a Facebook page, Josie’s New Ride, to share their progress and fundraising events with the community.

At today’s fundraiser, for every dollar spent, either from dine-in, delivery, or carry out, LaRosa’s will contribute to the Josie’s Help Hope Live campaign, the organizers said.

Jenny Presnell, humanities and social science librarian at Miami University, is one of the eight volunteers. She has known the Henrys since their move to Oxford.

“We just decided this was our mission to help in some way,” Presnell said. “It’s not that the church is not supportive, but because he is the minister, he can’t say this is my fundraiser, contribute.”
At first, they felt grief
When Caleb was offered the job of senior pastor at Oxford Methodist in 2019, the Henrys moved to Oxford from West Chester. Rachel Henry, a teacher at Highland Elementary School, stayed in her role during their move.

They have tried to get involved with the Oxford community; however, the COVID-19 pandemic has made it more complicated.

Their initial reactions to Josie’s prognosis were fear and coming to terms with it.

“I really felt like it was like going through the stages of grief, because it really was. There was this perception in my mind of what being a parent was going to be and who my child was going to be. When that was no longer, it felt like a loss. Initially, it felt like I had to go through all the processes of grief. I obviously asked myself why and what caused it,” Rachel said.

“We have ingrained in our society that every child that is going to be born will be normal, or at least that is what you want. Our world was enlarging, rather than getting reduced. We are trying to discover a new way of life,” Caleb said.

It took Rachel time, but she got to the point of acceptance and realized this was who Josie is and it was always meant to be, and nothing that the Henrys did, or didn’t do, caused it.

“Initially, it was full of a process of trying to come to terms with what [Josie being disabled] meant. And now it has moved to a point of being advocates for her as best as we can and trying to help others understand who she is and making the world more accepting and accessible at the same time,” Caleb said. “The problem for us was us, not her. It was us not being ready or understanding that having a disability doesn’t mean that you have a lesser life.”

Josie and her sister, Cora, get along well. They like to play together and be silly. Cora likes how Josie laughs at the funny noises she makes. She likes to dance with her sister.

Cora helps her mom with Josie as well. If people say mean things about Josie, Cora always sticks up for her sister and tells them what a great person she is.

The word pachygyria is formed from two Greek words: ‘pachy’ meaning thick and ‘gyria’ which means folds, so her brain is shaped so she has fewer folds than a typical brain that is thicker. This induces potential for seizures and causes developmental delays.
Becoming aware of accessibility issues
Before Josie was born, the Henrys were not aware of accessibility issues for disabled persons.

“I’ve learned that disability is not necessarily a bad thing or a charity. She’s only disabled because of the world being not accessible to her. Her brain is shaped differently, but that difference is so much more magnified because of the inaccessibility of the world.” Rachel said.

Josie has epilepsy. She is on the same anti-seizure medication she has been on since she was 4-months-old: Vigabatrin. It is in a powder form that the Henrys put into a drink Josie takes twice a day.

Josie eats mostly soft foods, and the harder foods are pureed. She eats basically every meal that the Henrys do; she is not a picky eater.

She is non-verbal but uses a communication device that is tracked through her eyes. Josie receives physical, occupational, and speech therapy. Before the pandemic, she did a lot of aqua therapy in the swimming pool and hippo therapy – therapy with horses.

Josie is non-ambulatory and spends a lot of time in a wheelchair.

“She has a nice set of wheels that it would be nice for her to be able to get into a van with,” Caleb said. “Which is where the fundraiser that we are doing comes from.”

As she gets older, Josie needs to get new wheelchairs that adapt to her body. Insurance can help pay for a new wheelchair. However, insurance will not help cover adaptive vans. Josie is currently in her second wheelchair, which the Henrys call “Josie’s Wheels.”

As written in her individualized education plan, Bogan Elementary must provide accessible transportation to and from school.

However, for the Henrys to go to therapy appointments, church, or anywhere as a family, they need a wheelchair lift for an adaptive van. Josie is still in a car seat and the Henrys must transfer her from the wheelchair to the car seat and vice versa.

“I can’t lift her chair out of the back of the van, (Caleb) still can,” Rachel said. “We do have a manually attached ramp that we leave in the back of the van. Even then it’s still heavy and a lot of work.”
Coping with the costs of care
A special anti-seizure medication Josie took for 30 days as a baby to initially stop the seizures , adrenocorticotropic hormone, cost more than $130,000, said her father. There are a lot of epilepsy foundations that helped the Henrys pay for the medication.

Her therapy outside of school is paid by the Henrys, which insurance helps cover. However, since January, the Henrys have had to pay a couple hundred dollars here and there for sessions because of issues with insurance.

The program links families of children with special health needs to a network of quality providers and helps families obtain payment for the services their children need, according to its website. The program is reserved for those at a lower income level, Caleb said.

When the Henrys both moved to full-time jobs for the first time, they moved out of the lower income bracket.

“It is a catch,” Caleb said. “Do you get better jobs for yourself or take care of somebody and get assistance? It’s a struggle we didn’t realize existed for a lot of people with disabilities.”

The Henrys want to buy a van and get it adapted to Josie’s needs.

Mobility Works, a nationwide agency that sells adaptive vans as well as adapting a van for a customer’s needs, is where the Henrys are planning on getting their van.

“We don’t have a specific van or [wheelchair adapted] lift yet. The process of this is that we are going to need a whole new van. Our current van cannot be modified, [as] only certain types can be modified,” Rachel said.

The upkeep of the adaptive vans is expensive because of all the parts you have to maintain, Caleb said.

“The church members have done a wonderful job of really connecting us with resources, research into fundraisers, grants to help with it. The paperwork and all of the stuff is a lot of work,” Caleb said. “People in the community have done a lot to raise awareness and spreading the word or contributing. It is very much appreciated.”

The volunteers have been working on the fundraiser for approximately three months.

“LaRosa’s has always been a really big community supporter, and (Oxford franchise owner) Joel Engelhard has always been really good at also supporting all kinds of local projects,” said Presnell.

He asked LaRosa’s if this fundraiser was something that they were willing to do and they were open to it, Presnell said.

“They (the Henry’s) have a significant amount of money to raise. All kinds of people can contribute,” Presnell said.