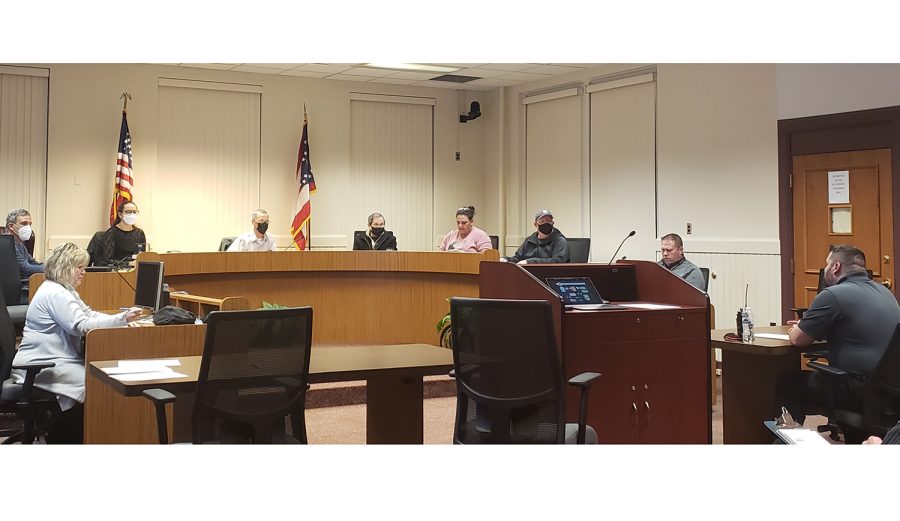 Oxford’s police officers serving in the Talawanda schools described their jobs as part counseling, part teaching and part mentoring, during a meeting of the city’s Police Community Relations and Review Commission at the city courthouse Thursday, March 10.

Oxford police provide school resource officers (SRO) to Talawanda High School, Talawanda Middle School and Kramer Elementary School, which all are within the city. SROs in the district’s schools outside of the city come from the Butler County Sheriff’s Department.

“If we didn’t have resource officers in schools, the response time would be much longer,” said Wagers. He said with an officer always in the school during school hours, the police are already on the scene if a dangerous or threatening situation were to occur.

SROs serve as a liaison between the police department, the school district and other groups, such as city council. The officers are trained to not only deal with in-school situations, such as fights, drug violations, and lockdowns, but also help deal with after-school situations that may occur on the schools’ campuses.

According to Wagers, the SRO program was established in 2011. He said he was assigned to the program when he joined the department as a part-time officer, before becoming full-time a few years later. Officer Richard Butler now serves as SRO at the high school and Officer Jacob Hayes is SRO at Kramer. All of the positions are full-time.

All three officers shared personal anecdotes about experiences with students both before and after school and the relationships they formed to better serve students. Hayes said he assists in an elementary school program known as “The Breakfast Club,” in which first grade teachers and other staff walk to the low-income housing near the elementary school, walk students safely to class, and provide them breakfast and activities on weekday mornings.

Butler recalled several instances when students came to him seeking either help or to report an incident of threats. Sometimes, they just came in to ask for something from the snack drawer he keeps stocked for such occasions. That helped lead to social workers at the high school creating a program for boxes of food to be available for students in discreet locations, he said.

Butler made it clear education is a priority of the resource officer program. He said he served as a guest speaker for health, history and social studies classes, giving talks on drugs, First Amendment (free speech) and Fourth Amendment (freedom from unreasonable search and seizure) rights. He said his lectures also covered how police operate and active threat safety.

The focus of the officers, Wagers said, was to educate rather than enforce.

“While an SRO can’t stop and prevent everything, we do serve as a deterrent,” he said.

Patrick Meade, president of the Talawanda Board of Education and a member of the police commission, mentioned that the district had a concern when the SRO program was started that officers would end up disciplining students. According to Butler, the officers only get involved in “discipline” when severe drug violations occur. While drug violations are the most common types of misbehavior the officers deal with, the school district handles disciplining students for minor violations. Most of the time, Butler said, the students are found with vapes or THC pens.

Hayes brought to attention an important program within schools called the Handle With Care program. If a student is known to have been involved in some sort of event involving police, such as arrest of parents, a house fire, or a shooting, the teachers will be notified via an email only listing the student’s name and the phrase “Handle with Care.” The priority of the program is to inform teachers to give struggling students the space and care they need to recover from potentially traumatic events.

The next commission meeting is scheduled for May 12.