Citizens Petition to Protect Another Neighborhood from Rental Housing Creep 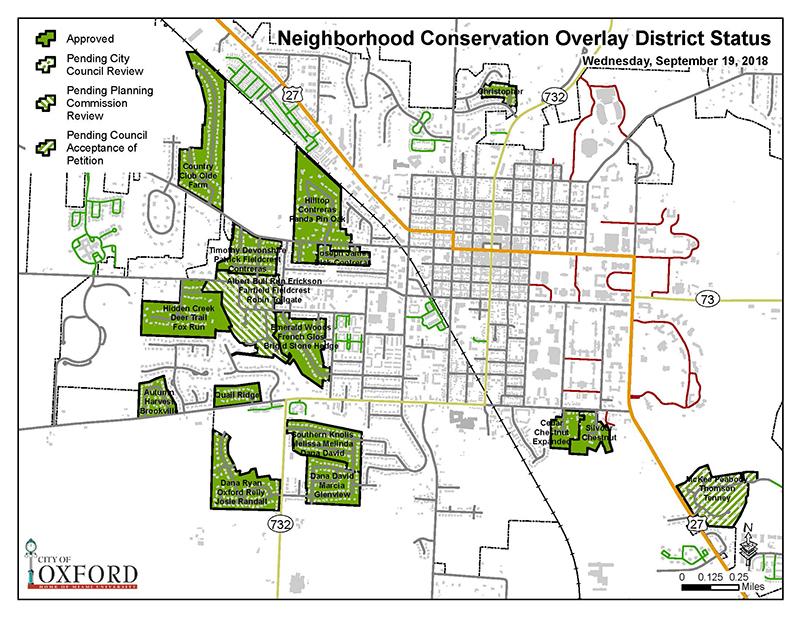 The areas shaded in green represent the existing overlay districts in Oxford. The green striped area along Route 27 in the lower right corner of the map is the Juniper Hill subdivision, now being considered for an overlay designation.

Oxford took the first step toward ensuring another residential neighborhood isn’t taken over by student rental housing when it accepted a petition this month from homeowners in the Juniper Hill subdivision.

The petition requests that the neighborhood, just off Route 27 south of campus, be designated as Oxford’s 17th neighborhood conservation overlay district. Such districts restrict homeowners from renting their properties to more than two unrelated people.

Oxford City Council accepted the petition at its Oct. 2 meeting and forwarded it to the city planning commission for review. Following that review the matter will come back to council for a final vote. The requested district includes McKee Avenue, Peabody Drive, and Tenney and Thomson courts.

Conservation overlay districts are “an excellent example of homeowners organizing themselves to shape their own residential community,” said Mayor Kate Rousmaniere. “The process starts with community interest, and community members drive the process. It’s democracy in its truest form.”

To qualify as such a district, a neighborhood must have 10 adjacent lots, and two-thirds of the homeowners must sign a petition, said Sam Perry, the city’s community development department director.

The possibility of having 17 such protected neighborhoods in the city should be welcome news to year-round Oxford residents, officials said.

“The popularity of such districts, typically in the Mile Square, is testimony to the desire of citizens to achieve privacy, to minimize noise and congestion and prevent excessive traffic and parking problems,” Vice-Mayor Steve Dana said.

Some families have been tied to the Juniper Hill neighborhood for decades, and preserving the community’s family-like atmosphere was a top priority, said resident Anita Jones. Her house has been owned by members of her husband Russ’s family for upwards of 40 years. He purchased the home from his parents so he and Anita could create their own memories.

“I’ve seen other neighborhoods take this step to protect their neighborhoods from becoming mostly student rental, so that there are still neighborhoods where children can ride their bicycles around and not have loads of traffic coming in-and-out of it,” she said.

Jones, an author, introduced the petition. Three other families assisted them in gathering signatures. The community is home to one student rental, but that’s not to say that the Joneses dislike Miami students.

“We love the guys that live there. They’re great. We’ve had them over for dinner,” she said. “We’re not opposed to students, at all. We don’t want to give off that impression.”

“We walked around and delivered a packet,” she explained. “For those that weren’t home, we mailed it. Sam Perry’s office, they provided the guidelines to expedite the process.”

This overlay district is the second such to be assigned in southeast Oxford. The first is located on or adjacent to Chestnut Street near Silvoor Biological Sanctuary.

The majority of the overlay sectors can be found in the city’s western quadrant, far from the predominantly student-occupied High and Spring streets. The first overlay district was approved four years ago.

The program’s usage has experienced peaks, but “…now it has tapered off some, as much of the owner-occupied residential area of Oxford has been converted to these” districts, Perry said.

The ordinance language says such districts can maintain an attractive community appearance and a desirable living environment by preserving the owner-occupied character of a neighborhood.