Kumler Memorial Chapel: A legacy of Western College for Women 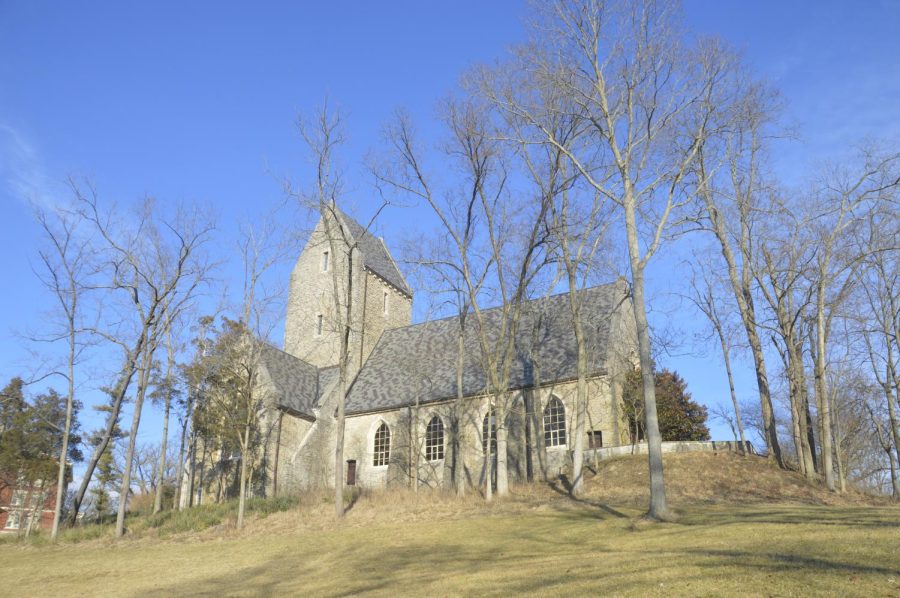 Kumler chapel was built on a grassy slope, close to a stone bridge and a quiet pond. Historic Peabody Hall is located to the east of the main drive.

Editor’s note: This is the first in a series of photo essays about interesting and historic buildings around Oxford and on the Miami campus.

Kumler Memorial Chapel was once part of Western College for Women, a women’s college in Oxford from 1855 to 1974, now known as Miami University’s Western Campus. The Chapel was a gift of two sisters, Anna Kumler Wight and Ella Kumler McKelvy, both alumni of Western College, in memory of their parents and grandfather.

Architect Thomas Hastings built the chapel in a transitional Gothic style, with both Gothic and Romanesque influences. According to the Ohio Historic Inventory, the chapel is a copy of Église Saint-Pierre, a church in Bazoches-au-Houlme, Normandy.

The cost of Kumler Chapel was never revealed, but was divided between the Kumler sisters and the architect.

Kumler was dedicated in 1918 and is built of native fieldstone. The chapel consists of a long gabled sanctuary with entrance porch at its south end and circular apse with conical roof at its north end.

The five stained-glass windows were designed especially for the college. Three of them depict Biblical symbols and two depict symbols of the arts and sciences.

The warm wood interior and stunning arches create a solemn and peaceful atmosphere. According to Miami University, the chapel seats 235 people. It is now mostly a venue for special church services, events, concerts and weddings.

On the hillside to its south is the Freedom Summer ‘64 memorial amphitheater, which honors three civil rights workers — James Chaney, 21; Andrew Goodman, 20; and Michael Schwerner, 24 — who were murdered in Mississippi while registering black voters.