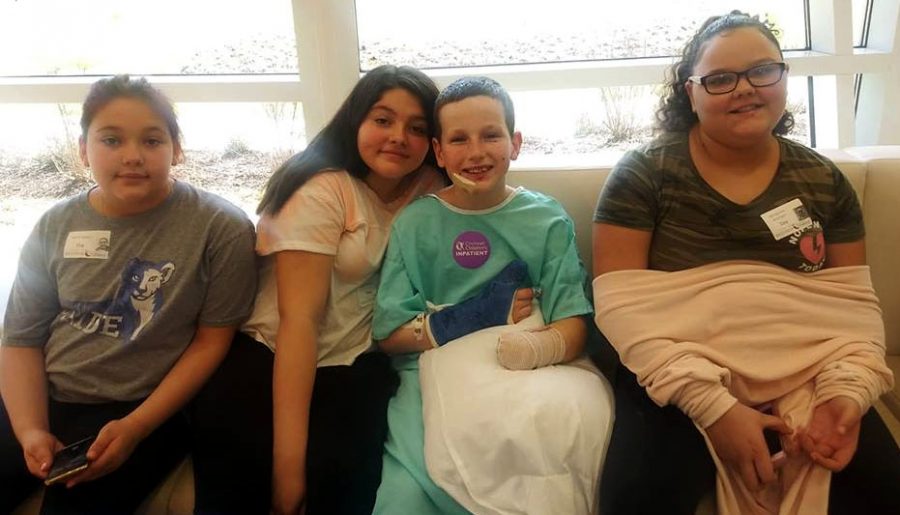 Caleb Bogan with members of his family, (left to right) sister Kaylin Bogan, cousin Ciarra, Caleb, and his cousin Adreyonna, shortly before going home from the hospital. Photo provided by the family

Caleb Bogan, the 12-year-old Talawanda Middle School student who lost his left hand and severely injured his right hand in a March 19 explosion, was discharged from Cincinnati Children’s Hospital Medical Center on Monday.

Debbie Anslinger is Bogan’s grandmother and guardian. Despite the homecoming, she made the trek to Lapels Dry Cleaning in Hamilton where she works, taking Bogan with her. Thursday was her first day back since Bogan was airlifted to the hospital.

“He’s fine being home, but he’s having his moments because he can’t go out and play like he used to with his friends,” Anslinger said. “He can’t use both hands, so he can’t take a shower on his own. I’m having to help him in the bathroom.”

In a short conversation before heading out the door for work, Anslinger said she is feeling overwhelmed.

“It’s a big change having a handicapped kid,” she said. “But we’re making it work.”

Bogan has 28 days left of his sixth-grade year, but he may not be returning to finish it with his classmates.

“As of right now, Caleb is not going back to school,” Anslinger said. “He doesn’t have either hand to work with so [the school is] talking about doing a couple of hours at a home school thing. If not, we’ll just wait until next year.”

During his recovery at Children’s, Bogan underwent five surgeries. His left hand was amputated, he has a cast on his right hand, pins in his thumb because he shattered his growth plate, and he has a skin graft, according to his aunt, Holly Knapp, who has been acting as a family spokesperson.

“He has a long road ahead of him and a lot more surgeries,” she said. “Caleb has a lot to learn and he has severe PTSD (Post Traumatic Stress Disorder).”

Anslinger described to the Observer how PTSD is impacting Bogan.

“He’s still feeling it explode on his belly and getting so hot that he wants to strip his clothes off and getting flashbacks.”

According to Oxford Police, Bogan and his friend, Brendon Jones, both of Oxford, were riding their bicycles in an alley behind 131 E. Withrow St., when they found an object with a fuse. Bogan, holding it in his hands, lit the fuse and it exploded, police said.

“He’s disliking himself for picking it up after so many times I’ve told him not to mess with something you don’t know because anything can happen,” Anslinger said. “Though I keep ensuring him that he’s a typical boy, that things happen and be glad that God left you your body and that you’re here now.”

Jones received minor injuries in the incident. He was treated and released from the hospital.

According to Bogan’s grandmother, he is interested in informing other children about his experience and reinforcing the idea to not pick up an object if you don’t know what it is.

The Butler County Bomb Squad described the explosive as a modified pyrotechnic device, about the size of a softball, wrapped in foil. Whether it was some sort of modified fireworks, or another type of device, and how exactly it came to be in the alley, remain under investigation.

“[The lab results] are going to be important because it’s going to give us some idea of chemically what it was,” and that could lead to where it came from, she said. “It takes a long time to recreate a scene that nobody can tell you much about.”

Bogan’s schoolmates at Talawanda Middle School have sent him decorative cards with optimistic messages to cover the walls of his hospital room. The Talawanda National Junior Honor Society created a one-day fundraising event to support Bogan during his recovery.

On March 27, students were invited to donate one dollar which allowed them to wear a hat all day during school. Students were also encouraged to wear blue that day, which is Bogan’s favorite color.

Knapp set up a fundraiser on her Facebook page and a special account at Fifth/Third Bank to receive donations for her nephew. The family is trying to raise $24,000 to get Caleb a prosthetic hand.

She said she has raised almost $4,500 for her nephew, using her Facebook fundraiser alone.

“We plan to raise enough money to get Caleb a custom-made bike and therapy toys,” Knapp said.

To donate via Fifth/Third, simply go to any branch of the bank and make a donation to the fund.