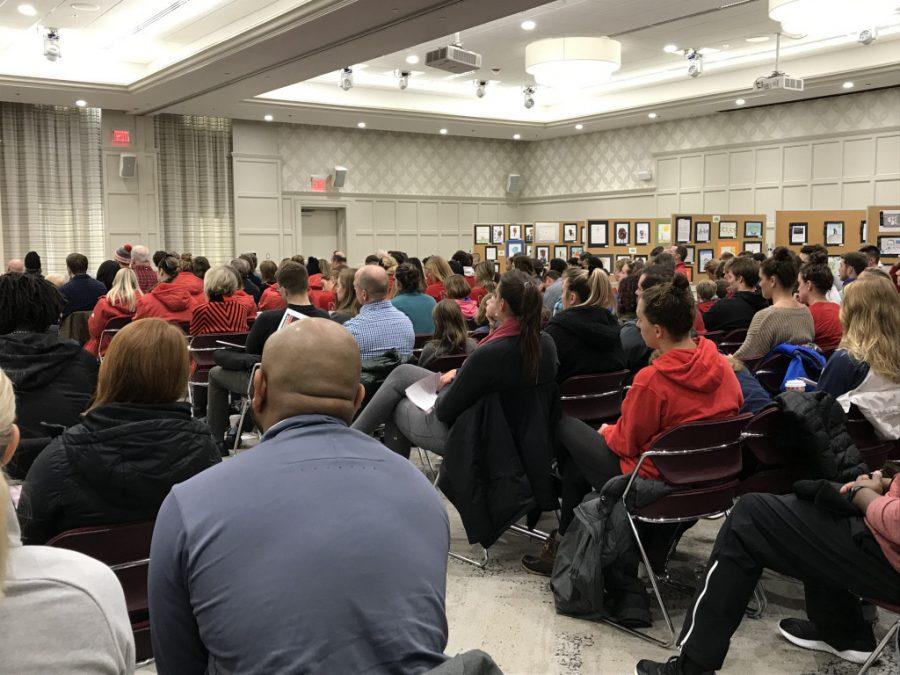 People from all over the community came out to listen to Moore’s speech and celebrate the life of Martin Luther King Jr. Photo by Patrick Keck.

More than 300 Oxford residents and Miami University students crowded into the Dolibois Room of Shriver Center on Monday to celebrate the life and spirit of Dr. Martin Luther King Jr.

King’s “I Have a Dream” speech, delivered on the steps of the Lincoln Memorial on Aug. 28, 1963, called for breaking down the barriers between people of all colors and creeds. Keeping that dream alive was the theme of the event on Monday.

In the proclamation, Rousmaniere expressed her desire for all people of Oxford to show “understanding toward their fellow man, promoting peace and helping freedom exist everywhere for all people.”

According to History.com, King was arrested 29 times in his pursuit of civil justice. It’s been more than 50 years since he was assassinated on April 4, 1968, in Memphis, Tenn. Speakers at Monday’s gathering wanted to be sure his words and actions were not lost on today’s citizens.

Gerald Yearwood, director of Miami’s Office of Diversity Affairs, began the event by reading a passage from “A Strange Freedom” by Howard Thurman, a prominent voice in the Civil Rights Movement. Reading from a piece in the book titled “Keep Alive the Dream in Heart,” Yearwood said to the audience, “Keep alive the dream, for as long as a man has a dream in heart, he cannot lose the significance of living.”

How Students Think of Him Today

The Oxford NAACP worked with the Talawanda School District to ensure King’s memory remained alive with a younger audience by accepting artwork in celebration of what would have been his 90th birthday. 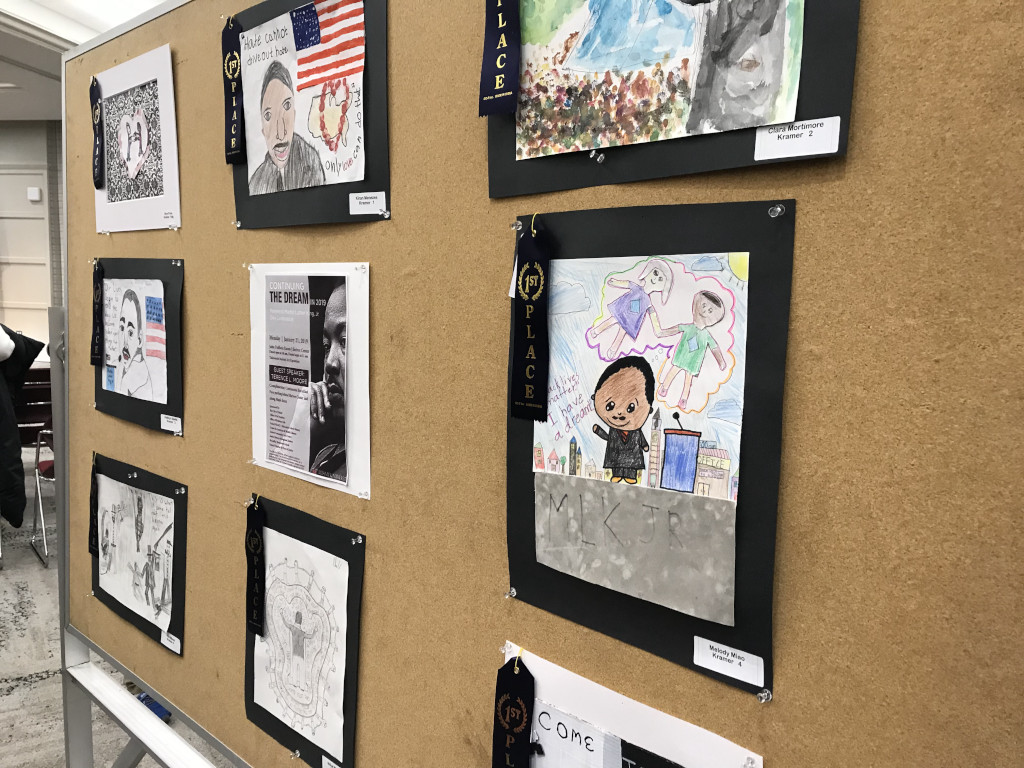 Students throughout the community contributed artwork showing their interpretations of King’s life and legacy. Photo by Patrick Keck

Fran Jackson and Ann Welger of the Oxford NAACP highlighted the artwork on display, which included 108 entries from students between kindergarten and 12th grade. Winners from each grade received gift cards from the NAACP.

Jackson, Oxford’s NAACP president, said the exposition was created to honor the man who she called “the world’s best champion of humanity.”

The display represented King’s wish to bring people of all colors together. Many of the students’ paintings and drawings showed hands interlocked or some of his famous quotes.

Following the event, the student’s artwork was put on display in the Oxford Community Arts Center for the rest of the week. 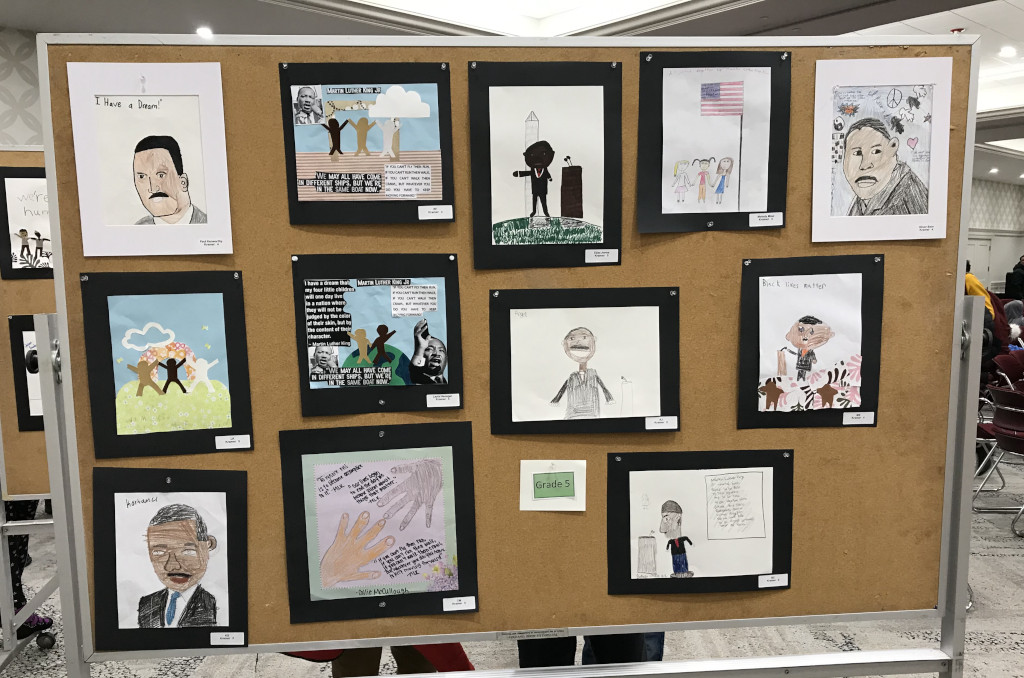 Students from Kramer Elementary School contributed artwork to the event on Monday. Photo by Patrick Keck.Recalling a Very Human Man

Terence Moore, a nationally-known sports journalist, part time instructor of journalism at Miami and 1978 Miami graduate, was the event’s keynote speaker. Moore, who once served as a deacon at Atlanta’s Ebenezer Baptist Church, where King was co-pastor between 1960 and 1968, said he learned of the lesser-known, human qualities of King from family and friends who knew him.

He said those who knew King personally described him as fun-loving, in contrast to his serious public demeanor. They told of a fondness for pillow fights and an unstoppable fade-away jump shot.

One story that Moore shared came from Rev. John Edwards, King’s Sunday school teacher when he was 11.

Moore said Rev. Edwards described King as a difficult student who could not accept anything at face value. King most questioned the idea of the virgin birth of Jesus.

One day, said Moore, Rev. Edwards pulled King from class and told him about the importance of faith when you are uncertain about something.

Moore said this moment shaped King to become a man of great faith, an idea that he wanted the audience to go home with. He argued that having faith, not necessarily in religion, but perhaps in your family, country, or even yourself, will make positive change possible.

Taking Responsibility for the Dream

Ronald Scott, vice president of Institutional Diversity and Inclusion at Miami, concluded the event by stressing the dream King fought for in his life and said we are responsible to continue the pursuit.

“It’s our responsibility to solve problems,” said Scott. “We need to talk to each other, act as a team to make the dream a reality.”

The event concluded following the singing of “We Shall Overcome,” when audience members locked hands in solidarity. For a moment, it seemed the crowd was unified, just as King would have wanted.