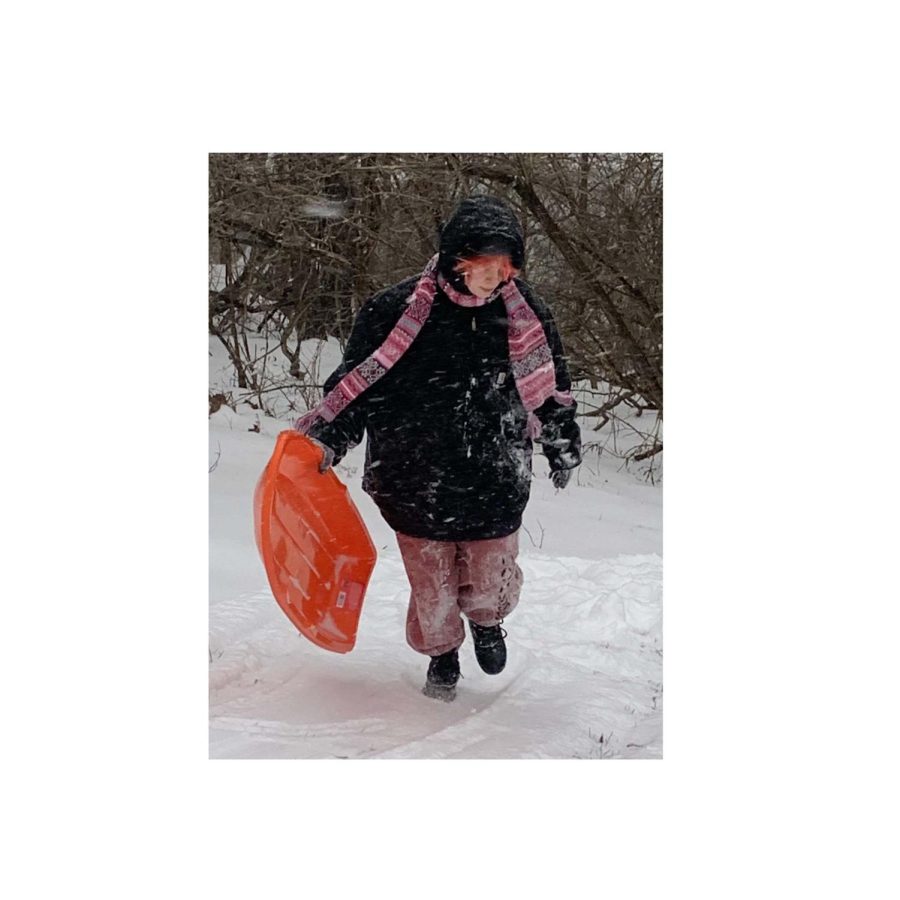 Miami student Gina Roth trudges back up the hill behind Peabody Hall after a sled ride Thursday afternoon. Photo provided by Gina Roth

By Caroline Haubenstricker and Kenn Jones

Although light snow was continuing in parts of southwest Ohio Friday, the massive storm that iced the roads, closed the schools and brought on power outages had abated by 10 a.m., according to the National Weather Service.  Driving was still hazardous, and the temperature was a frigid 18 degrees.

The storm is spread from Colorado and New Mexico all the way to Maine. Locations impacted by snow and ice are expected to have temperatures remain below freezing and well below average for at least the next couple of days, the weather service reports.

Power outages in Oxford began at 5:48 a.m. Thursday due to damage to overhead wires and generators, reported the Oxford Police Department. While the cause is still under investigation, Duke Energy expected to have power restored to all locations in the Oxford area by 6 p.m. Thursday, according to the company’s website. No more outages were reported as of Friday morning and power had been restored to most areas in Oxford, according to police.

The City of Oxford is under a Level I snow emergency, declared by the Butler County Sheriff’s office. That was raised to a Level II on Thursday evening, meaning residents were urged to remove vehicles from designated snow routes and to stay home and avoid driving if at all possible. As the snow continued to fall Friday, Oxford police extended the snow emergency until 3 p.m. Friday.

According to Assistant City Manager Jessica Greene, preparations for the winter storm began Wednesday, with Oxford’s eight salt trucks being sent out to prep the streets. Plow trucks were  sent out after snow accumulation slackened.

As a member of the Butler County Emergency Management Agency, the city has set forth plans in case any residents lose heat during the storm. The plan includes using Talawanda High School and Kramer, Bogan and Marshall Elementary Schools as possible shelters.

“The City of Oxford’s largest partner in this plan for shelter is the Talawanda School District,” Greene said, “Their school facilities are equipped with generators and can be used in the case of an emergency.” Talawanda Middle School is not a designated shelter, as it does not have a generator, she said.

How the storm developed

There are three elements necessary to create a winter storm, including cold air, lift and moisture, according to the National Oceanic and Atmospheric Administration (NOAA) National Severe Storms Laboratory.

Winter storms are created from the clash of two air masses of different temperatures and moistures at a front. When an air mass of cold and dry air clashes with warm moist air pushing it away, it creates a cold front and causes a winter storm.

The winter storm warning indicated that the counties of Butler, Clinton, Fairfield, Fayette, Hamilton, Pickaway and Warren will experience snow and sleet accumulations of 1 to 3 inches, ice accumulation of two tenths to one quarter of an inch and wind gusts as high as 35 mph. The warning also indicated that power outages and tree damages are likely, snow could reduce visibility, and hazardous conditions could impact morning and evening commutes.

What’s in a name?

Naming storms – specifically tropical storms, cyclones and hurricanes – is officially up to the NOAA and the National Weather Service, which are government agencies. Those groups don’t apply names to winter storms.

However, that does not stop private organizations, such as The Weather Channel, from trying to put their brands on the weather – which is what happened with this storm – now unofficially known as “Landon.”

The cable channel develops an alphabetical list of names every year to identify such storms, according to its website. The “official” government weather groups do not identify the storm by name in their reports.