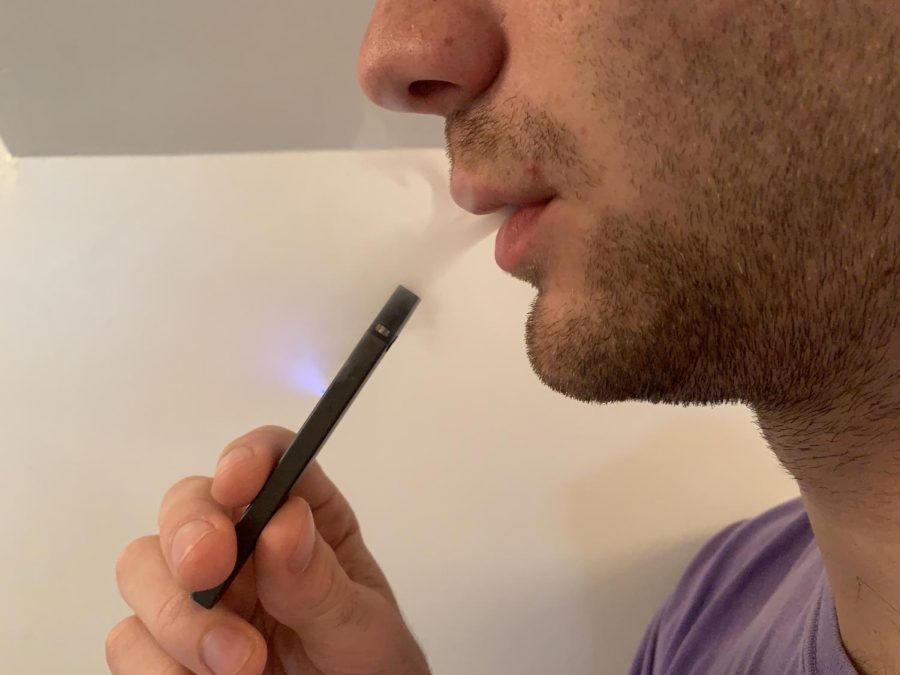 Vaping has become popular with young people, but also is causing illness. The first case of illness was reported in Butler County. Photo Illustration by Mallory Hackett

The first case of severe pulmonary illness related to e-cigarette products occurred in Butler County, according to a press release from the Butler County General Health District (BCGHD).

Officials from the BCGHD and the Ohio Department of Health (ODH) announced Tuesday this case is among 15 other illnesses related to vaping/e-cigarette use in Ohio and they are investigating 22 other possible cases in the state.

The individual’s name, location and condition are not being released by health officials to protect the patient’s privacy. The patient did not purchase the vaping product in Ohio, according to the health department.

“It doesn’t mean there is no risk here,” said Jennifer Bailer, BCGHD Health Commissioner. She, as well as the federal Centers for Disease Control and Prevention, recommend refraining from using e-cigarettes.

The United States has 450 confirmed cases of lung related illnesses connected to vaping across 33 states and one U.S. territory. So far, seven people have died in six states, according to the CDC.

The CDC has also confirmed gender and age data on about 70% of the cases. Nationally, almost three-fourths of the patients are male and roughly two thirds are between 18 and 34 years old.

The symptoms related to these illnesses include cough, shortness of breath and/or chest pain, nausea, vomiting and/or diarrhea, fatigue, fever and/or weight loss.

No specific vaping product are believed to cause the illnesses. Due to the lack of information surrounding the disease, when patients are suspected of having it, doctors must fill out a form from the CDC detailing the patient’s condition. It is then sent to the ODH and CDC to be compared to other cases across the nation to determine its cause, according to Bailer.

One indicator of this vaping-related illness is a “broken glass appearance” that shows up on chest X-rays, Bailer said.

E-cigarettes typically contain nicotine, tetrahydrocannabinol (THC) and cannabinoid (CBD) oils. In addition, e-cigarettes “can contain harmful and potentially harmful substances, including cancer-causing chemicals; heavy metals such as nickel, tin, and lead; volatile organic compounds which can adversely impact health; ultrafine particles that can reach deep into lungs; and flavorings, used to give a butter-like flavor linked to serious lung disease,” according to the BCGHD.

In Ohio, the counties with reported cases are Butler, Franklin, Hamilton, Jefferson, Lucas, Portage, Richland, Summit and Union, according to the ODH. Of those affected here, ages ranged from 16-26 years old.

“We are seeing tremendous increase in vaping among youth,” Bailer said in a statement. “This is a public health crisis.”

This issue has been on Talawanda School District’s radar for some time now, according to Amy Macechko, health coordinator for the district.

“We are aware and we deeply care that this is impacting people across the country and now close to home,” she said.

She has helped implement a variety of programs to curb e-cigarette use in the Talawanda schools. One program utilizes a Youth Action Team made up of middle school, high school and college-aged individuals who use interactive presentations to educate their peers. Last spring, the team spoke to a group of fifth graders about substance abuse to prepare them for experiences they might encounter in middle school and beyond.

Macechko is also tasked with keeping parents informed on the latest information from the CDC and the surgeon general. She wants them to be aware of what to look for in their children, but most importantly, to have the tools to talk to them.

“We want our parents talking early and often about this topic and any topic related to substance abuse,” Macechko said.

Every other year, Talawanda students take a substance use survey as a way for school officials to gather data on drug use and perception. The district will survey the students this November and the results will help guide the work for Macechko and her team.

“It’s critical to continue to educate and provide resources to our community, to our families and to our students,” she said.