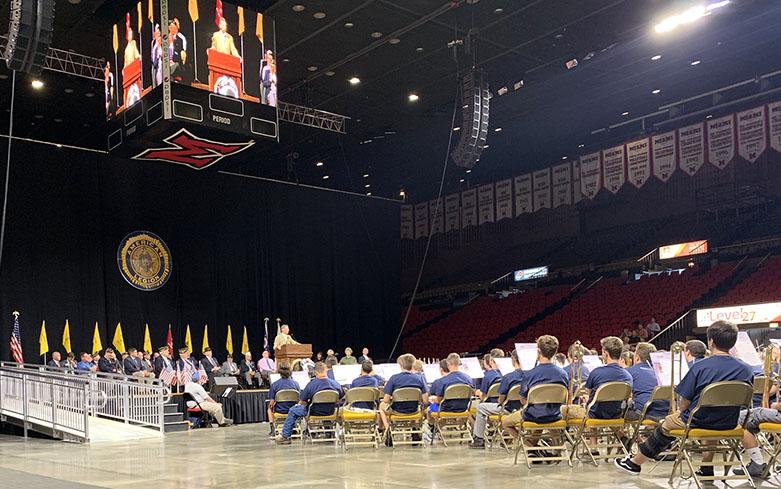 National Football League Hall of Fame player and coach, Dick LeBeau, told 1,000 enthusiastic Buckeye Boys State attendees on Monday that what they learn in Oxford this week will stay with them for the rest of their lives.

Buckeye Boys State (BBS) is a weeklong American Legion program being held at Miami from June 9 through June 16, which seeks to educate male high school juniors about local and state government with interactive programs in which participants take on the roles of elected officials. It is described by the organizers as “a week to shape a lifetime.”

LeBeau, who attended Buckeye Boys State in 1954 as a high school student from London, Ohio, echoed that sentiment.

He backed up with anecdotes of NFL stars Troy Polamalu, James Harrison, and James Farrior —three players he worked with during his coaching career.

“They refused to ever say, ‘the game’s over.’ They never gave up,” LeBeau said. “Don’t you ever give up. Don’t ever listen to the naysayers. Don’t pay attention to statistics that, ‘oh, he can’t do this.'”

After high school, LeBeau attended The Ohio State University, where he was a member of the 1957 national championship team. LeBeau was picked as a safety, 58th overall in the 1959 NFL Draft by the Cleveland Browns, but was cut before the season. The Detroit Lions picked him up and he blossomed into a Hall of Famer over his 13-year playing career.

LeBeau spent 45 years coaching, with the Cincinnati Bengals, Pittsburgh Steelers, Tennessee Titans, Buffalo Bills and Philadelphia Eagles. He was the Bengals head coach from 2000 to 2002. As part of the Monday program, he was inducted into the BBS Hall of Fame.

Teaching How Government is Supposed to Work

Boys State’s goal is to teach the students how government is supposed to work, said Bill Strong, public relations representative for BBS. “We have cities, counties, and state… we have all the offices within,” during the weeklong mock-government program.

During the week, Boys State holds mock elections in which the attendees vote for mock city, county, and state government positions. For example, Javon Willis, an attendee, was elected vice president of his mock city’s school board. This week, he’s spending time learning the ins and outs of such a role would entail.

“[I’ve learned] how to keep within the budget, staying in between lines so we don’t go in debt, so the kids can get the best education they can,” Willis said.

Willis said what he’s learned may someday contribute to his dream of being a business owner. 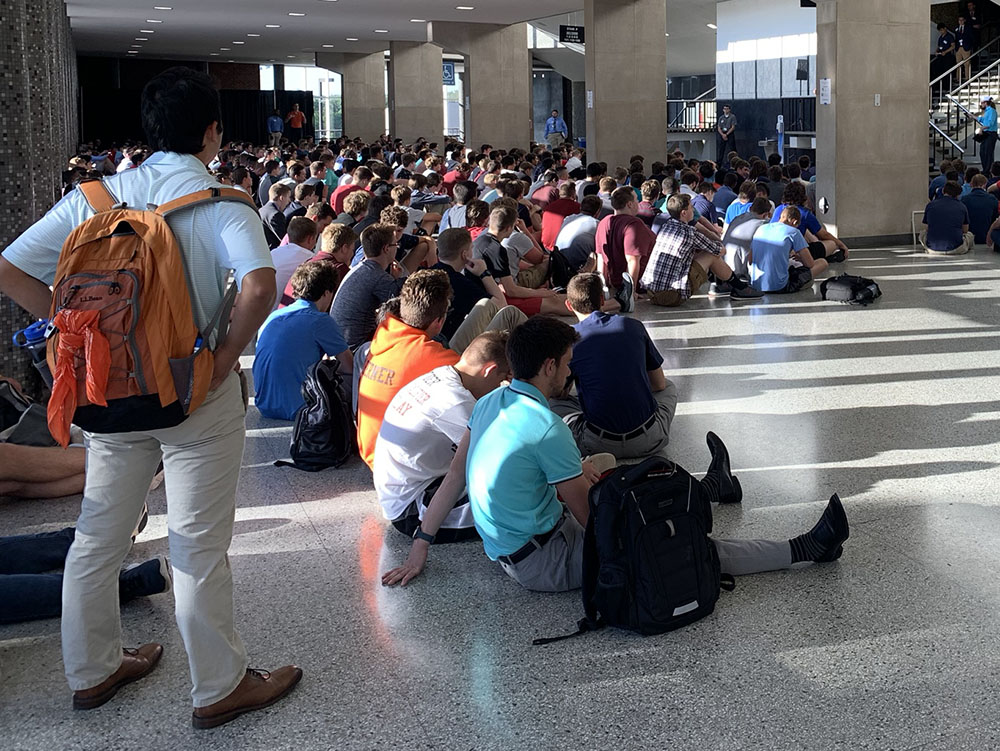 “This will help me stay in the budget, help me keep things in tip-top shape,” he said.

Other attendees are appointed to positions by the elected officials. Tyler Smith, another attendee, was appointed superintendent and treasurer of the same mock city by Willis. Smith is learning school budgeting skills, just like Willis, and he said he wants to use this week to learn about being a school administrator, which he is interested in doing someday.

Other positions that are elected at Boys State include Governor, nine state supreme court justices, and more.

Programs are Conducted Across the Country

Boys State has similar programs in every state except Hawaii, but Ohio’s is the largest. The American Legion runs Girls State weeks across the country as well. Buckeye Boys State began in 1936. In 2017, the program returned to Miami for the first time since 1946. In addition to the 1,000 attendees, a staff of around 120 former attendees– mostly counselors who graduated in recent years— is on hand to help facilitate the week.

The process for attending Boys State is selective, said Strong, who deals with his local high school’s selection process.

“I have a principal that really works with me. What he does is send an email out to all the teachers in the high school,” Strong said.

Teachers make recommendations for boys and girls they see as potential attendees, and Strong sends the list of girls along to Girls State officials.

Next is the interview process. Typically, Strong and two other Legion members will interview the boys.

This year, they interviewed 27 boys from his local high school, and initially chose 13 to attend, per their allotted slots. Eventually, three alternates they chose from the high school were chosen as well.

“I think it’s the greatest program that the American Legion puts on,” Strong said.

Strong said he is always running into former Boys State attendees. He said this is inevitable when you spend 30-plus years with a program that has 1,000-1,500 attendees each year.

“I had open heart surgery in 2008,” Strong said. “And I was at the VA hospital in Cleveland… I’m in ICU. A young man interning to be a heart surgeon walked up to me and said, ‘hello Mr. Strong.'”

An Experience that Stays with You

LeBeau echoed and expressed that this is a trend.

“You’ll be surprised as you go through your life, how many guys (from Boys State) you’ll have interactions with,” LeBeau said from the podium Monday.

At the beginning of his speech, LeBeau asked the audience to respond each time he said “hip, hip” with “hooray.”

LeBeau had the boys do it three times, and each time, and they got louder.

LeBeau then had the boys run it back and do it three more times.

As these things tend to go, the last “hooray” the boys sung out was by far the most palpable. Millett Hall was buzzing.

Dick LeBeau stood at the podium, facing the boys and their increasingly raucous emissions.