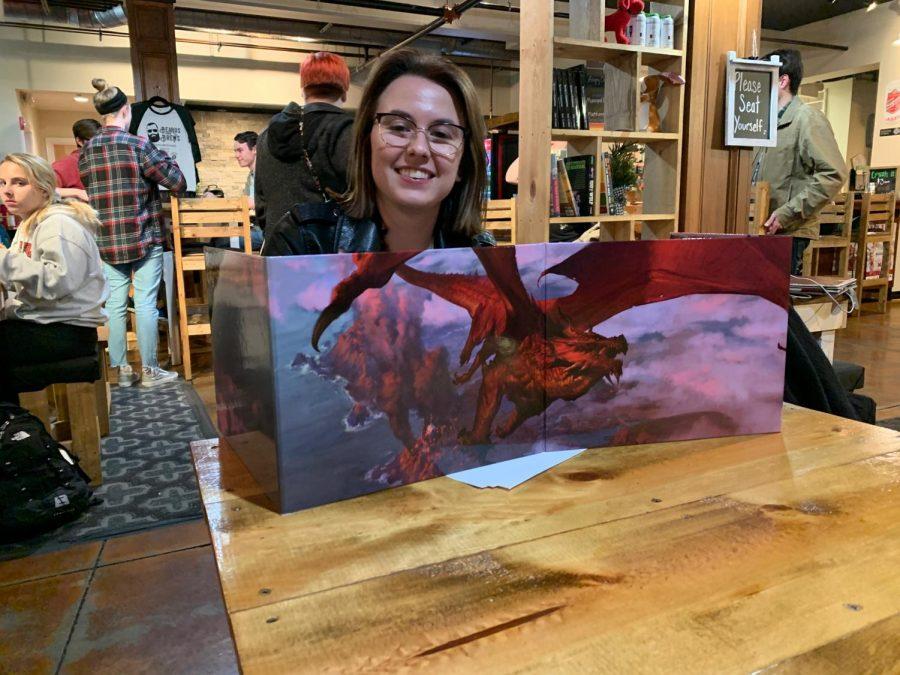 Rachel Brandenburg sets up to be a dungeon master in a game at Books & Brews on Tuesday. Photo by Abby Jeffrey.

Three tables of warlocks, spells, elves and dragons transformed Oxford’s Books & Brews into the world of Dungeons and Dragons this past Tuesday night.

The 7 p.m. to 9 p.m. event was staged by Miami’s Theater Department to promote the upcoming play, “She Kills Monsters,” written by Qui Nguyen.

The play centers around a girl, Agnes, who struggles to come to terms with the sudden loss of her family, especially her little sister, Tilly. She is brought into the fantasy world of Tilly’s imagination through the help of a dungeon master. Agnes learns about the person Tilly was and comes to terms with her grief in the Dungeons and Dragons community.

Dungeons and Dragons is a popular table-top role-playing game, created in 1974, that allows players to create their own characters in a fantasy, sword and sorcery world.

Leah Ball, one of the play’s two dramaturgs, or production editors, and one of the organizers of the event at Books & Brews, explained the importance of the D&D community to the play and why they hosted the Tuesday event.

“One of the play’s main characters finds her community, where she feels she can be herself through D&D,” said Ball. “These events exists primarily to engage the community of Miami and Oxford. One of the things we’ve been exploring is the relationships formed in D&D.”

Ball gestured to the surrounding tables in Books & Brews.

“A bunch of people that don’t know each other came and met up in a restaurant to play D&D and will probably leave as friends by the end of the night.”

Sitting at a table and watching the players act out characters and use their imagination makes it easy to understand why people gravitate to this community.

Books & Brews, owned and operated by Ann Kamphaus, opened in Oxford this past June. Kamphaus said her goal was to create a place where customers could disconnect from technology but connect to each other through books, board games and conversation.

The Oxford Books & Brews, operates as a franchise of an Indianapolis-based firm. It offers craft beers and food, while hosting weekly pub runs, trivia nights, Karaoke, poetry readings and specialty events such as Tuesday’s Dungeons and Dragons.

“Books & Brews is a place for the reader, for the scholar, for the gamer, for the drinker, for the music lover, for the individual,” according to its website.

For those unfamiliar with how D&D works, players use a previously made campaign, which provides the framework for the game. Players then play the game through their characters and dungeon masters guide players through the game.

Jon Hardy, who has played D&D since his freshman year, loves it because of its similarities to acting. 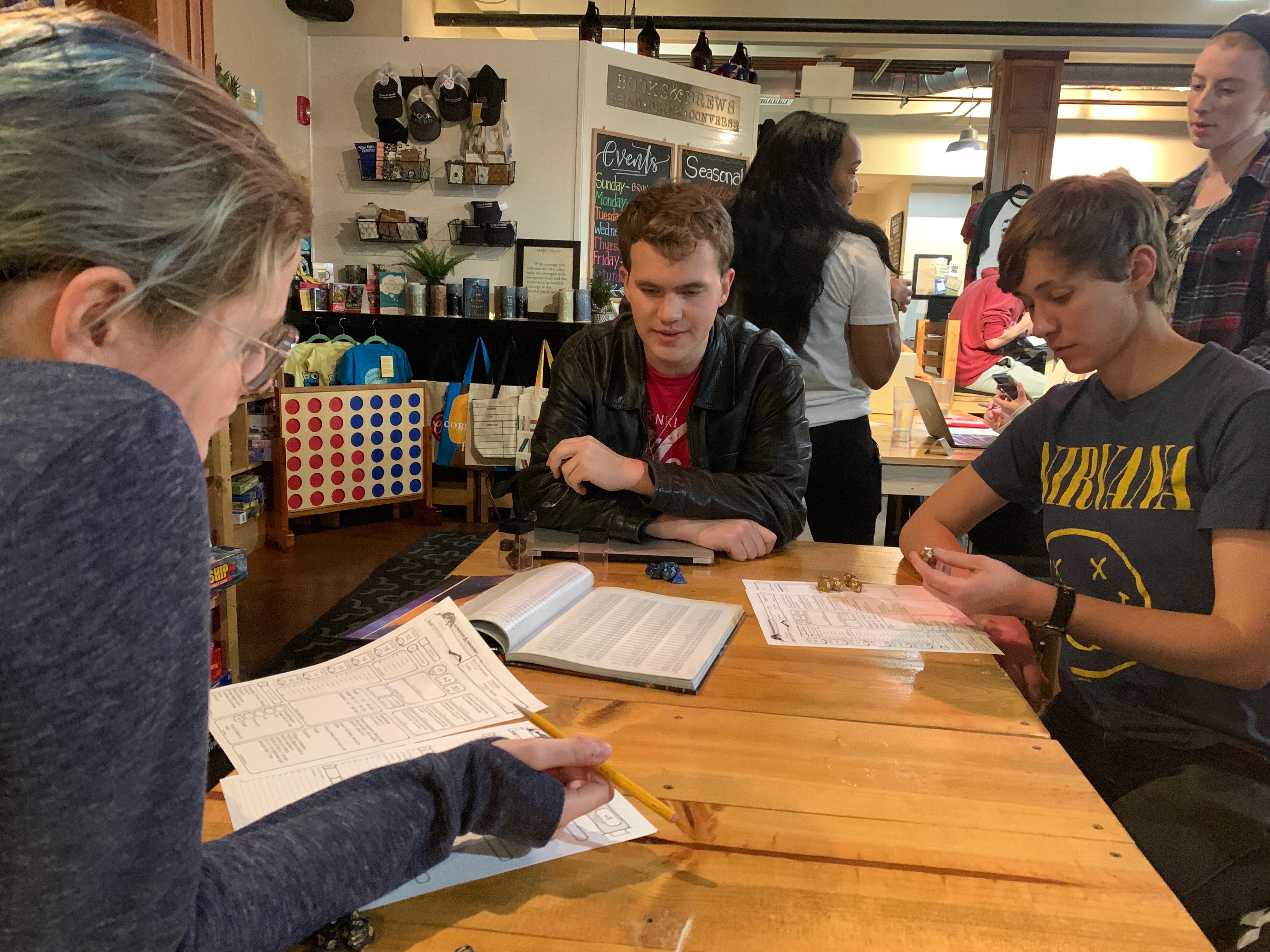 From left to right: Emma Miller, Jon Hardy, Maggie Mize start organizing their game before they played on Tuesday at Books & Brews. Photo by Abby Jeffrey.

“I have a very great passion for acting and storytelling and, specifically DMing (direct messaging through Twitter) which lets you fashion something into a story with a bunch of other friends and to let them in on that story,” said Hardy.

Even though Ball is new to the world of Dungeons and Dragons, she has learned a lot through her research as a dramaturg and echoes those feelings.

“It’s so fun because it’s just storytelling. It connects so much to theater. It’s basically adopting a character. You’re empathetically living the life of another person,” said Ball. “This event at Books and Brews was made possible by the help of John Loeffler who created the campaign and Jon Hardy who created the characters,” she said.

If interested in playing with this campaign there will be another Dungeons and Dragons event, promoting “She Kills Monsters,” from 8 p.m. to 10 p.m., Thursday, Nov. 14, in room 114 of the Center for The Performing Arts at 420 S. Patterson Ave.  Ticket information is available here. 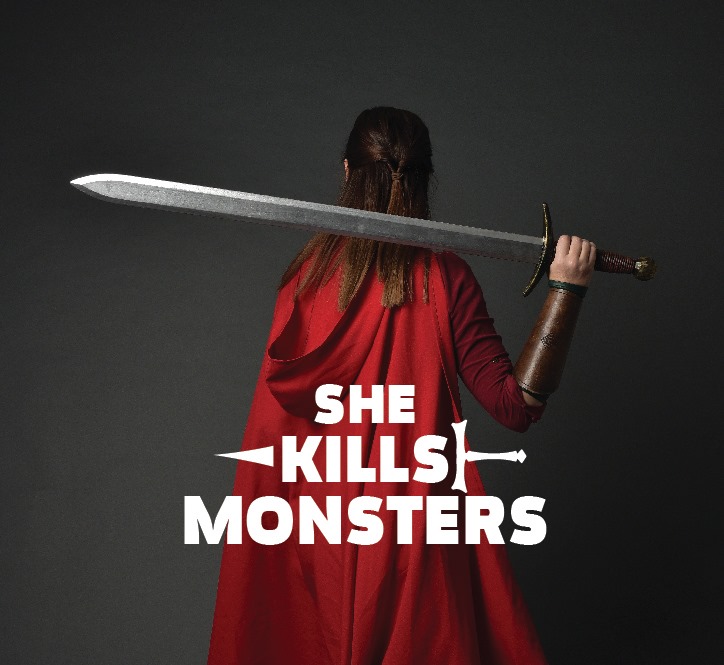 A poster advertising the play “She Kills Monsters.” Photo provided by Leah Ball.

Anyone who attends the Dungeons and Dragons event gets a buy-one-get-one ticket voucher for the production of “She Kills Monsters” which will be playing Nov.  20 – 24, at the Gates Abegglen Theatre in the Miami Center for The Performing Arts.