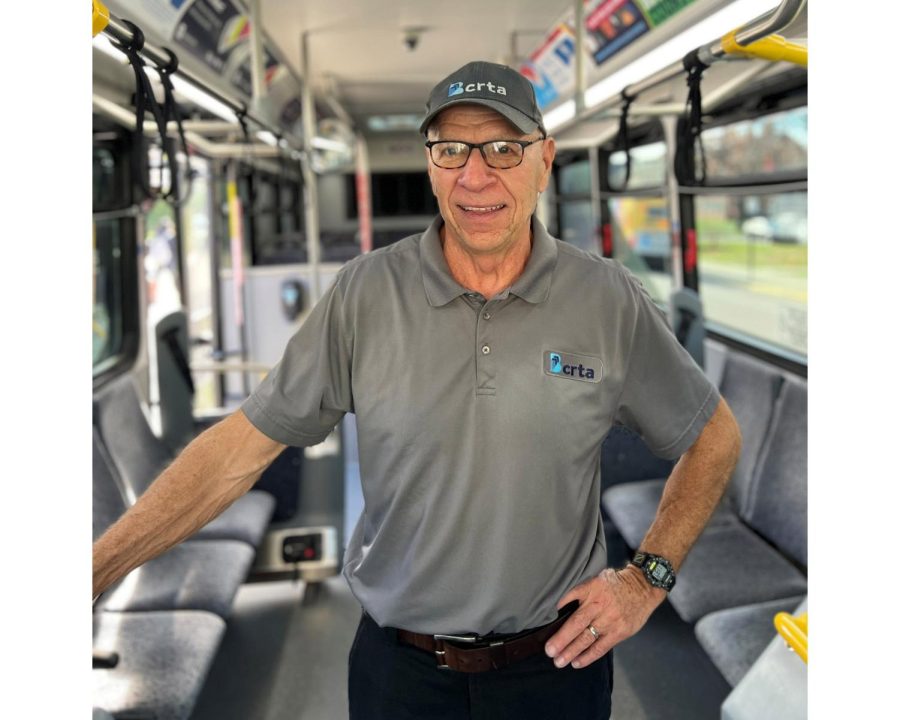 Tim Fritzsche has a smile for those who board his bus.

Tim Fritzsche has an impact on the lives of many people, even to those who don’t initially notice him.

Every morning, people in Oxford stand next to the bus sign, stretching their necks to search for their bus. They depend on it so that they can show up on time for their classes or their jobs.

Kayla Lynskey, a Miami University student who waits at the Chestnut Place Apartments, counts on Fritzsche to pick her up in the Park & Ride bus on a daily basis. “I take this bus almost every day,” she said. “I can recognize the driver because he has been driving this route for a while. I don’t know his name, though I say ‘Thank you’ to him every day.”

Every morning at 6:50 a.m., after a thorough inspection of the bus, Fritzsche is ready to start his first loop of the day. The Park & Ride bus departs from Chestnut Fields Park & Ride at 7 a.m.

After a short stop at Miami Station D in front of Shriver Center, the bus goes to the Ditmer Park & Ride. Its next stop is at Farmer School of Business. It passes by locations such as Miami Station A, McGuffey Hall, South Campus Garage and finally back to Chestnut Fields. After a short five minute break, the next loop of the route begins.

“I don’t get bored,” Fritzsche said. “I meet with different people. I take a five minute break every 30 minutes, for every loop I make. Sometimes, I can have a conversation with someone. These are my relievers from paying extra caution when on the roads.”

Working as a bus driver brings Fritzsche into contact with many interesting people. He said he thinks it is a meaningful job to drive college students around and knows what students’ lives are like.

“Eight hours of driving for every day in 20 years is very hard,” he said. “But, I would love to drive instead of (my old) job back in the ‘meat grinder’.”

After Fritzsche graduated from Miami with a business management degree, he worked for the First Financial Bank in Oxford until he turned 50.

After 27 years at the bank, his personal financial position was established. With the ever-increasing demands and expectations placed on him in his banking career, Fritzsche said he decided to retire early from his position as vice president. It is a decision he said he has never regretted.

“Even now, I still sometimes dream of particular customers and particular issues (at the bank).” he said. “So, I retired from the bank and became a bus driver in January 2001.”

“He is always busy. I can’t imagine him staying home and doing nothing. He does all the dishes at home (without anyone telling him),” said Lena Fritzsche, who has been Tim’s wife since he was a sophomore at Miami. Lena, now retired, worked as an elementary school teacher for Talawanda School District.

Tim and Lena were both born in Oxford. They met when they were students at Talawanda High School, where both of them participated in the marching band.

The Fritzsches have a total of 11 grandchildren. Every summer, the family participates in camping and boating in a national park.

“We like children. We both enjoy spending time with younger people. We appreciate that because of the jobs we do, we can have summer break with children.” Lena said, “Going through every year of summer activities, it is happiness to see every little difference between them.”

Fritzsche drives his bus through the seasons but has to ignore the scenery of Miami’s campus while he’s working. Instead, his attention is focused on pedestrians who are looking at their phones; skateboards and scooters that are out of control; dogs and squirrels that are about to cross the road.

“I understand the responsibility that I’m holding when I am driving the bus. That’s why I need to be extra cautious on the road,” he said. “I have to be alert in order to prevent an accident. I have to be prepared.”

Murph Byrne, Tim’s brother-in-law, sees Tim as a mentor. They have known each other since they were in grade school.

“When I have questions that I cannot make decisions on my own, I ask for his advice first, especially on financial advice,” Byrne said. “Tim, he just gotta be doing something. They (the bus company) are lucky that they have Tim. He follows all the guidelines and checks the bus in great detail. His work ethics are a part of his spirit.”

Fritzsche said that he will continue driving as long as his health allows. It is his way to serve the community and pass on kindness to others.

“I am not worrying about his health, neither physical nor mental,” Byrne said, “I mean, I do care about his health, but do not worry about it. We used to be cutting down trees together before the pandemic. And I know he is a good water skier. I can’t think of anything that can stop him from driving.”

Speaking of changes, Fritzsche seems to know everything about the campus he circles all day. There was once a bowling alley in the basement of Shriver Center, and the Ditmer Park & Ride was once a soccer field. The Farmer School of Business did not exist until decades after he graduated and he recognizes that McGuffey Hall has never changed its floor since he took classes there.

However, the most dramatic change occurred last year.

“Last year, when the school was closed, although many bus lines were shut down, I was still driving the PR line. For many, many hours, there were zero passengers on the bus. Believe me, it was awful. I am really glad that students are back to school.” he said, “Students used to board the bus in the front door and swipe their IDs right here. I was able to smile at everyone and say ‘Hi’ to everyone.”

There was nothing more difficult for Fritzsche than driving an endless loop for eight hours by himself. With this in mind, he advised not to ignore the people you pass by every day.