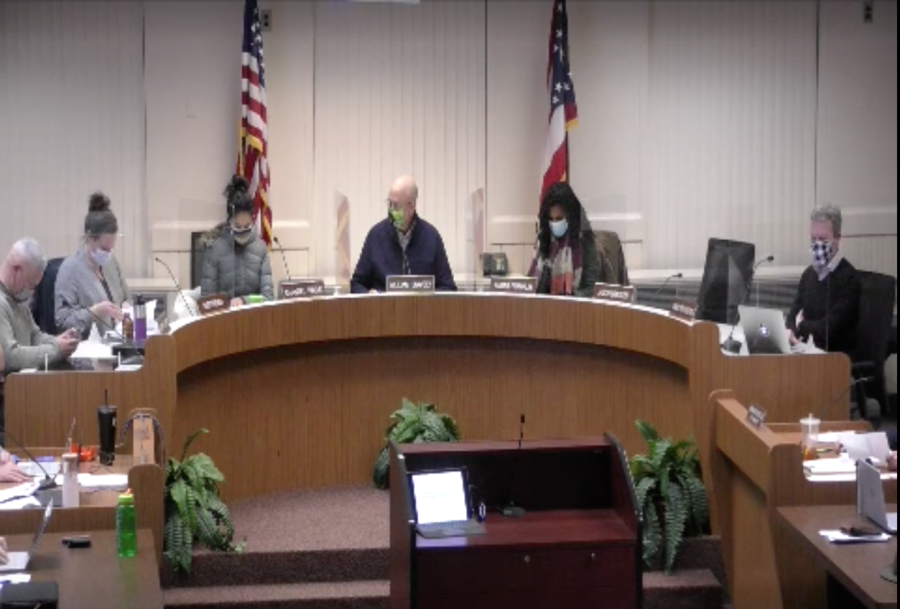 Photo taken from the livestream video of the meeting

Oxford City Council decided to postpone a vote on a possible mask mandate during its Jan. 4 meeting. Although not required to, most people at the meeting, including council, wore masks.

Oxford City Council pushed the discussion of an emergency indoor mask mandate to the next council meeting, Jan. 18, after failing to move the issue to a vote this past Tuesday.

Council accepted a report on a proposed ordinance from City Manager Doug Elliott and heard a report from McCullough-Hyde Hospital President Michael Everett that the rate of positive COVID-19 tests at the hospital this week is the highest it has ever been.

The proposed ordinance in Elliott’s report noted that the federal Centers for Disease Control (CDC) recommends wearing masks. The report also noted that Miami University, where its spring semester begins Jan. 24, requires masks to be worn inside all university buildings.

As written, the proposed ordinance would have required masks to be worn by anyone over the age of 2 inside any store, business or other indoor place of public access. Exceptions were made for anyone eating or drinking, anyone with a medical condition precluding mask wearing, places of worship and police and firefighters in the course of performing their duties.

To be passed as an emergency measure — which would have gone into immediate effect — the ordinance would have needed six votes from the seven member council. However, Councilor Jason Bracken was absent from Tuesday’s meeting. As such, every other member of the council would have had to vote in favor of the discussion. Councilor Glenn Ellerbe indicated he would be opposed to such a mandate, emphasizing the importance of letting people make the decision to wear a mask themselves.

“It is not my job to legislate behavior of the constituents in this town,” Ellerbe repeated several times during the meeting. In Ellerbe’s opinion, the best course of action would be a resolution that encourages people to get fully vaccinated and to wear a mask when possible.

“I would much rather ask people to do something because I trust that the citizens of this town are good people,” Ellerbe said.

If adopted, this proposal would have been the city’s third mask mandate. Council voted 6-1 to pass a mandate last Aug. 10 (with Ellerbe opposed) at about the same time Miami announced its mask requirement. That ordinance expired Dec. 13, after the end of the fall semester. A previous mask ordinance was in effect from July 14, 2020 through June 2, 2021. Council repealed that measure when Ohio Gov. Mike DeWine lifted state COVID-19 mandates.

Ellerbe also questioned how well a mask mandate could be enforced. Oxford Police Chief John Jones said that during last fall’s mask mandate, local police issued only five citations – four to individuals and one to a business. During the first mandate, no citations were issued, Jones said.

Although the city has no current mask rules, private businesses are allowed to require them. Miami University still has its own mask mandate in place, and Talawanda lifted its mandate this week.