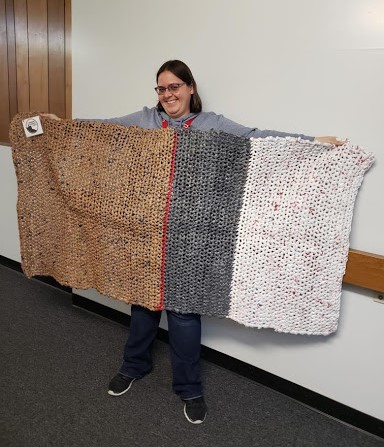 Karissa Uhl holds up a mat made of plastic grocery bags. Volunteers need about 800 bags to crochet one six-foot long mat. Photo courtesy of Karissa Uhl

When she walks into Kroger, Nancy Feakes doesn’t look for groceries, but the store’s barrels of recycled plastic bags, which she transforms into sleeping mats for the local homeless community.

While plastic bags can be recycled, they require a different recycling process that not all waste services provide. The local waste management company, Rumpke, lists plastic bags on its “Not for Recycling” list.

Since plastic grocery bags cannot be tossed in curbside recycling, Feakes repurposes them through the Bags to Mats program that she started last January at Oxford’s United Methodist Church.

Feakes brought the idea to Oxford after moving here from Missouri, where a local church had a similar program.

“There was a small group of retired ladies who needed people to flatten, cut and string the bags into plarn,” said Feakes.

Plarn, combining the words “plastic” and “yarn,” is what they call the strand of plastic bags used to create the mats. To make plarn, plastic grocery bags are cut into circular strips and looped together to form a long strand. It can then be crocheted using a large crochet hook or woven using a loom.

The group recycled the bags into mats to provide the homeless with a little comfort when sleeping in inadequate, outdoor conditions.

“When I got here, no one was doing that,” said Feakes.

Feakes recruited her neighbor, Lisa Biales, to help with the program.

“She had the plarn, but didn’t know how to make the mats,” said Biales.

The United Methodist Church holds a few service days each year devoted to making the mats, and Biales teaches participants how to crochet. The Church hosted two events last February and one during the fall.

When making the mats, Biales recommends stretching every 40 minutes or so.

“It takes a lot of hand strength,” she said.

Despite the physical difficulties, she called the experience “relaxing” and “satisfying.”

“It’s like a moving meditation,” said Biales. She even took a mat with her to work on during her vacation.

So far, the volunteers at the church have collectively made about 14 mats. For Biales, the mats take about 10 hours to make. The process can take up to 18 hours for Feakes, not including the time it takes to create the plarn.

Crocheting one mat requires about 800 bags cut into roughly 3,200 circular strips and the finished product spans about six feet to accommodate most body types.

Feakes often stops by Kroger or Walmart to pick up recycled bags. Kroger’s plastic bag recycling program collects bags in its two lobbies to be recycled into new bags or composite decking. According to a store manager, they do not keep track of who comes into the store asking for bags, but it happens frequently.

“Kroger is great about it,” said Feakes.

“You can get really creative,” said Biales.

Besides their aesthetics, Feakes says the mats are also very functional.

“They can be hosed if they get dirty and provide insulation to keep people off the ground,” said Feakes. “They don’t have a lot of value, so no one will steal them.”

Many of the mats made by the group are given to Karissa Uhl from Transitional Living Inc.’s Projects for Assistance in Transition from Homelessness (PATH), who distributes them to those in need.

As part of the homeless outreach program, Uhl visits local meal centers and homeless shelters to talk with those currently living in abandoned houses or the outdoors.

“Those living in the woods often have the most use for the mats, as they separate them from the wet ground and rocks,” said Uhl.

They currently have six or seven mats available, but there is always a need for more.

In Butler County, the Coalition on Homelessness and Housing in Ohio’s 2018 Point in Time Count reported 150 households and 193 individuals classified as “literally homeless.” Of the counties included in the report, as of January 23, 2018 Butler County had the highest number of both homeless households and individuals in the state.

“Homelessness is everywhere,” said Biales. “There’s a surprisingly big homeless community in Oxford, so the bags are staying local.”

Homeless Are All Around Us

Uhl says the homeless population in Butler County is increasing and the effects are more noticeable in the winter.

According to Uhl, during the warmer summer months, members of the homeless community may camp in the woods, notably the local Hueston Woods area. However, as temperatures drop, they seek refuge from the cold in libraries or cafés, making them more visible to the public.

Between 2016 and 2018, the Oxford Family Resource Center reported 93 households identifying as homeless, 47 percent of them having slept on the street and spent an average of six months as homeless.

Despite the considerable local statistics, programs like Bags to Mats provide extra comfort to those experiencing homelessness, while also reducing human impact on the environment.

According to Biales, the Bags to Mats program is open to everyone and the mats can be made at home at your convenience.

How to Make Plarn 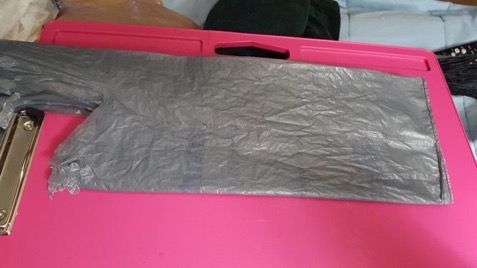 1. First, fold the bags in half. Photos courtesy of Nancy Feakes 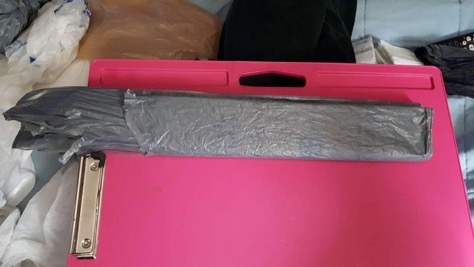 2. Fold the bags in half again. 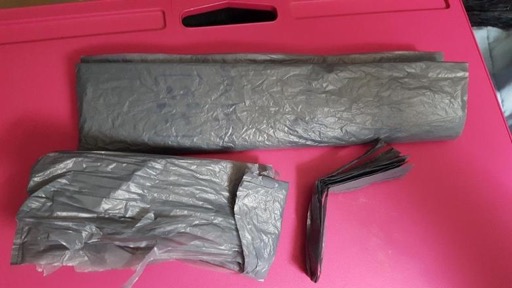 3. Cut off the handles and the other end. 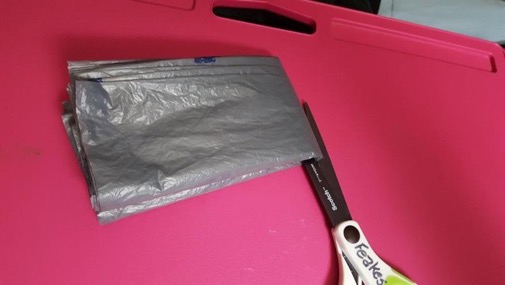 4. Fold the bags in half again, and cut along the fold. 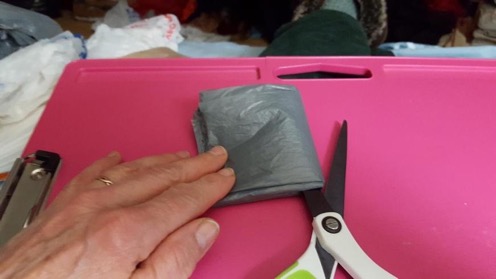 5. Fold and cut again to create four strips, which can be looped together into a long strand to make a roll of .plarn 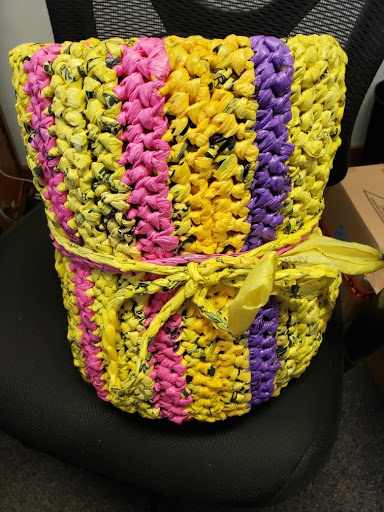 Different colors of plastic bags can be incorporated into the mats to create pleasing designs. Photo courtesy of Karissa Uhl