Athletes and coaches step up and speak out 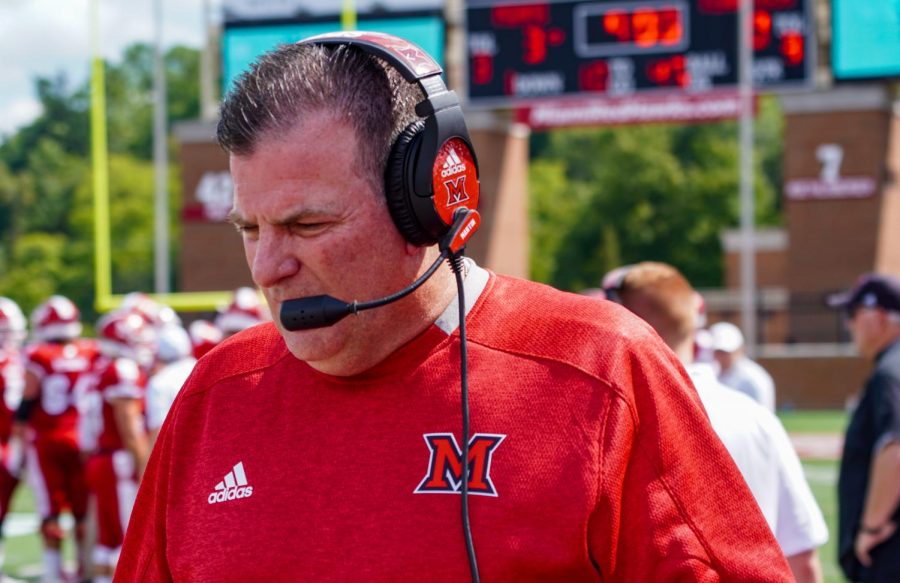 Miami Football Coach Chuck Martin writes on Twitter that he's learned the most by having conversations with his players and coaches. Photo provided by Logan Stevens

As protests against police violence and racial injustice continue across the world, athletic leaders in many communities are speaking out in support for the protests.

These conversations are happening in Oxford and at Miami with coaches, administrators and athletes.

Prominent among them has been Miami University football coach Chuck Martin, released a statement on Twitter.

“I have been watching, reading and talking about the protest going on all over the country,” Martin wrote on Twitter. “History has taught us that silence, indifference and inaction does not create change.”

Throughout the last week, Martin and his coaching staff have been having conversations with his players and coaches about their feelings and fears.

“You listen to their life experiences and what they’ve gone through or some of their fears, even if they haven’t gone through it, what they’re afraid of going through,” Martin said.

These conversations have involved talking about race and ethnicity in ways that they typically haven’t talked about before, according to Martin.

“By far the best information I have received has come from talking with my players,” Martin wrote on Twitter. “The words I continuously hear from my guys when I ask them about their feelings about the protests are: racism, empathy, fear and privileged.”

One Miami player who has used his voice to encourage change is sophomore offensive lineman Caleb Shaffer. He’s participated in protests back home over the last two weeks in Carmel, Indiana and Fishers, Indiana. A video of him speaking to a crowd of protesters was shared on his Twitter page. 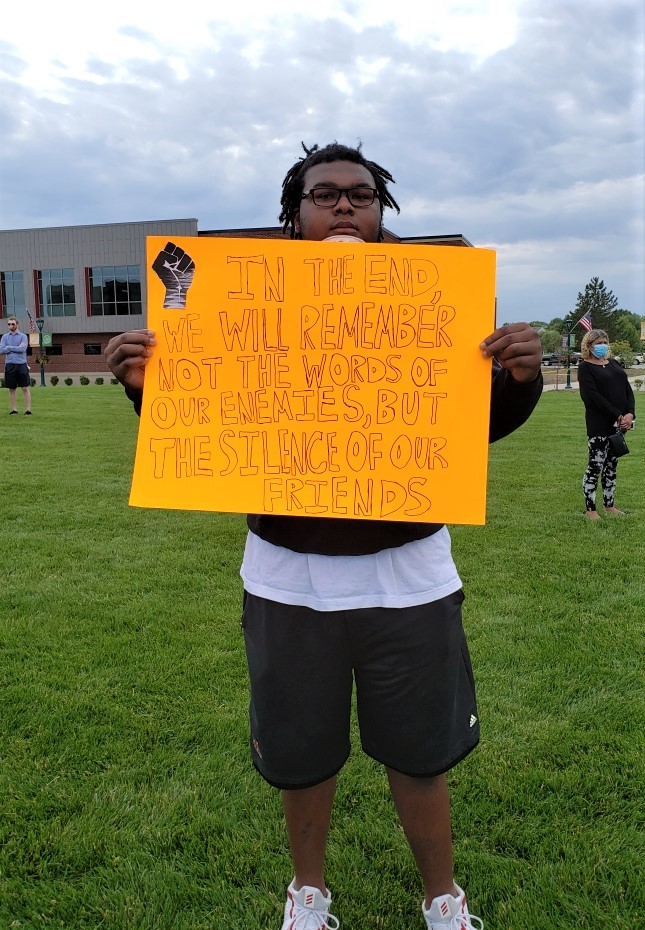 “In a time like this, everyone has a message,” Shaffer said. “Regardless of what you’re saying, to me, there’s two sides to this. Your message is either promoting unity or it’s promoting division. Division is what got us here in the first place. Division is what took George Floyd’s and the countless other innocent black lives over the course of the years.”

Although he’s been vocal and involved in protests that have had up to about 400 people at them this week, Shaffer admitted that he’s not always comfortable doing so.

“Most of the time I am scared to be out in public,” Shaffer said. “I’m kind of a homebody naturally, but then you take what’s going on, you take how people who don’t even know me perceive me because of what I look like out of fear, sometimes that has encouraged me to stay in the house. But I’m not going to apologize for who I am and I’m not going to change myself just because of what a few people may perceive me as.”

Since the protests started last week, people have been reaching out to Shaffer asking how they can help support the Black Lives Matter movement. Social media posts are nice, but taking action and donating are the key, said Shaffer.

“I’ve donated my money to the Bail Project (which) has been using those donations to pay bail for protestors who are arrested for peacefully protesting across the country,” Shaffer said. “To me it’s about getting out there and spreading the message, but also putting my money where my mouth is. To me, money is an action.”

To support the student athletes on the football team, a WebEx call was held with 100+ participants including the players and coaches, Miami Athletic Director David Sayler, Assistant Athletic Director for Leadership and Diversity Breanna Robinson, and other individuals from the athletic department. Robinson and Rodney Coates, a professor of global and intercultural studies, acted as moderators to facilitate the conversation.

“What we discussed was how we, as a football team, change and do certain things that can spread out to the rest of Miami University and help the black community,” Shaffer said. “You see everything going on around us, we can’t ignore it and we won’t ever ignore it because people on our football team have to deal with stuff like this every day.”

Other athletes across the country have spoken up as well, including NBA legends Michael Jordan and LeBron James, and Joe Burrow, quarterback for the Cincinnati Bengals. On Twitter, Burrow wrote, “The black community needs our help. They have been unheard for far too long. Open your ears, listen, and speak. This isn’t politics. This is human rights.”

Internationally, athletes have been showing their support in various ways. Borussia Dortmund’s Jadon Sancho wore a shirt underneath his jersey during a game when after he scored a goal, he took off his jersey and showed the message, “Justice for George Floyd,” written on it. FC Schalke’s Weston McKennie showed his support by wearing an armband with “Justice for George Floyd” written on it.

In the age of social media and viral trends, both leaders and community members are figuring out how to balance public messages with tangible action. On Tuesday, the hashtag #BlackoutTuesday started as a way for people on social media to reflect after the death of George Floyd and ended up becoming something broader. Many felt that movement became counterproductive to its initial purpose, including Shaffer.

“I feel like the intention behind it was pure, but I’ve seen people post a black square that from what I’ve seen of their actions, they aren’t quite about walking the walk,” Shaffer said. “I think it’s easy to post a black square, it’s respectable, but at the same time, I’m looking at some of the individuals who are doing this, and I just don’t feel like they’re genuine.”

The showings of solidarity and unity are good, but they can’t stop there, said Martin.

“To me that’s the challenge,” Martin said. “Whenever you’re trying to do something good, can you yell? Can you make it last? Do you change for the short period of time and then we all kind of settle back into what’s comfortable for us? I hope that’s not the case. If two months from now, we all just forgive and forget, and act like issues aren’t issues, then that would be very sad.”

As Black Lives Matter protests arise in all 50 states and countries around the world, listening and learning is the key, according to Shaffer. The end goal is unity and that can be achieved through having tough conversations.

“At the end of the day, I’m here to promote unity. What people aren’t doing enough of is reaching across the aisle and working to understand one another,” Shaffer said. “People kind of want to sit comfortably and judge people from the other side, but you don’t know what the other side is like. Until we genuinely on both sides come to understand what it’s like for the other persons, and despite what their experience is like, continue to love one another, I think we’ll end up right back here in 10 years.”

Shaffer continues to show up and be vocal because he doesn’t want his kids to live in a world with the same issues.

“If we can’t get it right here, now in 2020, you’re going to see me out there at 28 years old, 38 years old, and 48 years old still advocating for the same thing, because I’m not going to stop,” Shaffer said. “I don’t want my kids or my grandkids to grow up in this mess and I’ll do whatever I can. Maybe I can’t change the entire world, but I’ll put a little piece of it back together if I can.”