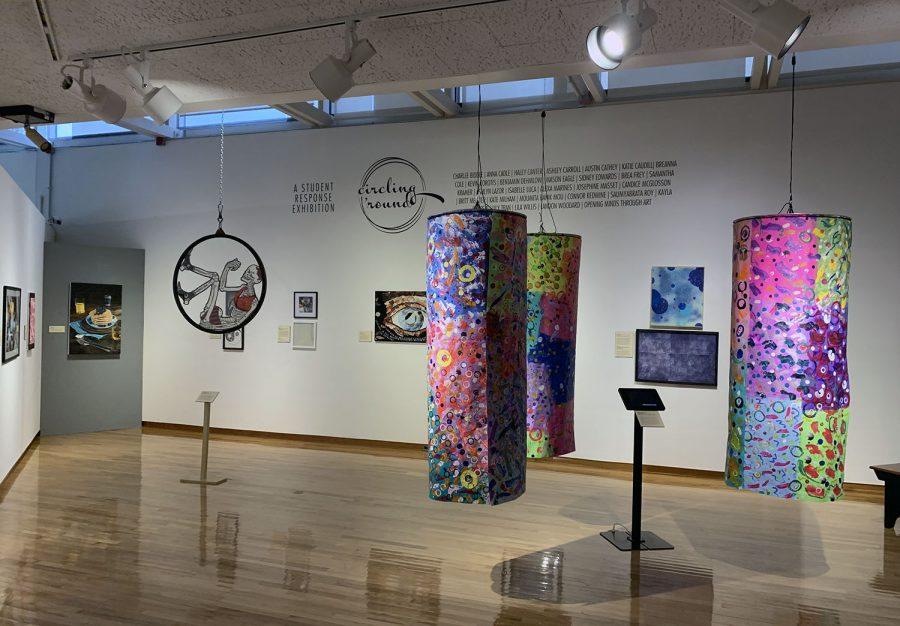 Visitors are asked to vote at the kiosk on their favorite pieces with the top three winning a cash reward. Photo by Emma Hendy

By By Emma Hendy

Miami’s Art Museum and Sculpture Park opened three new exhibits on Tuesday, Jan. 28 called the Myaamia Ribbonwork, Circling ‘Round, and Desire Conflict & Exchange. The showcase will be shown through Saturday, June 13. The admission is free and the art museum, located at 801 South Patterson Ave., is open from 10 a.m. to 5 p.m. Sunday through Friday and noon to 5 p.m. Saturday.
Circling ‘round
The Student Response Exhibition features works from Miami students of all years and majors focused on the circle. Twenty-three works were chosen out of the 98 submitted for the sixth student response exhibition the museum has held. The theme of the circle challenged students to interpret the representation, form and function of a circle. Students and residents are encouraged to view the exhibit and vote on their three favorite works at the kiosk in the showcase. A reception for the artists and the public will be held April 14 from 6 p.m. to 8 p.m. to award cash prizes to the top three favorite pieces.

“We approached the exhibit from the viewpoint of the Myaamia tribe so it’s really them telling us their story and not us telling the story of the Myaamia,” said Jason Shaiman, curator of exhibitions at the museum.

Silk ribbon was originally used in trade during the 19th century to make leggings, moccasins and blankets. With the revitalization of the Myaamia language, other arts of the culture such as ribbonwork followed this revitalization.

Shaiman said the art of ribbonwork was lost due to the Myaamia tribe losing their land and being forced to relocate. Members of the tribe had to disperse throughout the country and are located in almost every state said Shaiman. The exhibit allows members of the tribe, including some of the Myaamia students showcased, to experience a part of their lost art.

The exhibition will help celebrate the 20th anniversary of the proposal of the Myaamia Project. The exhibit will be featured during the time of the 2020 Myaamiaki Conference in April. 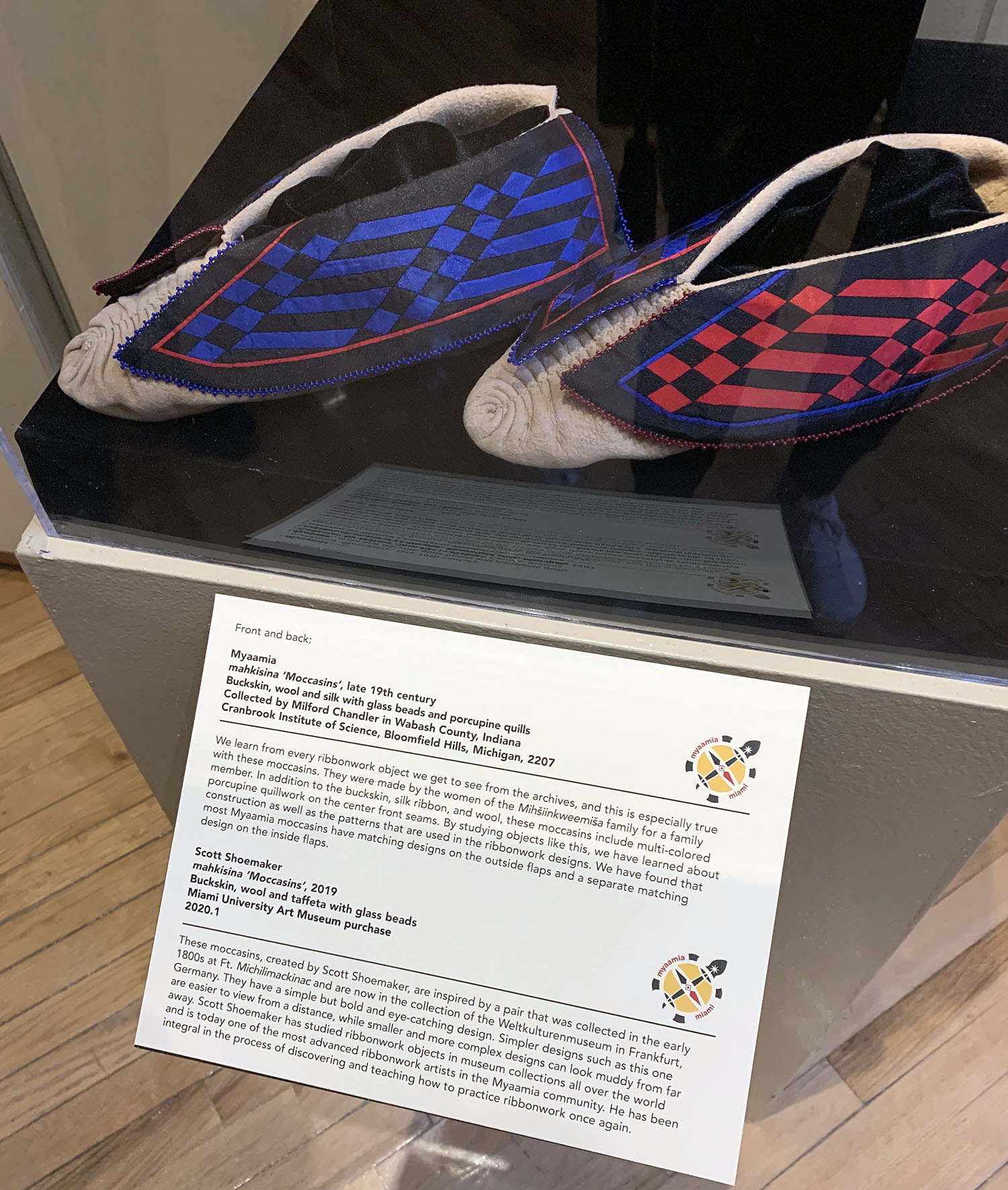 Moccasins were created by Scott Shoemaker based off the inspiration of the pair collected in the 1800s from the Myaamia tribe. Photo by Emma Hendy
‍
Desire, conflict and exchange
The students of the 2019 Arts and Architecture History Senior Capstone seminar and Shaiman and Laura Stewart, the collections manager/registrar, created an exhibit focused on the influence of the 19th century trade between East Asia and the West, primarily England, the U.S., France and Germany. The exhibit opens dialogue on the sharing of cultural concepts. 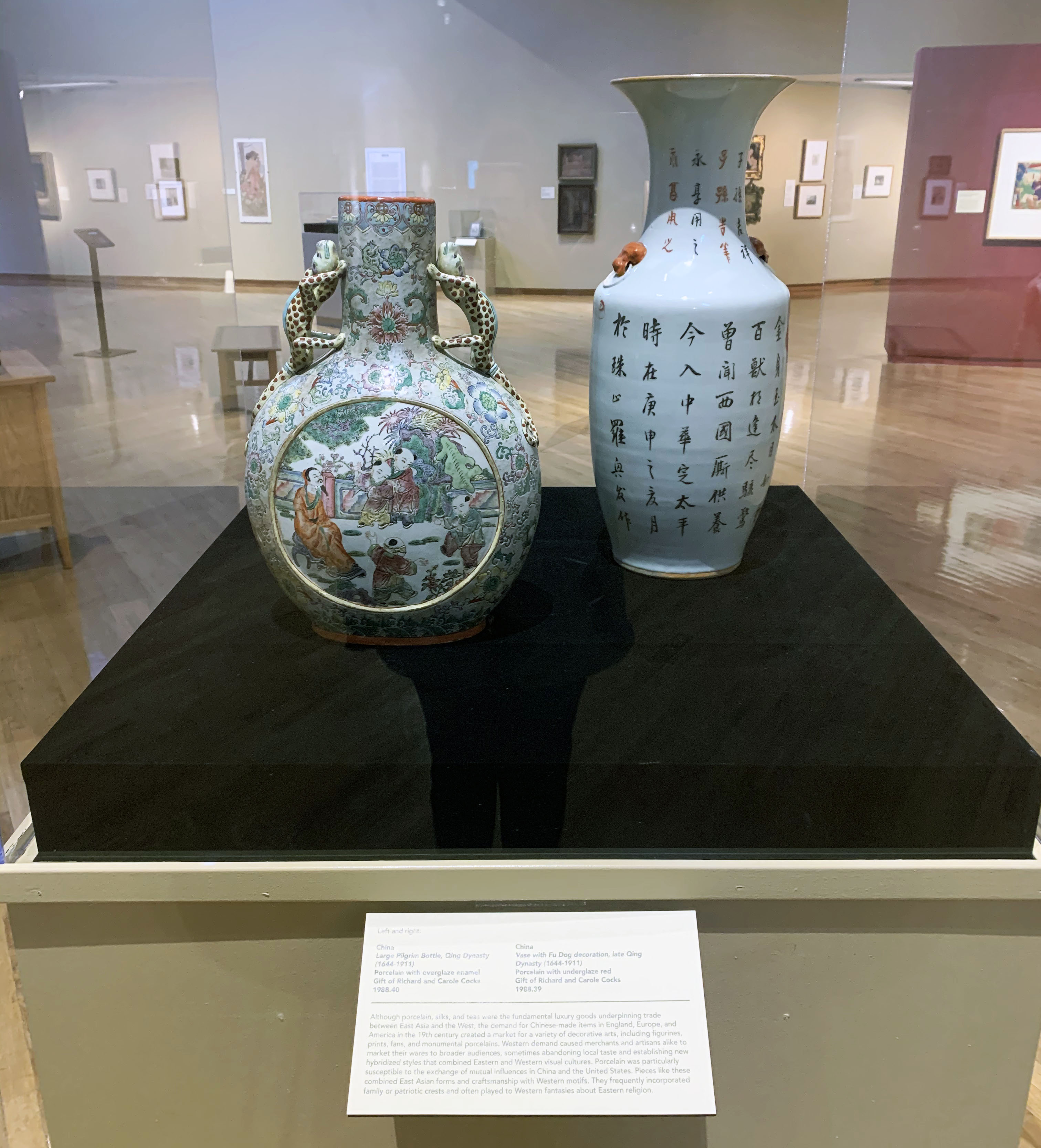 A strong demand for Chinese goods in the Western market in the 19th century caused East Asian artists to diverge from their local culture. Photo by Emma Hendy
‍

Due to American military presence, China and Japan were coerced into signing trade treaties with the U.S. The exhibit analyzes the collection process of the art through trade between East Asia and the West.

“It was more than just writing a paper…students were able to be involved in the museum collection and development process, it is something real and tangible and a great opportunity to put on their resume,” said Shaiman.