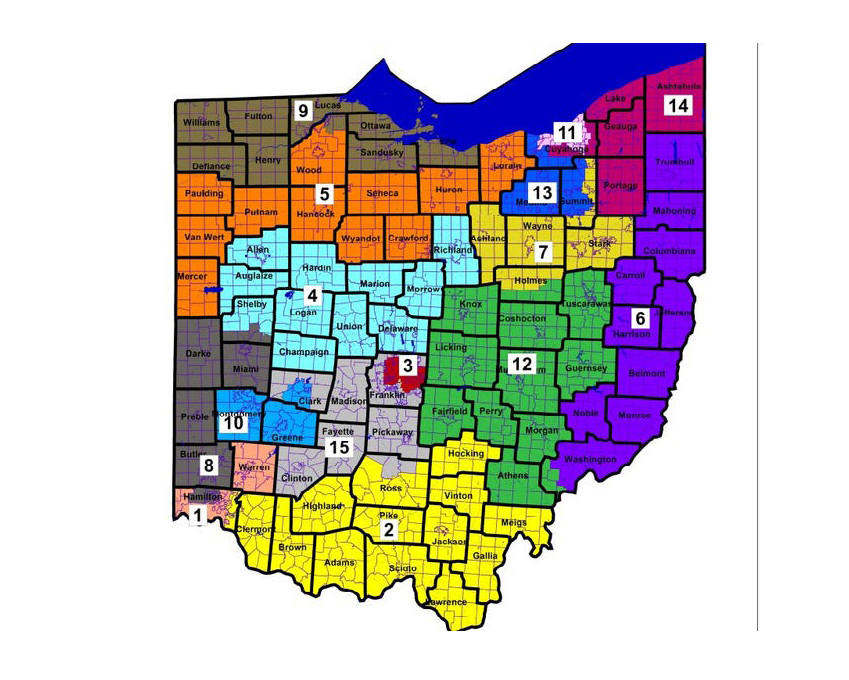 This map, drawn by the Ohio Redistricting Commission, shows the new boundaries of Ohio’s 15 congressional districts in the bill signed by the governor Nov. 14.

If the maps stand, they will be in place for four years.

The maps give Republicans a potential 12-3 advantage over Democrats in the congressional seats. Former U.S. Attorney General Eric Holder’s National Redistricting Action Fund filed a lawsuit Monday, Nov. 22, arguing the congressional maps are unconstitutional and go against the spirit of the amendments that aimed to reform the redistricting process passed in the last decade that has overwhelming public support.

Miami University Assistant Teaching Professor Christopher Kelley of the political science department said he thinks the congressional map is an egregious violation of the Ohio Constitution and that Holder has a solid case. He said making the case that the map violates the Equal Protections Clause or the Voting Rights Act in federal court will be harder, but not impossible.

“If this were just a mere fact of gerrymandering without the language of the state initiative, then I would say that though challenging it would have a long shot in getting the courts to agree,” Kelley said. “But, given the guidance by voters in 2018, and looking at the overactions of legislators, not to mention what will come out in discovery, it seems to me that the state Republicans in the House and the Senate did this because they wanted to do it, irrespective of what the law says.”

In 2015 and 2018, amendments were added to the Ohio Constitution to make the redistricting process more fair and representative. Part of this reform said Hamilton and Cuyahoga Counties could not be split into multiple districts. These new maps split those counties, although the major cities in those counties — Cincinnati and Cleveland — are not split.

In 1946, the Supreme Court ruled in Colegrove v. Greene that the redrawing of political districts is a political process, therefore, not one that the courts should get involved in. The courts have traditionally not involved themselves in what are considered “political questions.” These are instances where a different branch of government could better solve the problem at hand.

In the case of gerrymandering, the courts often argue that instead of going through the courts, citizens should elect state representatives who will fairly draw the lines. However, in the case of Baker v. Carr (1962), the United States Supreme Court acknowledged that the courts can hear gerrymandering cases if the plaintiffs can argue the Equal Protection Clause of the 14th Amendment is being violated. These cases often pertain to racial gerrymandering, which is when a particular racial or ethnic group is being split and their representation is diminished.

Voting rights groups may be able to make this case in some places in Ohio, including Cincinnati, Kelley said.

Under Ohio law, the new maps will only be in place for four years, rather than 10, because they did not meet bipartisan agreement. The maps passed in the Ohio House with a vote of 60 to 39 with all Democrats and four Republicans voting against.

“When compared to the other proposals offered from House and Senate caucuses, both Republican and Democrat, the map in S.B. 258 makes the most progress to produce a fair, compact, and competitive map,” DeWine said in a press release. “The S.B. 258 map has fewer county splits and city splits than these recent proposals and the current congressional map.”

Currently, Ohio’s 8th Congressional District includes Butler, Preble, Darke, Miami and Clark Counties, and part of Mercer County. It is represented by Congressman Warren Davidson. Under the map that was just passed, the 8th District would include all of Butler, Preble, Darke and Miami Counties, as well as part of northern Hamilton County and southern Shelby County.

According to a press release put out by DeWine, the cities of Akron, Canton, Cincinnati, Cleveland, Dayton and Toledo will not all be split on the same map for the first time since the 1840s.

Dana Miller of the League of Women Voters of Oxford said he thinks District 8 would be better representative if it incorporated some of the Dayton suburbs.

“At first look, these districts may look like better shapes, but they are still deeply flawed and not much better than the maps made in 2011,” Miller said.

Even though Ohio’s population did grow based on the 2020 census, it did not grow as fast as other parts of the nation, so Ohio lost a seat in Congress, bringing its representation down to 15 members from 16.

Senate Bill 258, was co-sponsored by State Senator George Lang (R-Butler County). The Ohio Senate passed the bill Tuesday, Nov. 16. The Ohio Legislature had a final deadline of Nov. 30 to pass new Congressional maps, after several other deadlines were missed, including one last month where the newly-created bipartisan Ohio Redistricting Commission (ORC) had the opportunity to redraw the lines.

DeWine signed the four-year map into law, despite many Democrats and voting rights groups urging him to veto it. The Princeton Gerrymandering Project gave the map an overall grade of ‘F’ for partisan fairness.

The bill also pushed back the filing deadline for the May 3, 2022 primary election to March 4, instead of Feb. 2.

The ORC passed new boundaries for the Ohio House and Ohio Senate Sept. 16. The Ohio Supreme Court is set to hear oral arguments Wednesday, Dec. 8, in a case filed by the League of Women Voters, the American Civil Liberties Union and the A. Philip Randolph Institute.

These groups claim the maps passed in September are unconstitutional.

“After decades of working to end partisan gerrymandering in the Buckeye State, the League of Women Voters of Ohio asks the Ohio Supreme Court to defend the rights of everyday Ohioans to have legislative districts that serve and represent them rather be rigged to favor the short-sighted and selfish interests of political parties and candidates,” Jen Miller, president of the League of Women Voters of Ohio, said in a press release.