Oxford area continues to be friendly for bicyclists 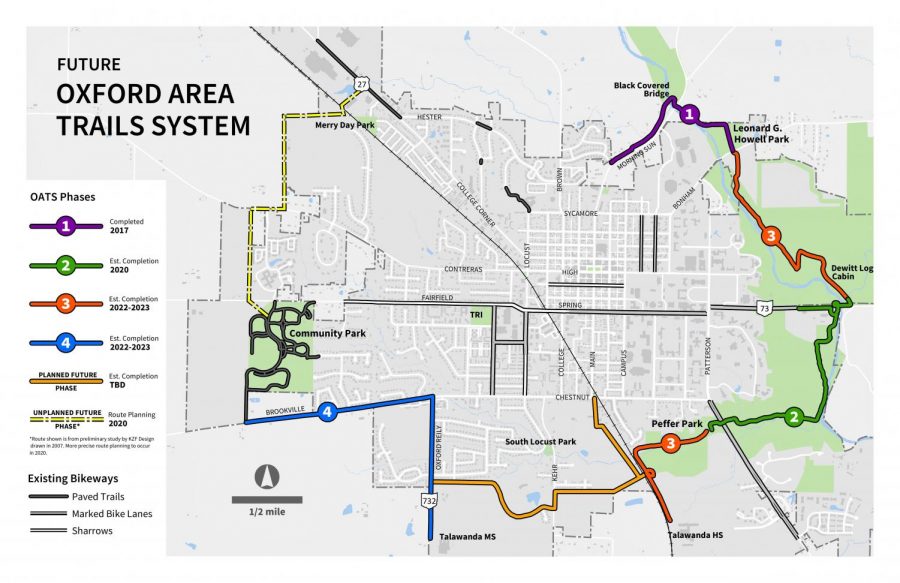 A map of the Oxford Area Trail System show what is completed and what is not. Photo provided by Jessica Greene

Creech was looking for a calm and scenic route, without the traffic and intimidation of cars as he graduated his son from a Burley Trailer — one of the bright-colored wagons that drags behind a bike — to a Trail-a-Bike, essentially a kids’ bike that attaches to the back of a bike that allows pedaling without a need for steering.

When they arrived, the path was packed with bicyclists and pedestrians. And that’s where the idea for Oxford Area Trails (OATs) was born.

“It was a nice day in February — it was like in the 50s,” said Creech, then-owner of Oxford’s Bike Center and an avid bicyclist. “That place was absolutely popping and I thought ‘oh my gosh, we have as much to offer as Yellow Springs does. Why don’t we build something like that here (in Oxford)?”

Creech and other bicycling enthusiasts proposed the Oxford Area Trails project, with a 12-mile loop around Oxford intended to connect the area’s major recreational sites, schools and historical areas. They even had plans drawn out and began fundraising. But after a series of roadblocks the progress began to fizzle out.

About a decade later, when Creech got word that city officials were looking at possibly building a bike route, he knew he’d have another chance to make his pitch. Assistant City Manager Jessica Greene said she’ll never forget the day Creech presented the plans in 2013.

“Marty Creech walks in with this giant tub. And he says, if you want a bike path, we have a bike path,” Greene said. “…There it was, they had designs ready, they had routes, and it really launched us from concept to ready to go pretty quickly.”

Since then, with direction from Greene and community development director, Sam Perry, Oxford Area Trails has secured levy in 2018 and grants for funding, as well as starting construction on some parts of the trail with over a mile completed. Greene said the target year for completion is 2028, and that when the levy passed in 2018, while she was 40, she set the goal that she’ll be able to ride around the loop on her 50th birthday.

About a mile of the loop has been built thus far, near the Black Covered Bridge historical site, and another section is being built between Peffer Park and Route 73, which is scheduled to be constructed by October. Greene said about half of the necessary funding for the l2-mile loop has been raised so far.

Greene thinks the trail system will be a powerful amenity for residents.

“People can hopefully get around town whether they want to do it recreationally or for transportation,” Greene said. “I think that’s a huge amenity people look for when they’re looking for places to live. I think if we want to continue to be competitive in having resident attraction, we need to really highlight the amenities like this that we have and that we’re working toward.”
Trails could attract visitors and bicycles
Greene added that Oxford Area Trails will also boost the local economy by attracting visitors.

“You have visitor traffic — getting people to come into town and ride, and go uptown and have a coffee or ice cream or grab lunch,” Greene said. “We realize in the city of Oxford that the visiting economy is a huge part of what we’re dependent on — we have our residents, we have our students and we have visitors.”

Even without the Oxford Area Trails, Oxford has historically been a bicycle-friendly town, with a grassroots support for bicycling. Past events, which have been staples of the community for years, include: Oxford Odyssey, organized by Creech, where bicyclists would start off Uptown to the theme song of “2001: A Space Odyssey” and bike 10s of miles through surrounding towns; the 20/20 10/10 (20 teams doing 20 miles or 10 teams doing 10 miles) collegiate race for Miami that was historically similar to the Bloomington, Indiana race that the 1979 movie  “Breaking Away” was based on; and various bicyclists and bicycling groups. 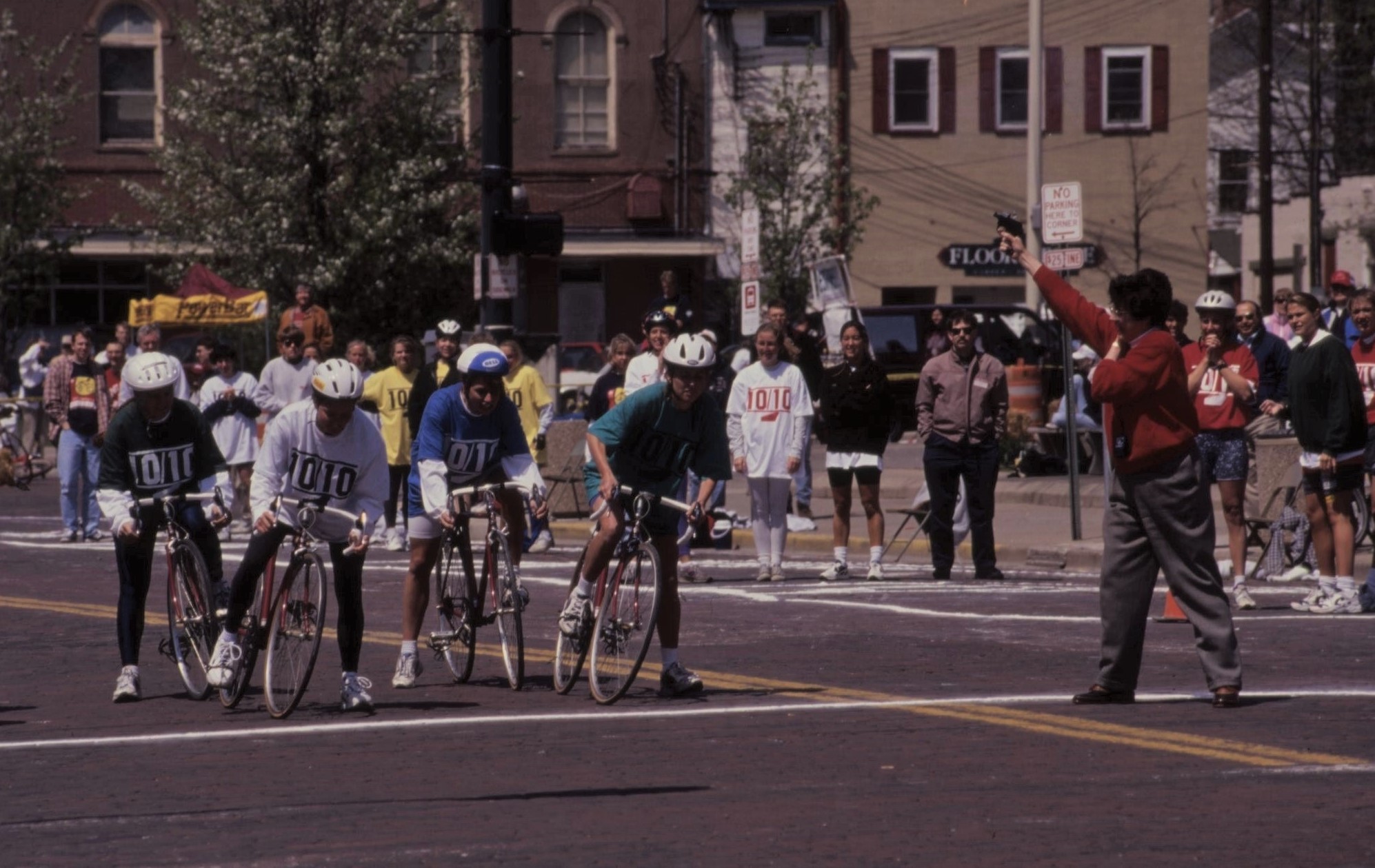 The Miami Cycling club routinely held races in the 1990s that started on the streets of Oxford. Photo provided by Paul Reidy
‍

Bill Scott, a Miami University emeritus professor of paper science and chemical engineering, is an organizer of a group of 59 people who will plan about two or three rides a week, including a Saturday brunch ride. About half the group is made up of retirees, men and women ranging from age 45-80, and they plan their rides through an email listserv. Scott said one of their traditions is doing birthday rides around someone’s birthday, where members of the group will ride the amount of miles the person is turning. Scott said he’ll be doing his own birthday ride with a group this Friday, June 12  — riding 80 miles for his 80th birthday.

“Because (many of us) are retired, we can do long distances,” Scott said. “I guess the shortest ride we would do is to go to College Corner and eat and come back, and that’s 12 miles.”

For their long rides, the group usually drives to Trenton to get on the Little Miami Scenic Trail, or they drive to another point where they can get on a long trail. Scott said the group doesn’t have a name, but that it stemmed from the Oxford Bicycling Club that no longer exists.

Paul Reidy, a Miami assistant professor in the kinesiology and health department and the faculty advisor for the Miami Bicycle Club, is also organizing local group rides, by way of hub he started on a social media exercise platform, Strava. The club is open for anyone interested and has grown from 20 to 60 members since January. Reidy said he’s found the growth and interest in Oxford remarkable.

“One thing that’s great here, is you can go any direction — north, east, south, west…” Reidy said. “I’m someone who really likes to just explore…I think I’ve rode every street in Oxford already — and around it — I’ve explored all the way down to almost Oldenburg, Brookville, up to Richmond . . . I’ve made it down South through Hamilton, Miamitown, Harrison . . . It’s really any direction, you have great roads.”
Cycling is a great way to exercise at a social distance
Reidy said each of the last two months he’s hit 1,000 total miles of bicycling, as he’s been looking for things to do while quarantining for the COVID-19 pandemic.

Since moving to Oxford in 2019 from Salt Lake City, Utah, which Reidy called a cycling paradise, he has been proactive in helping organize local bicycling and compiling history to try to bring some of the organization of Oxford’s bicycling past back to the future.

Bob Feldman, a Miami visiting professor in the kinesiology and health department who is known as “Biker Bob” among local bicyclists, has been focused on making Miami’s campus more bike-friendly. Feldman teaches mountain biking and bike maintenance classes at Miami.

“Oxford and Miami were very bike-friendly, but things started changing at the turn of the century,” Feldman said. “At one point Miami said on its brochures “If you want to have a car, you should look at another university,” because we didn’t allow cars. But that’s changed . . . It just got out of fashion here.”

Feldman is moving to British Columbia when he retires this summer. “I’m leaving, but I’m hoping to leave a bit of a legacy,” he said with what he’s done to support local biking. According to a Miami Communications article, Miami was honored with a bronze Bicycle Friendly University award, with the help of Feldman and his students. And, Feldman said one of his own former students will take over his courses when he retires. 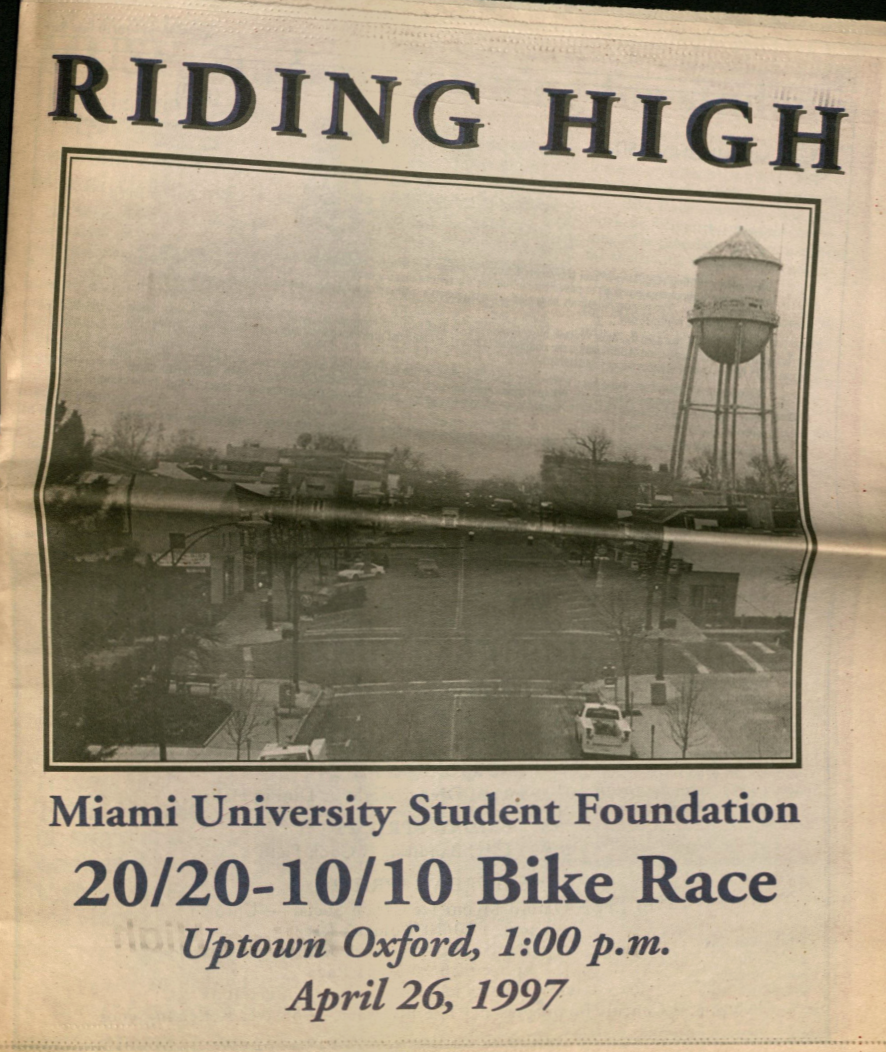 Not so many years ago, bicycling was big news in Oxford. Photo provided by Paul Reidy
Creech also mentioned noticing when student interest in bicycling started to wane. He said that when Miami didn’t allow cars, and bicycling was still very popular on campus, that the Bike Center would even get invited to campus for freshman orientation, as a private business, so he could talk to students about the importance of owning a bike. Creech said the current generation of kids just don’t seem to ride bikes at as much as they used to, but that he hopes the Oxford Area Trails will be able to inspire young bicyclists in Oxford when completed.

“This next generation will be able to get on their bike in a community and ride to the middle school or the high school on a path where you don’t have to do any crossing of any major roads,” Creech said. “You can ride your bike to soccer practice — that was the whole concept behind this bike path is we were going to connect all the recreation areas, all the schools, all the historical sites, all connected by a loop which would then be connected to a neighborhood so you’d be able to get to those areas… these kids, hopefully will be more acclimated to the whole idea of using their bikes for transportation and it may be a different story when they get to college”

Creech, now a local real estate agent after selling his bike shop about 15 years ago, said when the trail’s construction is finished it will be a powerful moment, that has been a long time coming since the moment in the late 90s, when he had the idea for Oxford Area Trails on a ride with his young son hitched to a Trail-a-Bike in Yellow Springs.