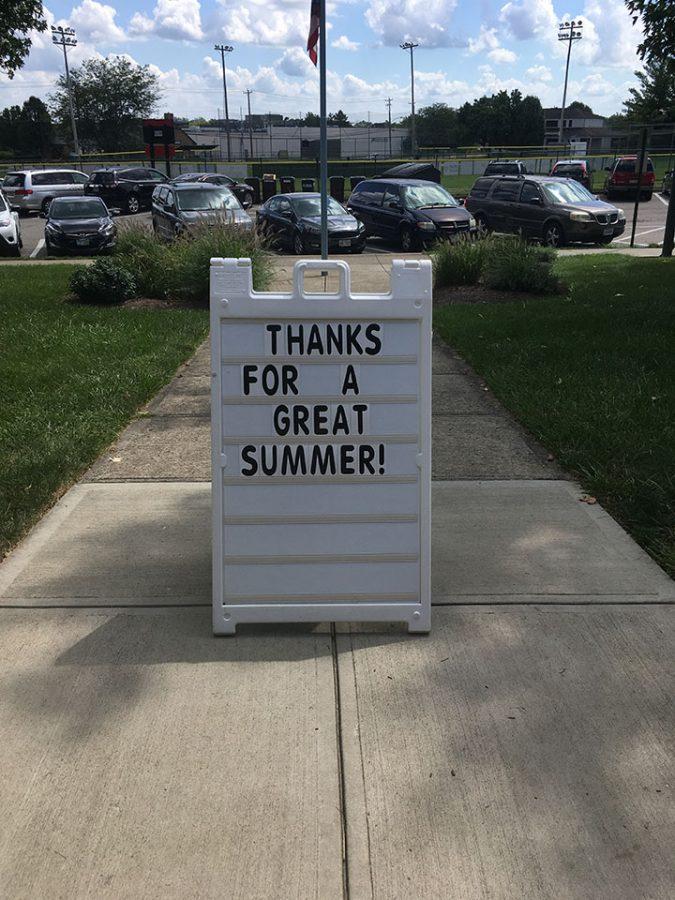 The sign in front of the pool bids swimmers farewell. Photos by Rachel Barry

The Oxford City Pool ended its final season on Labor Day, as 327 people sought relief from the heat in its cooling waters.

According to the online weather service Intellicast, Monday’s 93-degree temperature tied a record from 2002 for the hottest Sept. 3 here in Oxford.

The 45-year-old pool at 6025 Fairfield Road is being replaced by a new aquatic center now under construction about a mile away in Oxford Community Park, at 6801 Fairfield Road. The new pool is scheduled to open next May.

Parks and Recreation Director Casey Wooddell said that this Labor Day weekend turnout was higher than a usual weekend afternoon. People began pouring in as soon as the pool opened at noon, and many remained as the pool closed at 7:30 p.m.

“This is maybe the busiest I’ve seen it all summer [besides] maybe one or two other times, but it was when we had events,” Alison Kleibscheidel said Monday as she kept one eye on her children, who were splashing in pool.

Jessica Pechan, who also enjoyed the pool this holiday weekend, said she had been going there for 30 years, for everything from her own middle school swim meets to her children’s birthday parties.

“It’s the last day, and … we definitely wanted to get one last shot in before it goes,” Pechan said.

While people have nostalgic feelings about the old pool, many are looking forward to the opening of the new aquatic center.

“I think it’s a little bit sad because there’s memories here, and it’s just been open for a really long time,” Kleibscheidel said. “But I also feel really excited because this pool is definitely on its last leg and needs a lot of work, and it feels exciting to have something new and fresh.”

Wooddell and others at Oxford Parks and Recreation have received mostly positive feedback regarding the city’s plans for the new pool.

“I would say about nine out of 10 people that I’ve talked to about the new pool are just extremely excited that we’re getting an aquatic center instead of the pool that we have now,” Wooddell said.

They have already broken ground on the new pool, set to open May 2019. There will be a public information session about the new aquatic center on Thursday, October 11 at 6:30 p.m. at the Community Arts Center.