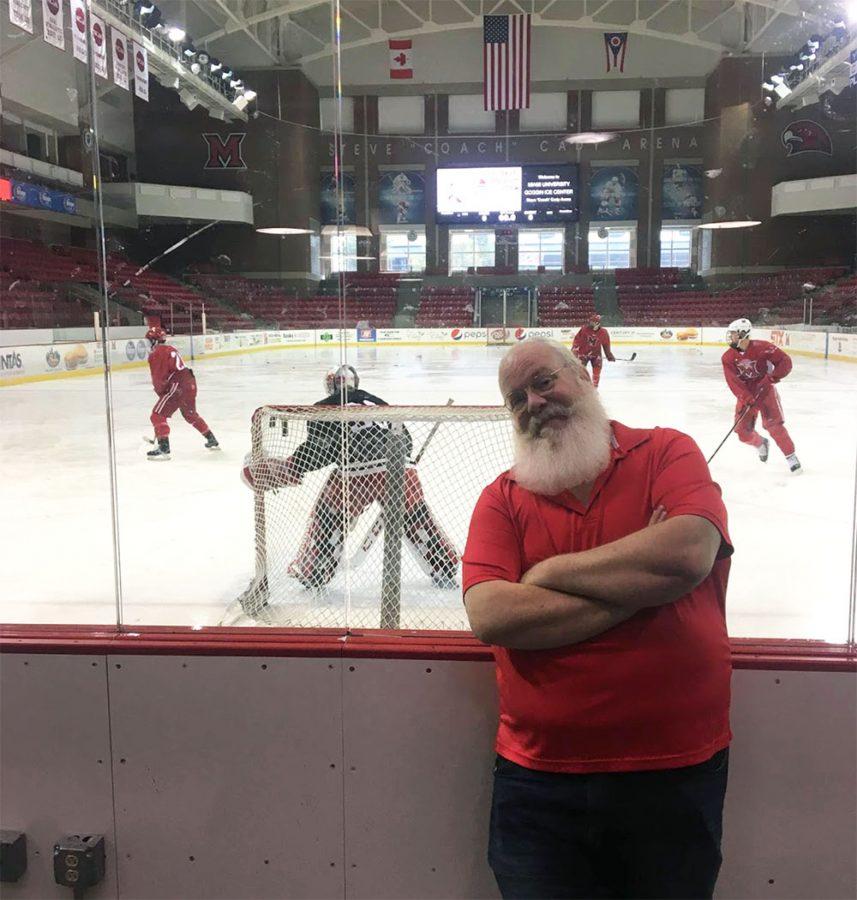 Scott Shriver, who looks a lot like Santa Claus, has been announcing Miami’s ice hockey games for 24 years. Photo by Matt Wininger

Scott Shriver looks like Santa and has the booming voice of a hockey announcer, which is what he is – on both counts.

For 24 years he has been announcing Miami hockey games and on Dec. 7, he will portray the Jolly Old Elf in the Oxford Holiday Festival.

Having accepted the role of Public Address Announcer for Goggin Ice Center back in 1995, Shriver has worked a multitude of events for the university. He holds a handful of responsibilities from announcing the members of each team to ad-libbing in-game advertisements. To be successful, he tries to arrive to each event an hour before it starts so that he can be as prepared as possible.

“I can’t change my voice, but I can change the way I prepare,” said Shriver. “I always ask if there is anything you want me to do differently please tell me.”

That preparation is what his co-workers believe has made him so successful over the years. Phil Johnson, associate director of sport and facility services at Miami, called Shriver “a true professional” and “someone who diligently does his homework prior to every event he works.”

Ellie Whitter, the associate director of marketing and in-game presentation, gets to spend time with Shriver in the announcing booth and had a similar understanding.

“He brings his own notes, score sheets and other ‘tools of the trade’ that make him successful.  After so many years of announcing, he knows what information he needs and in what format,” Whitter said.

Shriver had his first taste of announcing when he was called out of the stands to announce the starting lineup at a volleyball game 31 years ago. That moment opened up a career interest for Shriver and now serves as motivation.

“My constant fear, and understanding, is that at any point they can say we can get somebody out of the stands to do this, we don’t need this guy,” Shriver said.

But with Shriver working nearly every sport at Miami, one could argue that they do in fact need him. Among football, field hockey, softball and ice hockey it is still volleyball that he finds his favorite sport to announce. When it comes to hockey, he believes that Goggin has always been one of the best college hockey environments in the country, citing the introduction of an organ and music during games as reasons why.

That environment is one of the reasons why he has had so much fun in his role. Leading cheers and announcing game altering moments allow him to help create a home ice advantage that Goggin has been over the years.

“Doing anything as part of a community effort, community cheer, sieve cheer, is so much fun when you’re a part of it,” Shriver said.

That sense of community has been a part of Shriver’s entire life, having graduated from Miami and teaching in the Talawanda schools. After retiring, he has focused his free time on his role as an announcer and his job as a professional Santa. This year, he will be Oxford’s official Santa for the Oxford Holiday Fest Dec. 7, in Uptown Park.