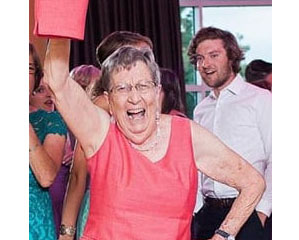 Pearson, 94, known for her exuberant support of Miami athletics during her time in Oxford from 1981 to 1992, died Aug. 27, at her home in Centerville, Ohio.

Concerns over public gatherings due to COVID-19 delayed the planned funeral visitation for several months.

In her obituary, Pearson’s children noted her inclination to be relationship-focused and her active involvement in many Oxford organizations. She served on the boards of Hospice of Miami Valley, The Knolls of Oxford, Westover of Hamilton and Children’s Services. She also volunteered at Planned Parenthood and McCullough-Hyde Hospitals and was an active member of PEO.

For those wishing to give back in Winifred’s name, please consider (in lieu of flowers) a donation to the Paul & Winifred Pearson Scholarship Fund in Arts & Sciences (#3071-001) at Miami University 725 E. Chestnut St., Oxford, OH, 45056.