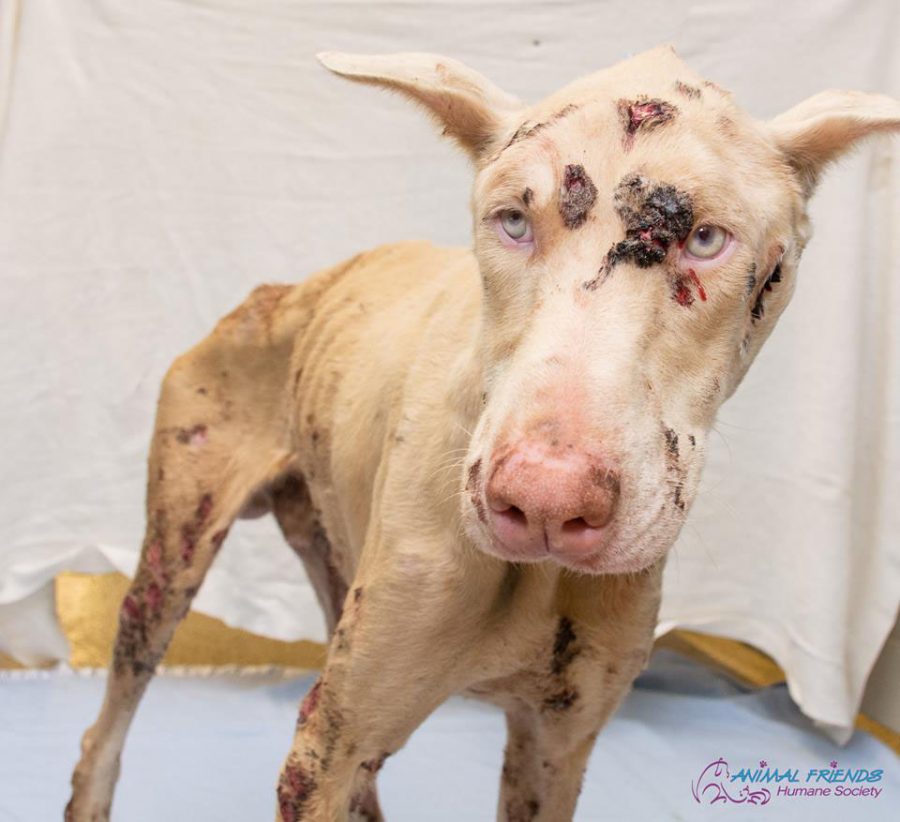 Animal Friends Humane Society, Butler County’s largest non-profit animal shelter, posted a picture of a dog they received after he was removed from his owner on Facebook April 23.

The dog, which the Humane Society nicknamed “Lou,” was what they referred to as a “cruelty case.” Images in the Facebook post showed the emaciated Doberman Pinscher with open sores all over his body.  The post went viral within the Oxford-specific Facebook groups garnering 3,400 reactions and 1,500 comments.

The dog’s owner, David Neanover, was charged with animal cruelty. Despite efforts to save the dog after it was confiscated by the county, Lou later died from his injuries and neglect.

Though Lou’s case was particularly egregious, animal neglect can be common in college towns, including Oxford.

Miami University policy prohibits students from keeping pets in residence halls, with the exception of fish and service animals, and many off-campus houses and apartment complexes have similar rules. However, it’s not uncommon for students to take in strays, and without a plan for the animal’s care once the school year ends, these strays can end up back out on the street.

Angela Schatzle, a public safety assistant with the Oxford Police Department, said she does notice an uptick in stray animals around Miami’s breaks. Her job is to take animals that have been abandoned to the Animal Friends Humane Society.

Schatzle explained that it’s difficult to definitively link the stray animals directly to students unless the animals have been left in student housing, but the timing of increased numbers of strays around the end of the semester does suggest students contribute to the issue. She also clarified that, in issues of abandonment, it’s often not the fault of the pet’s actual owner, but rather a person who was asked to care for the pet in the owner’s absence and failed to check up on the pet as often as necessary.

Tara Bowser, executive director of the Humane Society, agreed that the organization takes in more animals around the end of the semester. Bowser said many animals are dropped off in locations close to student housing as well.

“College Corner Pike is notorious for having animals dumped there,” Bowser said. “We hear a lot from families who’ve found animals over there.”

These animals often exhibit signs of neglect. They are typically dogs that have their fur matted or are malnourished, or both.

It is even more troublesome to determine whether stray cats have been abandoned by students.

“Because cats are classified as free-roaming animals in Ohio, they’re just brought in to be spayed or neutered and then released,” Bowser said.

Official abandonment cases are rare, as they require the person who dumped the animal to be identified and brought to court. It is also common for the landlords that own student housing to handle cases of abandonment themselves without contacting OPD or Butler County, and so these cases can be hard to track.

The case of Lou was one of neglect and abuse, rather than abandonment. Neanover is accused of leaving the dog chained in the backyard with no food or water, and he was found with rocks in his stomach, according to police.

Neanover’s $25,000 bond was set at the Butler County courthouse in Oxford on May 2, and many protesters gathered outside for animal rights, holding signs that said, “Real men don’t abuse animals” and ‘Lou deserved love and affection.”

Neanover waived his right to a preliminary hearing on May 9, and his case has been bound over to a grand jury.

People interested in volunteering with the Animal Friends Humane Society can attend their program orientation at 1820 Princeton Road, Hamilton, OH 45011 from 9 to 11 a.m. this Saturday, May 18.