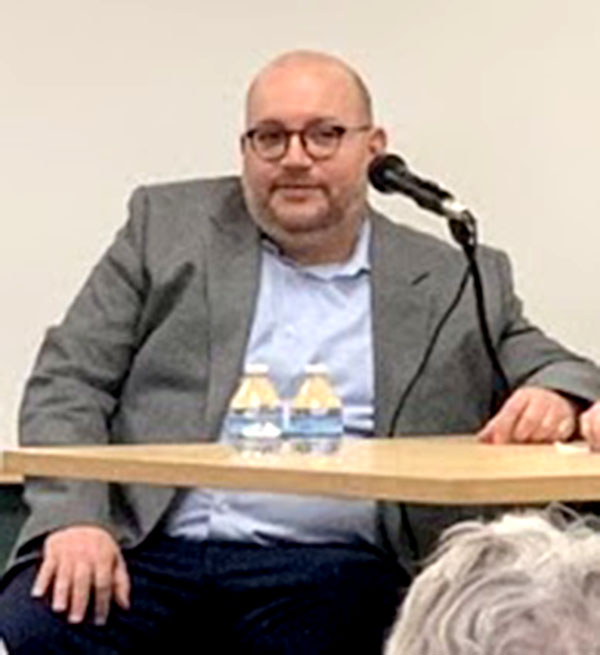 Washington Post reporter, Jason Rezaian, spoke at Oxford’s Lane Library about the 544 days he spent in an Iranian prison. Photo by Lexi Scherzinger

They said they were going to execute him.

They said it every day for a year and a half.

Yet four years later, there he was, sitting in the Havighurst Meeting Room of the Oxford Lane Library, fidgeting with the round brown glasses perched upon his nose.

Jason Rezaian, a journalist with The Washington Post, visited Oxford this week. He spoke to students in the Media, Journalism & Film department on Tuesday afternoon, followed by a Q&A session at the Lane Library the same evening.

Rezaian is far from the average reporter. After five years of working for The Post as an international correspondent in Tehran, Iran, he was arrested and spent 544 days in an Iranian prison.

After his release, Rezaian wrote a memoir, “Prisoner.” However, the Oxford events weren’t just to promote the book. Rezaian’s mother, Mary, has been an Oxford resident for more than a year and a half.

Mary Rezaian is a born American, but her late husband, Jason’s father, was Iranian. With eight brothers and sisters, three of which lived in the Bay Area of California where Rezaian grew up, most of the family he spent time with was of Iranian descent. He felt connected to the culture even before ever stepping foot in Tehran, and he’s always been particularly close with Mary.

“I always relish the opportunity to speak with students, especially ones that are studying journalism,” Rezaian said. “It’s such an important time right now in American journalism. This provided the perfect opportunity to do something useful and also see my mom.”

The community welcomed Rezaian with open arms and open ears, as more than 120 people crammed into the tiny second-floor meeting room in the library to hear him speak.

Jacque Gentile, part-owner of The Bookshelf in Cincinnati, was working the book sales table at the door of the event. “This is the third event here we’ve had this year, and this is by far the biggest crowd,” Gentile said. “The last two had good turn-outs, but it was never standing room only like this.”

The event began with librarian Sarah Gifford asking Rezaian questions for about 40 minutes, followed by half an hour of audience questions and a book signing. The first question from the audience did not ease into the subject: they wanted to know what happened the day Rezaian was arrested.

He had just returned from covering nuclear negotiations with Iran in Vienna, Austria. Rezaian and his wife, Yeganeh, were preparing for a trip to the U.S. That afternoon, they both began receiving dozens of strange emails, and their social media accounts were hacked. “It was too big and over our heads to figure out who was doing it,” Rezaian said.

The couple planned on attending his mother-in-law’s birthday party that day. They left their apartment and took the elevator downstairs. When the doors opened, three security officers appeared, all pointing guns at Rezaian’s head.

The officers brought Rezaian and his wife back to their apartment and ransacked it. What started as three officers became more than a dozen. After the search, the two were blindfolded, handcuffed and put in the back of an unmarked van to be taken to prison.

The sadness in his eyes as he told the story was nearly imperceptible. He occasionally took pauses in speaking to collect himself. He had a habit of using humor as a coping mechanism, and it kept the audience laughing, but the trauma had clearly not ceased to exist.

He always knew he could be arrested while working in Iran. He just never thought it would actually happen. “There’s no first amendment in Iran,” Rezaian said. “There are lines you cannot cross, but they aren’t clearly drawn out for you.”

The first 35 days of his imprisonment, Rezaian was cut off from all contact with his wife. She ended up spending 72 days in the prison, all in solitary confinement.

“It was horrible knowing she was there and not knowing what she was going through,” Rezaian said. “I had no sense about her whereabouts, her wellbeing. When I was finally able to see her, it was a relief, but also a terrible sense of despair and responsibility for this situation we were in.”

Rezaian also spent time in solitary: seven and a half weeks, in a four-by-eight-foot cell. “The psychological impact sets in after a few days and lingers for a really long time,” he said.

Rezaian continues to fight for the rights of international journalists and pushes for an end to the use of solitary confinement permanently. “Journalists should be immune to this sort of harassment,” he said. “I felt betrayed. I should not have been treated this way.”

Despite the many months of imprisonment, he never gave up hope. “The first days and weeks are so confusing, and you’re so sure that it’s going to get resolved. It’s not an initial fear,” Rezaian said. “That creeps up on you over time. You’ve been there for several months, and you don’t see any progress, and you start to think ‘is this ever gonna end?’”

Rezaian spoke about his road to freedom, and how his experience led him to meet some of the world’s most influential people. Jeff Bezos, the richest man alive and owner of The Washington Post, picked Rezaian up from a German military hospital following his release. “I went from not being able to choose when I was allowed to use the bathroom, to the private jet of the richest man in the world,” Rezaian said. 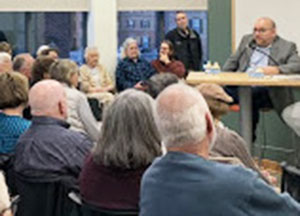 A standing-room-only crowd listened to Jason Rezaian’s story Tuesday night at Oxford’s Lane Library. Photo by Lexi Scherzinger
He had always wanted to write a book about his time in Iran, even before his capture. He realized that the imprisonment would be something people would want to read about. However, writing the book wasn’t easy.

Writing everything down was like re-experiencing the darkest moments of his life, but now that the book is out in the world, it feels abstract, like it’s only a story and nothing real.

“It was like a scab that you peel back while I was writing it,” he said. “Now the scar tissue is hardened, and it’s a story that I can tell without it upsetting me too much.”

He says the book is the best thing he’s ever written. “I’ve lived the most interesting life of anybody I know,” he said.

“I doubt I’ll ever be able to write in such a personal way about any topic again,” Rezaian said, trailing off. “You get to do a book like this once, you know?”

It felt strange for him to come back to a country where he had become a household name without his knowledge. “Coming back to a world of people who thought they knew me was… jarring,” he said. “I have a lot more empathy now for people like Monica Lewinsky.”

Rezaian saw Tehran as a second home, but he doesn’t see himself going back, at least not anytime soon. He still thinks about it every day.

The biggest thing Rezaian took away from his experience? Humanity.

He didn’t expect to find things to laugh about in captivity, to be able to recognize the absurdity of the situation he was in. As much as he hated his captors, they were humans. He saw their humanity.

“We should always remember that whoever we’re dealing with, they’re a person,” Rezaian said. “There is a commonality there that can’t be erased.”