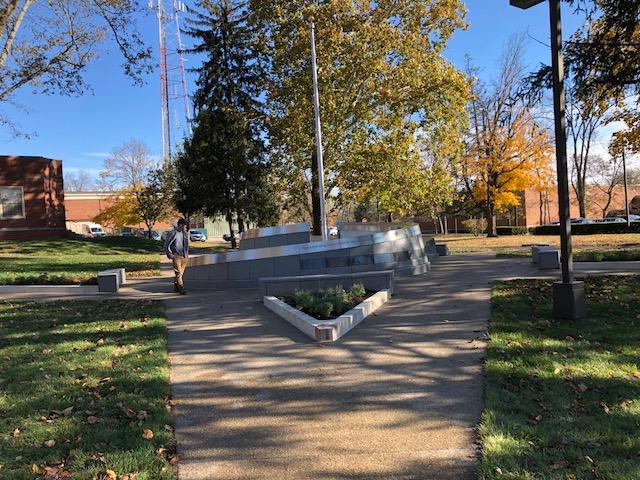 The memorial honoring Miami alumni who died in America’s wars, features spiraling walls within the five points of a star representing the five branches of the armed services. The memorial is between Wells Hall and the Campus Avenue Building. Photo by Rachel Berry

Miami will unveil a new spiral-shaped memorial Sunday, honoring 278 Miami University alumni who have died for their country.

Alumnus and veteran Dave Miller thought of the idea for the memorial five-and-a-half years ago, when Rowan Hall, the old naval ROTC building, was torn down to make way for Armstrong Student Center.

Miller, along with fellow veteran and alumnus David Lawrence, planned this tribute for anyone who has served in the military, even for a short while. They were later joined by a planning committee, which Miller said was pivotal in providing the perspective of all branches of the service and adding more input about the design for the tribute.

The Alumni Association partnered with Miller and Lawrence to help make this tribute a reality. Miller lives in California and Lawrence in Maine, so they needed people who are physically in Oxford to be involved with the project. They also wanted to make sure to include Miami throughout the entire process.

Ted Pickerill, Secretary to the Board of Trustees and Executive Assistant to the President, helped to connect the alumni to the president’s office.

“It is certainly something that is supported by the president and the university,” Pickerill said. “We wanted to make sure we could give whatever help was needed to make this a reality.”

The $600,000 project was fully funded by donors. Miller said they decided to fund it through alumni when they began, and knew they wanted donors to be individual private citizens rather than business groups.

Located between the Campus Avenue Building and Wells Hall on Miami University’s campus, the tribute contains the names of the 278 Miami alumni who were killed or missing in action from The Mexican American War through the Iraq War.

Students in the history department researched veterans who have attended Miami and helped to find the people’s names to put on the tribute part of the memorial. They also created a database of alumni who are veterans.

The oldest name on the monument is Lieutenant Daniel McLeary, who died on June 23, 1847, during the Mexican American War. 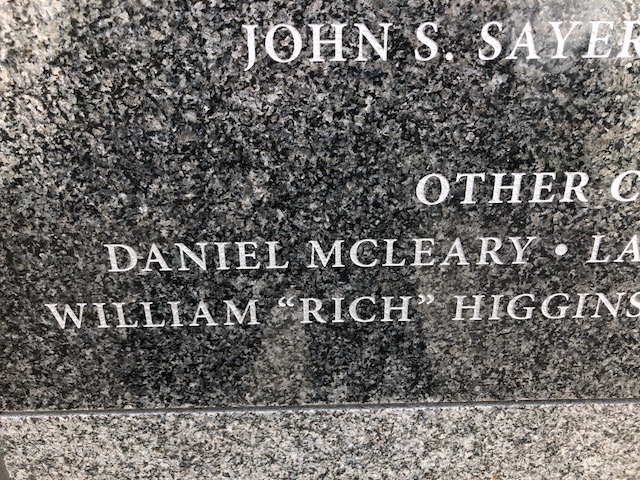 Daniel McLeary, killed July 23, 1847, during the Mexican American War, is the first known Miami alumnus to have died in service to his country. Photo by Rachel Berry 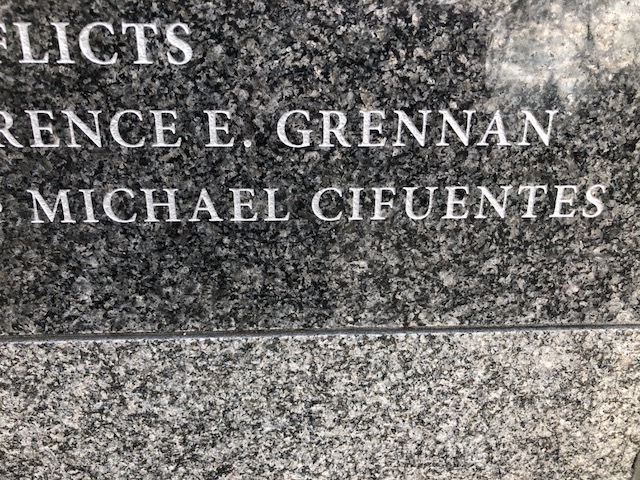 Michael Cifuentes, a psychology graduate in 2002, is the most recent Miami alumnus known to have died in service to his country, falling in Iraq on Aug. 3, 2005. Photo by Rachel Berry

The most recent death memorialized is Lance Corporal Michael Cifuentes, who died during the Iraq War, on Aug. 3, 2005. Cifuentes was a Marine and graduated from Miami in 2002 with a degree in psychology.

The names on the memorial will be updated each year, and research will continue to be done to find records of more service men and women who gave their lives for their country.

The Alumni Association prompted people to register if they served or know someone who has served. These people have joined the database created by the history classes, and now they have over 8,000 registered veterans.

They are still collecting names of veterans to add to the database and of servicemen and women killed or missing in action to put on the memorial. According to Senior Director of Development at Miami, Evan Lichtenstein, this database will be open forever.

Spiral for Reflection and Star for Services

The design was chosen by university architect emeritus Robert Keller, and many of the design decisions were based on his original plans.

The tribute is made of granite, cement, and stainless steel. The center contains two spirals which represent liberty and justice and wind inwards towards a flagpole. People can walk through the spirals and reflect on history and on the sacrifices these men and women have given for their country. 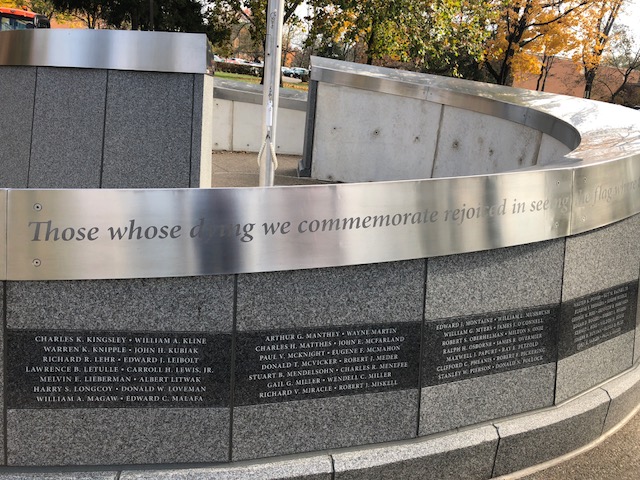 “Those whose dying we commemorate … ” The memorial carries the names of 278 Miami alumni who have died fighting in their country’s wars. Photo by Rachel Berry

“It will be a peaceful place where you can just relax and reflect on the number of people that have made our democracy and our country what it is today,” Miller said.

The metal cap of the wall contains inscriptions of the Bill of Rights, the military oaths of officers and enlisted personnel, the Pledge of Allegiance and the Preamble to the Constitution. There are also quotes by former U.S. Presidents Benjamin Harrison (Miami 1852), Woodrow Wilson, and Harry S. Truman, and from Gen. George S. Patton.

Around the tribute, a five-pointed star is formed, and in each point is the seal of one of the branches of the military.

The tribute sits next to the new Student Veteran Center in Wells Hall. This center is meant to give student veterans a place to communicate with others who have had similar experiences.

“Miami alumni have represented the United States in every battle since the Mexican American war, and unfortunately we’ve had casualties in every single one except for Afghanistan,” Lichtenstein said. “Miami and its alumni have done an amazing job of defending this country.”

There will be a dedication ceremony on Veterans’ Day, Sunday, Nov. 11, from 2-2:45 p.m. Miami President Gregory Crawford will speak along with Miller, Lawrence and Emma Wott, president of the student veterans’ association. The Miami men’s glee club will perform, and they will raise the flag on the flagpole in the center of the tribute for the first time.

The United States Marine Corps Communications Company, 14th Marine Regiment, 4th Marine Division of Cincinnati will fire a three-volley salute at the end of the ceremony.

“I’m just happy it’s finally coming to fruition after a thought five and a half years ago,” Miller said. “It’s been a long time in the making.”