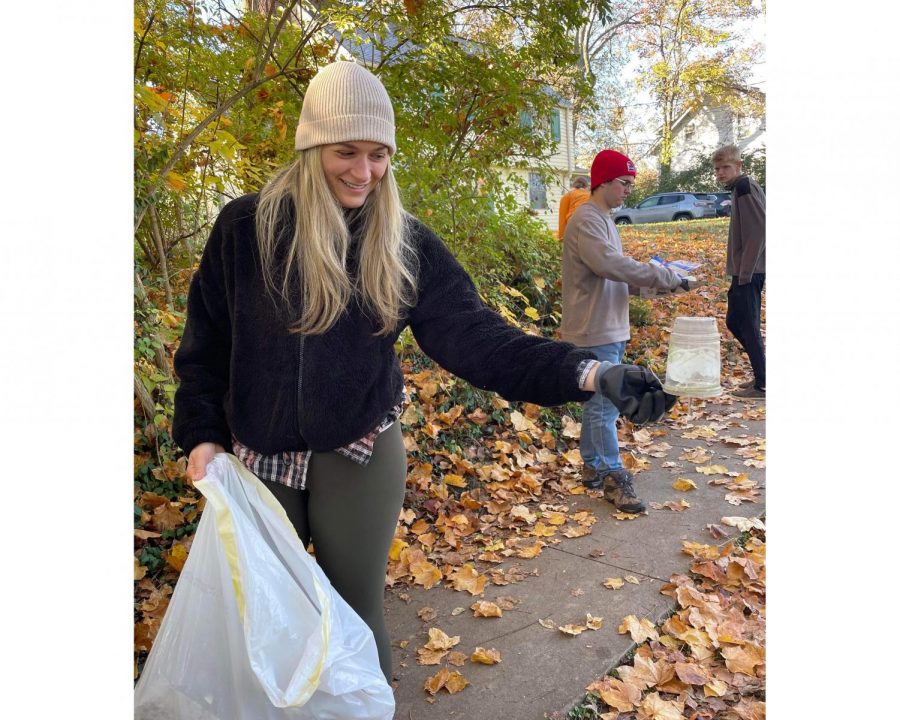 Sara Grieco picks up trash on East Church Street in Oxford. Thousands of pieces of trash are discarded on the streets of Oxford – paper, plastic and the ubiquitous aluminum can.

“The most beautiful campus that there ever was,” famed poet, Robert Frost, once said about Miami University. Today the phrase can be found scrawled across university marketing materials, attempting to draw students to the school.

Unfortunately, just a few steps away from campus, Carla Blackmar, an Oxford resident and employee in the Hefner Museum of Natural History at Miami, spends her commute picking up foam food containers, red solo cups, aluminum cans and masks every day.

Blackmar started picking up litter a few years ago after spotting the trash on her daily commute.

“At a certain point, I would pass the same literal pieces of trash every day,” Blackmar said. “And finally, I realized if I wasn’t going to pick it up, nobody would.”

She started recruiting others to help after realizing there was too much litter for one person to tackle. Modeled after the Australian “Take 3 for the Sea” campaign, Blackmar started an informal club online, “#Take3Oxford,” dedicated to picking up three pieces of trash each time you leave the house.

According to the U.S Environmental Protection Agency, “mismanaged trash,” or litter can cause environmental consequences, impacting humans, animals and natural habitats.

Ingestion of plastic by animals can cause many health issues, including choking and death. Litter also contributes to microplastics, tiny, broken-down pieces of plastic less than 5 mm in length. When trash and plastics are left in the street, they are broken down into small pieces that can make their way into waterways. Once in the waterways, they are then ingested by humans, fish and other animals.

Connie Malone, another local who grew up in the city, was inspired by Blackmar’s Take3 movement, invested in her own trash grabber and began picking up trash along her daily commute to Miami’s campus as well.

“When you begin to look and actively pick up the litter, it’s like you suddenly see it all,” Malone said.

Malone was awarded “Trash Picker of the Year” by the group in 2020 and has picked up over 75,000 pieces of trash since she started collecting.

“That’s just one woman in one tiny community,” she said.

This means while the city is responsible for cleaning city-owned property, residents are responsible for their properties as well as the sidewalks and grass strips adjacent to them. According to the law, this offense is punishable by a fine of up to $150.

Despite the law’s existence, Blackmar said the litter has to be pretty egregious before the city will take action.

“In my opinion, it has to be really bad, but it does happen,” she said.

Blackmar said the owners of rental properties, particularly the owners who don’t live in Oxford and therefore are unaffected by the litter, need to be held accountable for the trash on their properties.

“During certain times of the year like move-out, students place their trash on the curb but then they leave and aren’t coming back, so at that point, whatever happens, is whatever happens,” Blackmar said. “If it’s windy, raining or the trash falls over it’s really nobody’s job.”

Malone would also like to see more accountability placed on the landlords in Oxford.

“I would like to see them be encouraged to be responsible stewards of the property they own,” Malone said. “That means if the tenants aren’t cleaning up that they will.”

A Miami student organization, Zero Waste Oxford (ZWO), gets together every Saturday morning to clean the city, focusing on Mile Square.

The group recycles what they can and properly disposes of the rest, said Sara Grieco, a Miami senior and member of ZWO.

She said the group tends to focus on the southern portion of Mile Square, but has recently started venturing into the northern portion too.

The litter is usually more plentiful around the fraternity houses, with trash littering the curb, bushes and front yards of the houses.

“The most common litter is cans and bottles, which are luckily recyclable,” Grieco said. “As well as some non-recyclable items, like red Solo cups and food containers, which too often still have food in them.”

Miami University has a ‘Good Neighbor Policy,’ to hold students accountable for their behavior off-campus. Under this policy, students who receive citations for litter, noise and outdoor furniture violations from the city are also subject to disciplinary action through the university.

For this policy to have any effect, the city must first discipline litter offenders.

“Unfortunately, I do not imagine the large amount of litter being reduced unless there is some sort of punishment,” Grieco said.

Until the city starts to hold people accountable, Malone and Blackmar offer several ways people can contribute to Oxford’s cleanliness, including ensuring trash is properly contained before placing it on the curb for collection and investing in your own trash grabber to pick up trash along your daily commute.

Malone recommends bringing a bag, taking different routes to clean different spaces and separating the trash from the recyclables when you’re finished collecting.

“I hope people will lose the blindness and the idea that it’s someone else’s problem,” Malone said.