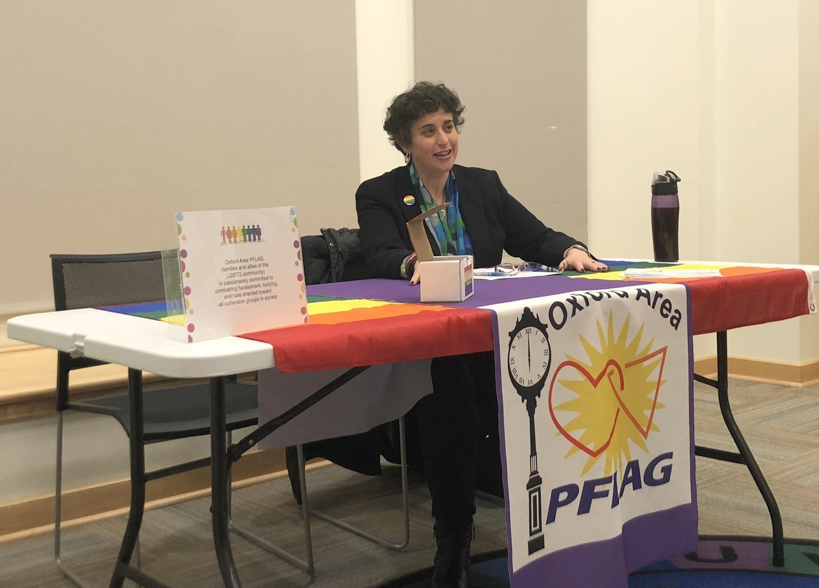 Amy Shaiman discusses her background in Judaism and the LGBTQ+ community at the Oxford Area PFLAG Community Meeting on Monday, Feb. 11. Photo by Leanne Stahulak

When the Oxford Area Parents and Families of Lesbians and Gays (PFLAG) met to talk about religious support for the LGBTQ+ community, one of the people they reached out to was Amy Shaiman.

Shaiman, a professor of Hebrew at Miami University with a Master of Arts in Hebrew Letters, is well-versed in Jewish theology.

“I am a woman serious in faith and serious in LGBTQ+ allyship. I deeply believe that all of us deserve to be treated with equality and respect,” Shaiman said. “It is my responsibility to educate about and advocate on behalf of those who do not have the privilege that I carry.”

The aim of PFLAG is to provide an educational space and support group for close family members of LGBTQ+ individuals. People who attend the meetings want to learn how to better support their children or family members by getting educated about the LGBTQ+ community. The organization hosted their community meeting on Monday, Feb. 11 at the Oxford Lane Library.

While the organization meets every month, each meeting revolves around a different topic. Shaiman spoke at the February meeting about the relationship between Judaism and the LGBTQ+ community.

“For me, staying involved in the [LGBTQ+] community has been largely about the people I love who are LGBTQ+,” Shaiman said.

Shaiman was born and raised in Minnesota into a devoted Jewish family. She identifies as a Reform Jew, which is a movement within the Jewish community that allows rabbis to decide individually how to interpret LGBTQ+ involvement in their congregation.

Eventually, Shaiman decided to further pursue her faith at the Hebrew Union College-Jewish Institute of Religion, in Cincinnati, where she graduated in 1996 with a Master of Arts in Hebrew Letters. But before attending graduate school, she first earned her undergraduate degree at Miami University in 1991.

“As a Miami student, I made the choice to talk about Judaism and learned to advocate for myself and what I believed in,” Shaiman said. After meeting several gay and lesbian students, she joined the Gay Lesbian Alliance (GLA) in 1990. “I got to be friends with lots of student leaders at that time and shared in advocating with them. I became more and more of an ally.”

While pursuing her graduate studies, Shaiman spent a lot of time studying the Torah. When she came to the scripture outlining that men shall not lie with other men as a woman lies with a man, Shaiman decided to interpret the text in a historical context.

“The Leviticus 18:22 text is in the context of a whole variety of difficult things that happen,” Shaiman said. She said she believes the text is more about preserving a sense of Jewish identity that is separate from the other communities around them rather than outlawing homosexuality as a whole.

Additionally, in Shaiman’s mind, modern practitioners of Judaism don’t necessarily follow every rule that is outlined in the Torah anyway. For example, she said that she and her husband choose to keep a Kosher household in terms of the food they eat, but not in terms of the clothes they wear.

“While I take the words of the Torah very, very, very seriously, there are a number of things that many Jews in modern society do a little differently than the literal text tells us,” Shaiman said. “We pick and choose. But it’s really hard when there’s picking and choosing in a way that’s hurtful [to others].”

Shaiman was the only religious representative to speak at the event this year, but last year four churches from the local Oxford community attended the PFLAG meeting.

“Last year it was a powerful time of sharing and storytelling and questions and answers and honesty and truth,” Bartel said. “I’m saddened that we missed it, but that’s our loss for not being part of the conversation. I would attend again.”

Bartel outlined a few points he would’ve made at the panel of faith communities.

“When someone who might identify as LGBTQ+ walks through our church door, we actively invite them to be a part of our faith community — in worship, in our mission, and in our community engagement,” Bartel said.

“I believe the good news from Jesus is for those who have been marginalized and those who have not experienced the love and justice of Jesus Christ. At the Presbyterian Church, we’re [thinking], ‘How can those on the margins be brought not only to the center but also to the table that Christ provides for all of us?’”

Despite their absence at this year’s panel, PFLAG member Diane Ruther-Vierling emphasized that Oxford’s churches do make an effort to be inclusive.

Ruther-Vierling has been involved in the Oxford Area PFLAG since it first resurfaced five years ago. Along with former president Linda Boardman, she helped expand the group and invited others to get involved. For her, it’s all about “trying to educate people.”

When Boardman became president in 2016, she helped initiate the Rainbow Reading Project, which aimed to supply the community schools with literature pertaining to the LGBTQ+ community. In recent months, PFLAG has expanded to include other groups as well.

“We do education advocacy and support for LGBTQ+ people, but also for marginalized people in general,” Boardman said. “We’ve kind of expanded out to all groups who are on the fringes and are looked down upon.”

“We’ve donated books to all of the Talawanda local schools — gender-identity books, but also [books about] self-awareness, immigrants and refugees,” Boardman said. “A whole bunch of different topics, but all on that theme of understanding diversity and understanding each other.”

Ann Wicks was actively pursuing this knowledge when she first joined PFLAG a year ago.

After Wicks learned that her grandchild was transgender, she immediately wanted to know “who to talk to and how to learn about it.”

Wicks was recommended to a member of the board for PFLAG and has been coming to meetings ever since.

“I’m learning how to be an ally and be supportive among all groups that I belong to,” Wicks said. “We had to have people who would talk with us and find out more ways to support our grandchild.”

The next Oxford Area PFLAG Community Meeting will be 6 p.m. Monday, March 11, at the Oxford Lane Library. The guest speaker for the evening will be Steve Large, Assistant VP for Health and Wellness in Student Affairs at Miami.