Former RedHawk now cheers on team from the sidelines 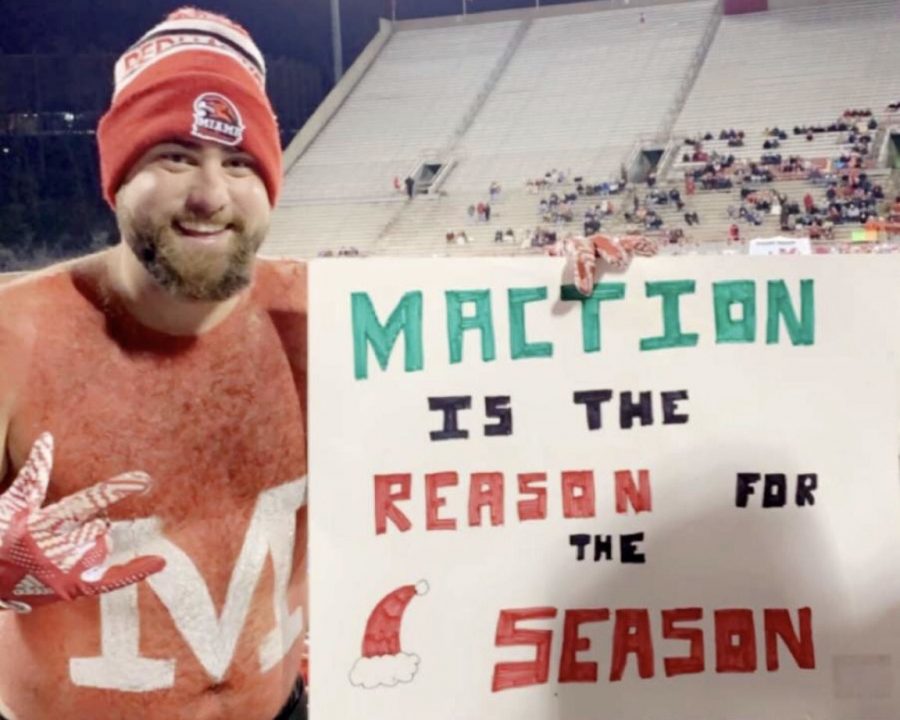 The idea for chest paint came during Rimko's junior year when the team was fighting for bowl eligibility. His friends challenged him to do it and he did it for the last game of the season, which the team won to become bowl eligible. He's done it ever since. Photo provided by Alex Rimko

Alex Rimko knew he wasn’t going to be able to play football again. Football was the reason that he first came to Miami University, but it wasn’t the reason he stayed here.

He was diagnosed with lung cancer in the winter of his sophomore year, but that hasn’t stopped him from supporting his teammates.

Rimko only has one lung. He has a sense of humor about it too.

“One of my favorite things about him is that it doesn’t come up in conversation often, but when it does, it’s completely out of the blue,” said senior Lauren Tjaden, who met Rimko through her boyfriend, Donovan White, who was Rimko’s roommate last year. “I had absolutely no idea that he had any type of cancer or surgery, until one night when we were all hanging out and he decided to tell me that he only had one lung. I totally thought he was kidding.”

The Avon, Ohio native first fell in love with Miami’s campus during a visit during his senior year of high school. When he got to campus as a freshman in the fall of 2016, he moved into McFarland Hall with many of the other freshmen linebackers on the football team.

“I was fortunate enough to live with the football team (freshman year) so I didn’t struggle making friends like freshmen usually do,” said Rimko. “I had 105 of them (friends) as soon as I got here.”

That season, the RedHawks became the first NCAA football team to start the season 0-6 and rattle off six straight wins to finish 6-6, becoming bowl eligible. Miami traveled to Florida for the St. Petersburg Bowl and lost to Mississippi State 17-16 at Tropicana Field.

“I had a blast. Football was the reason I came here. I loved every second of it and it didn’t end up the way I wanted it to, but I wouldn’t trade it for the world.” 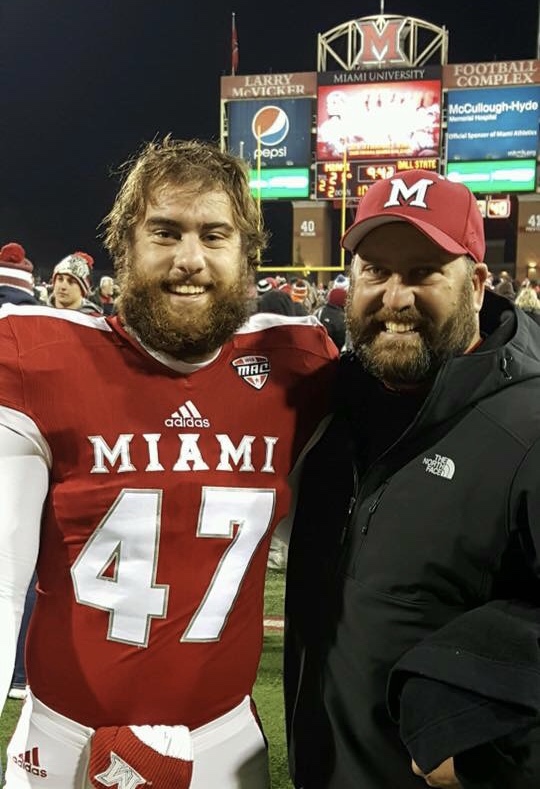 Rimko played one season with the RedHawks as a linebacker before transferring to Mercyhurst University in Erie, Pennsylvania. Photo provided by Alex Rimko

During spring workouts with the team, Rimko could feel he was a step behind the rest of the guys, which was unusual.

“In the spring, I was running around and always a step behind everybody, which wasn’t like it had been before,” said Rimko. “I was coughing and I kept going to the doctor, but they kept saying that I was good.”

In the summer, doctors decided to have Rimko undergo a minor surgery called a bronchoscopy to scope out what was going on. They found that there was an atypical carcinoid tumor and removed 98 percent of the tumor. They said that it would take five years to grow back, and that he would be able to continue to play football. Rimko transferred to Mercyhurst University in Erie, Pennsylvania, that fall in hopes of continuing his football career.

He played one season for the Lakers before his life changed.

After the season, in December, Rimko went to the doctor again to get checked out. This time, they told him that the tumor had grown back three times as fast and four times as large. They needed to remove his right lung. As a result, he had to stop playing the sport he loved.

“I was in shock and disbelief,” said former teammate and current Miami placekicker Sam Sloman. “You know it happens, but you never know it’s going to happen to someone you’re friends with and somebody you really care about.”

At first, Rimko didn’t think it was that serious.

“I think I kind of downplayed it because I didn’t realize how severe it was,” said Rimko. “The doctor said it was the best kind of cancer you can have.”

After a four-day hospital stay after the surgery, the recovery period lasted six weeks before he could start walking and jogging again. He didn’t need to do chemotherapy and radiation because the tests came back negative.

Through the adversity, Rimko stayed positive. This attitude was infectious and helped his friends and ex-teammates feel better about the situation. 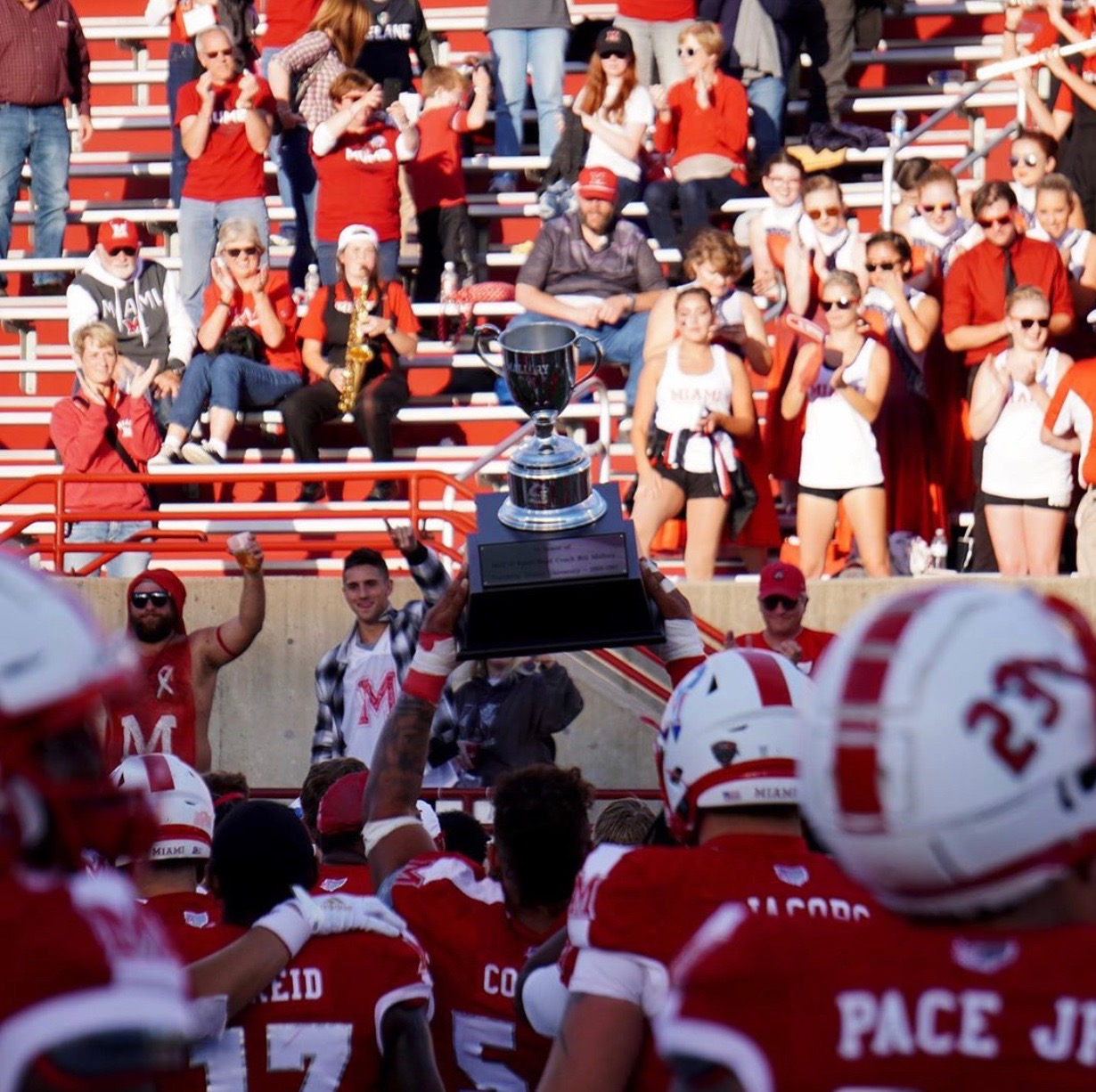 Although senior Alex Rimko can’t be on the field, he still supports his ex-teammates at every game. Photo provided by Alex Rimko

“He was in good spirits, it was like nothing skipped a beat when he came back,” said Sloman. “I think he handled it really well which made all of us feel more comfortable.”

Rimko transferred back to Miami in the spring of his sophomore year for multiple reasons, but the biggest was because of the support system he had on campus. He moved into Flower Hall, which was where the football team lived.

Now a senior, Rimko doesn’t have many restrictions. He doesn’t have as much lung capacity as he used to, which means he doesn’t exercise as much as he did when he played football. He doesn’t play intramurals regularly but has subbed for his friend’s baseball team a few times.

“It’s more of a precautionary thing,” said Rimko. “Everything I do I have to keep that in the back of my mind where like if you stress it too much something could happen, but nothing has.”

Rimko is a Sports Leadership and Management (SLAM) major, and is taking 15 credits this semester. He spends a lot of his time watching sports and playing Wii Sports and Mario Cart with his housemates, who are all on the football team. 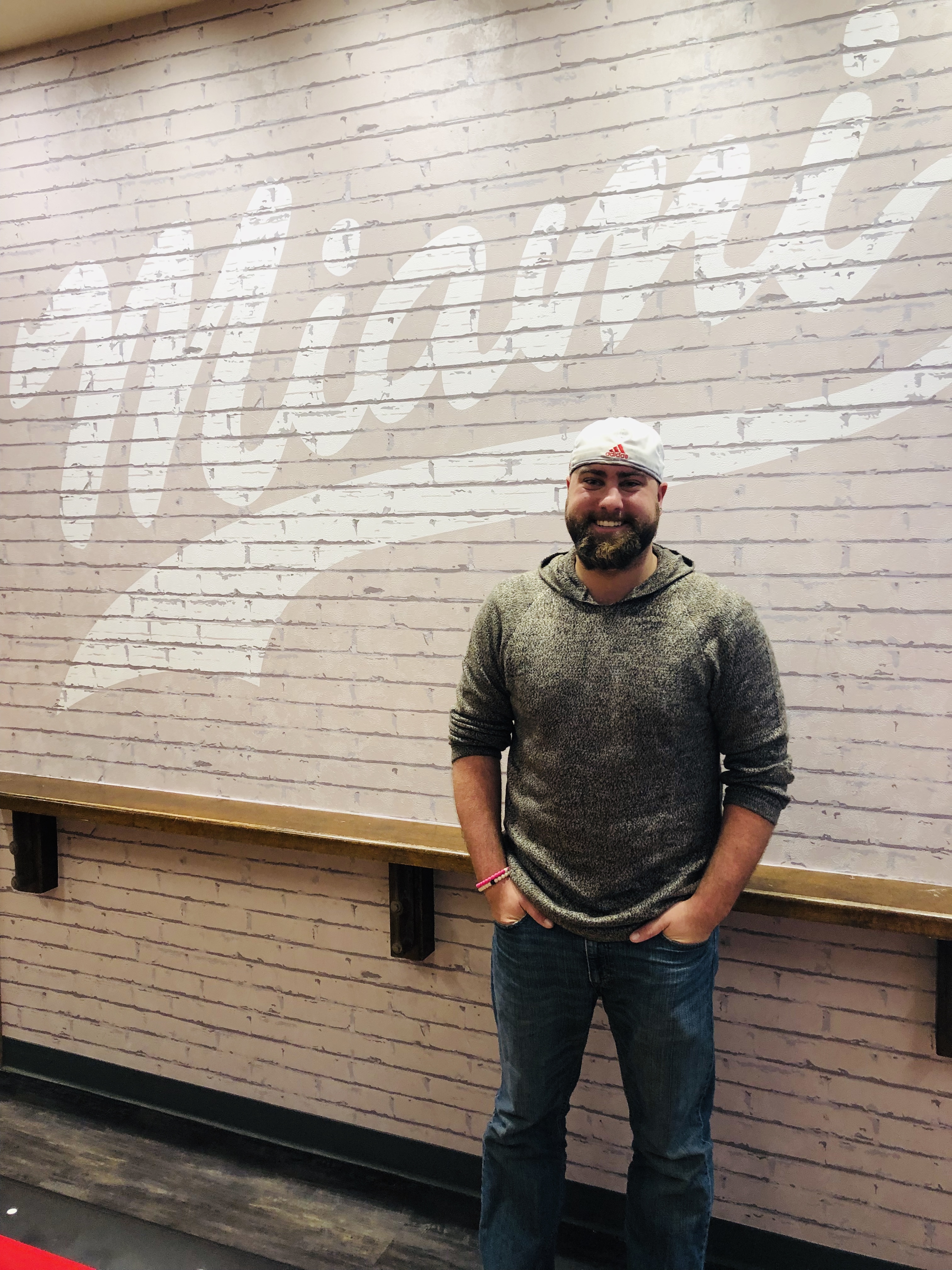 Rimko will be graduating in the spring with a major in Sport Leadership and Management. Photo provided by Alex Rimko

Supporting them and the rest of the team has been a big part of his experience here post-surgery. This season, he went to every game except for the Iowa and Kent State games and loved every second of it.

“I built that friendship with them before I even left, [so] now that I’m back, our relationship is stronger. I’m sitting there watching them play, and I get to live through their accomplishments,” said Rimko. “Like Sam Sloman, he’s kicking 53-yard field goals and I’m like ‘that’s my roommate!’ and I love it.”

Rimko can be seen in the student section of the stadium standing, yelling in support of Miami football, and with a chest full of red and white body paint. The idea for that started last season before the final game, which with a win, meant bowl eligibility.

“Last year I said that if they were going into the last game and they were bowl eligible, that I would paint my chest, because I was going to be there and it was supposed to be like six degrees,” said Rimko. “Everyone was like “oh you’ll never do it” and they were 5-6 going into the last game so I decided to do it. They went out there and won the game and were bowl eligible. Ever since I’ve just gone out there and done it for every game.”

Rimko has made the most of his experience at Miami. It hasn’t come without struggles and challenges, but he keeps a positive mindset through all the ups and downs. He spends a lot of time with former teammates and enjoys their successes just as much as if they were his own.

“I love to support them. I grew up with them,” said Rimko. “I came in with them and now I live through them.”

If you see Rimko around campus, you’ll see him wearing red and white Miami gear, with a hat on backwards and with a smile on his face.

“He’s the life of the party,” said Tjaden. “He’s one of those people that always has a smile on his face and always having a good time. Everybody needs a Rimko.”