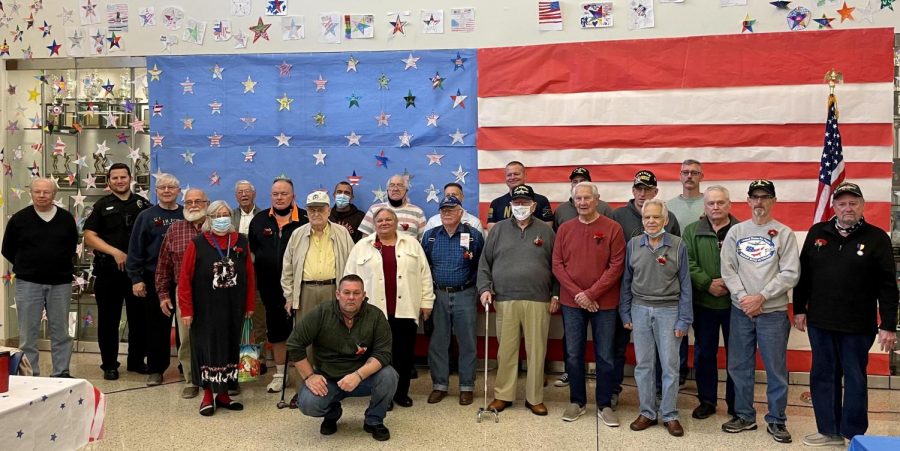 The 24 veterans who attended the breakfast are honored in front of a flag put together by FCCLA. The stars were made by elementary students throughout the district.

According to the U.S. Department of Veterans Affairs, only 240,329 of the 16 million Americans who served in World War II were alive in 2021.  Two of them attended the Talawanda High School Veterans Day Breakfast and Ceremony Thursday morning.

Richard Coombs served in the Army during World War II in Germany, France and Denmark.

Marvin Sizemore served in the Navy from 1940 to 1949 in the Pacific. During that time, he was held as a prisoner of war for three and a half years. His wife, Helen Sizemore, joined him at the breakfast, and they were able to see their great granddaughter, who is a student at THS. The Sizemores now live in Hamilton, but Marvin is a former Oxford Police officer. He retired in 1980.

“We have fought through all sorts of things and those that have suffered the biggest burden are those men and women who have worn the uniform,” U.S. Rep. Warren Davidson, (R-OH), told those attending the breakfast.

Davidson enlisted in the United States Army’s 3rd Infantry right out of high school and later attended the United States Military Academy at West Point. He then served in The Old Guard, the 75th Ranger Regiment, and the 101st Airborne Division. He represents Ohio’s 8th Congressional District, which includes Oxford.

He spoke of his time in the Army, including the fact that he was in Germany when the Berlin Wall fell on Nov. 8, 1989. Davidson said he hopes that many of the students in attendance at the breakfast would be inspired by the veterans present to serve their country one day, even if that service is not in the military.

In most years, this annual event is attended by the entire THS student body, but this year it was live streamed to each class due to coronavirus precautions. The only students in attendance were those serving the veterans and their families from the Butler Tech and THS chapter of Family Career and Community Leaders of America (FCCLA).

“You can see how our caring impacts the veterans and how they impact us. We can see perspectives from different generations and how the different veterans were impacted by their service,” said senior Kaylee Burgess. “Being able to be here and personally connect with them is awesome. It’s really inspirational seeing everyone interact.”

FCCLA Advisor Sharon Gregory announced that the Talawanda School District will continue to honor veterans by creating a wall of veterans who are THS graduates. The construction of the wall will begin soon and will be in the main entrance of the high school.

This project is being partially funded by a $1,000 grant from Butler Rural Electric Cooperative Inc., but still needs more funding to be able to finish the project. Gregory is working on reaching out to various people and organizations around the district to obtain the necessary funding.

Anyone interested in donating to this project, or who is a THS grad and veteran should contact Gregory by emailing her at [email protected], or by calling 513-273-3164.

An hour after the breakfast, the Oxford Parks and Recreation Department (OPRD) hosted an 11 a.m. Veterans Day Ceremony uptown in Memorial Park.

The event began with Miami University’s Naval ROTC posting the colors. The flags were provided by the Rotary Club of Oxford. The Bel Canto Choir of Talawanda Middle School sang the Star Spangled Banner, then the OPRD Learning Blocks Preschool led the audience in the Pledge of Allegiance.

Several speeches were given, including by Oxford Mayor Mike Smith. He spoke about several notable veterans of the Oxford area, including his seventh great grandfather, who fought in the Continental Army before settling in Oxford.

Near the conclusion of the ceremony, TMS Resource Officer and veteran Pete Durkin presented a wreath. Around 20 attendees placed red carnations on the wreath in honor of veterans who have died, either in combat or later in life. Each person who placed a carnation first went up to the podium to dedicate that carnation in front of the crowd.

White carnations could be taken to be given to a veteran who is still alive to thank him or her for their service.

“If you eat today, thank a farmer. If the food is on your table, thank a trucker. If you ate in peace, thank a veteran,” OPRD Director Casey Wooddell said to close the ceremony. Veterans Day is celebrated on Nov. 11 each year, which marks the end of World War I in 1918. The armistice ending that “Great War,” occurred at the 11th hour on the 11th day in the 11th month. Frank Buckles, the last United States veteran of the First World War, died Feb. 27, 2011.