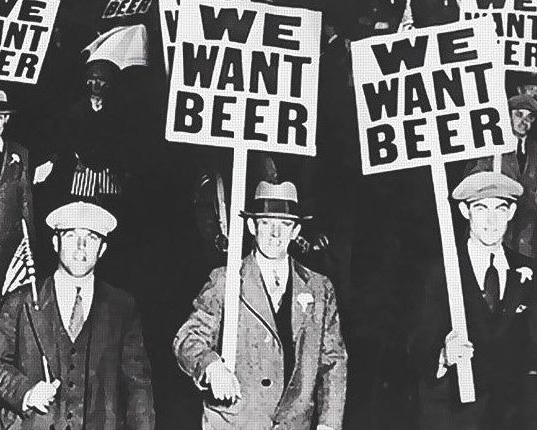 Photo provided by the Pickle and Pig

A vintage photo of a protest against prohibition adorns the menu at the Pickle and Pig.

The new eatery officially opens on Nov. 9, with the two weeks leading into it being a “soft opening” period to perfect the training of the bootleggers (staff), said Dave Hornak, director of operations and one of four co-owners. Pickle and Pig is attached to the Elms Hotel, 77. S. Main St., with the entrance being to the immediate right of the hotel’s entrance. It will be open 4 p.m. to 10 p.m., Sunday, Tuesday, Wednesday, and Thursday and 4 p.m. to 1 a.m. on Friday and Saturday

Hornak said the four owners collectively own several pieces of real estate, including Stewart Square off of West Spring Street and the Elms Hotel. They wanted to utilize the extra space attached to the hotel in a way that would enhance profit and not rob any business from Gaslight, at 325 S. College Ave.

To Hornak, the Pickle and Pig is a passion project. Being a massive history buff, the establishment gives him an opportunity to bring something new and unique to Oxford. Luckily, the structure of the building lends the perfect space for a hidden ambiance.

“As soon as I saw the bones of this place I knew it was made to be a prohibition eatery,” said Hornak.

The origins of the name, Pickle and Pig, come from a mix of history and what the restaurant has to offer. The owners threw the names of all of the things they believe are important to the restaurant up on a board such as bourbon, pickles, blind pigs, etc. Hornak explained that a “blind pig” was another name for speakeasies during the 1920’s-1930’s, as well as a nickname for police officers who turned a blind eye to the illicit bars.

At first the name, “The Pickle and Fig,” was tossed around, then “The Pickle and Blind Pig,” until finally “The Pickle and Pig” stuck with management. Patrons can catch bits and pieces of the name throughout their dining experience. Once seated, customers will be served with a starter jar of house-made pickles.

Hornak recently added a signature “pickle & pig” appetizer, which encompasses a smoked pork belly, sweet and spicy dill chips and a bourbon pepper drizzle. For every pickle and pig they sell the restaurant will donate a dollar to Luna Cares, which assists women with the financial burden of a cancer diagnosis. This donation program is similar to the burger of the month at Gaslight, which also donates money to Luna Cares.

The menu itself is reminiscent of a ’20s newspaper with unique course headings. Anyone wishing to order an appetizer should look under the “Prologue” and those wanting a sandwich for their entrée should look to the “Short Stories” section.

Hornak says that crafting the menu was one of his favorite things to do in regards to creating the establishment. With 27 items on the menu, there is a lot of adaptability and room for expansion.

“The menu is very immigrant and southern-inspired. Since the early 1900’s were a big time for immigration, New York speakeasies had a lot of French and Italian influence when it came to “flavors” he said.

One key player on the menu is the Hot Caesar & the Hen ($14). The Hot Caesar is unique in the way the salad dressing is first sauteed in olive oil and then drizzled over cold fresh greens. It is topped off with baked chicken, pork belly and shaved Parmigiano-Reggiano.

Another noteworthy dish is The Seafarers Journey ($28). It consists of bucatini pasta with shrimp, sea scallops, little neck clams and andouille sausage all tossed in a classic arrabbiata sauce.

Two desserts come straight from the time period. One is The Crachet Family Pudding ($9), which is the signature library-made bread pudding with a “bootleggered” custard, served warm with a scoop of homemade vanilla bean ice cream and drizzled with bourbon vanilla cream sauce right at the table. The other is the Lemon Icebox Cake ($8), consisting of a classic lemon cream pie with a graham cracker crust, layers of lemon custard and whipped cream.

Recent diner Kristen Perez described the experience as just what one might expect when dining in an old prohibition eatery.

“It looked just like a speakeasy, including dim lighting, candles and the staff playing as bootleggers. It’s very much a theatrical experience,” said Perez.

Perez was impressed by the friendliness of the staff, as well as the speed that her group of five people received their food. She explained that there is a hidden lounge behind a swinging bookshelf where guests can have a more intimate dining experience. To leave the lounge, diners must exit through “Bootlegger alley,” a hall that leads back to the main bar area.

The décor of The Pickle and Pig features Edison-bulb light fixtures, antique wall telephones, vintage books lining the bar room and taxidermied animals. The secret lounge walls are lined with newspapers from The Miami Student that date all the way back to 1929.

Miami University marketing major Ryan Napier believes this will appeal to the student population because it is so different. He notes that Uptown seems to cater more so to the Miami student population in the age 18-22 demographic.

“Marketing for this restaurant could involve advertisements with an ‘old-timey’ feel or having events that align with prohibition-era themes or characters. This will invite those who are in college and still in town to come see what the event is or invite the Oxford townspeople to join in a prohibition-style meal or drink” said Napier.

Hornak also hopes this idea will draw a wide crowd that doesn’t necessarily just consist of college students. The restaurant includes a children’s menu to make it family-friendly, but emanates an upper-scale dining feel to attract an older crowd.