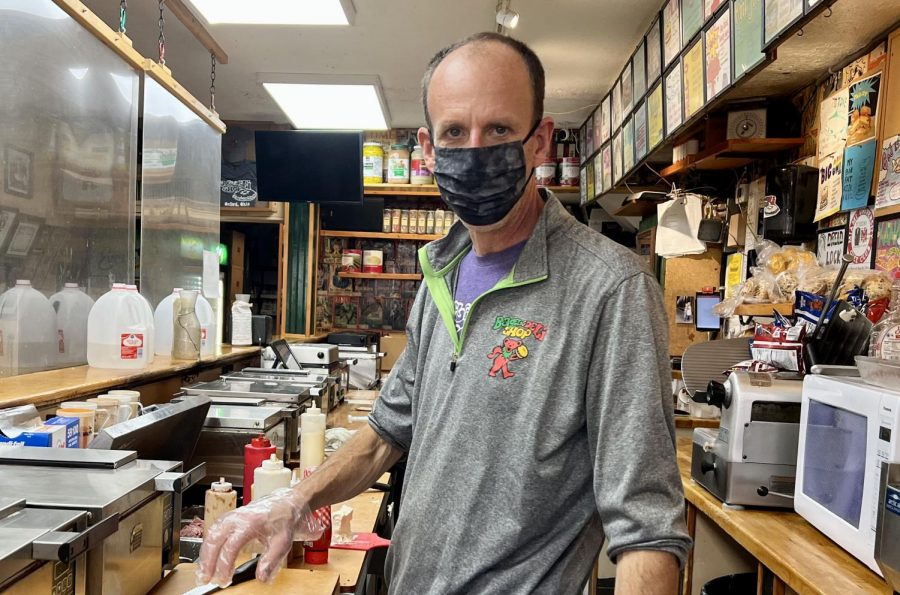 Gary Franks, co-owner of Bagel & Deli, says he has been dealing with supply shortages for more than a year.

Never before has Gary Franks experienced a supply shortage as crippling as right now. Franks is a co-owner of Bagel & Deli, 119 E High St., and said that his shop has been facing supply problems for more than a year.

“It’s an interesting time to be in business because, typically, you can get whatever you want whenever you need, and now, there are things you just can’t get. You can’t get certain flavors of Gatorade or certain flavors of chips for weeks,” he said.

As demand from consumers climbs, people face empty shelves in the grocery stores as everything from toilet paper to turkeys to LEGOs experiences supply issues.

According to experts, this disruption is of an unprecedented magnitude. “There are always ripples in the supply chain, caused by natural disasters or worker strikes, but those only affect part of the chain. We’ve never had anything that affected everything before,” said Lisa Ellram, a Miami University Distinguished Professor of Supply Chain Management at the Farmer School of Business. “It was probably World War II that we last saw shortages of this scale in America.”

Ellram said the main cause of the shortages is the pandemic. “When so many businesses were shut down and couldn’t operate, you had factories that couldn’t make anything, and suppliers who couldn’t make inputs. Consumer demand was really low at first, but then people started buying things again and we got behind right away from that.”

As the pandemic continued, many people who went back to work contracted the virus or had to be quarantined, and some chose not to return to work at all. “We just got further and further behind,” Ellram said.

From a demand and production standpoint, she said the timing of the pandemic was even worse because it coincided with the Chinese New Year, when factories in China shut down for up to a month. “When they normally would have started up again, the pandemic had shut things down,” Ellram said, “and so we were hurt because of that too.”

For Franks, ordering products has become more tedious than normal. “It used to be only once every few weeks where one vendor might be out, but every time I order, someone is out of something,” said Franks. “It makes the process of ordering our supplies extremely difficult if somebody is always out of stock.”

Franks said he sometimes is forced to look elsewhere in order to get anything at all. “There’s certain brands we like to use, and you can’t always get them. For example, there’s a specific brand of corned beef that I really like, and I could hardly get it, so I had to switch it for another brand that wasn’t as good,” he said.

To compensate, he has resorted to ordering in bulk whenever supplies are available. “I know that exacerbates the problem, especially since everyone is doing the same thing, but you don’t want to run out of key things,” Franks said. “If everyone is short on turkey, and I can get it from a supplier, I might double what I order.”

Chance Ledford, a night manager at Bodega, 11 W High St., said the restaurant has encountered similar problems. “I can’t think of a time when there was a similar shortage,” he said, “which means I’ve definitely had to change the way I operate financially to keep things afloat.”

The experience has been nerve-wracking. “We have to swap products a lot, and it’s kind of playing a little game of ‘what’s similar?’ and going on a scavenger hunt,” Ledford said. “If I can’t get romaine lettuce, I’ll switch to mixed greens. Sometimes we even go down to Kroger and hope they have it there.”

Ledford also said he sometimes doesn’t know about a shortage until his order is unloaded from the delivery truck. “Suddenly, they’ll tell us they don’t have lettuce. And if the truck shows up kind of late, we’ve already opened up and then they’re telling us something we were hoping for like bread or cheese hasn’t arrived.”

The shortages have gotten worse as the year has worn on, Ledford said. “Bodega was closed for a little bit, and when we opened up in August, it was much more noticeable. We actually got a new menu when we opened, an alternate menu of sorts. We had to raise our prices a little bit and take some things off, like pretzel buns, just because the cost of them has become too high.”

Ledford said customers have mostly been understanding about the shortages. “People definitely get bummed if we don’t have certain things, like the pretzel buns for example, but then I just explain it’s too expensive for me to keep ordering it, and they usually get it.”

Beyond a lack of supplies, these shortages are reinforced by a dwindling labor pool. “Demand for most things has been very strong, and we’ve never really gotten the workforce back in full force so we continue to remain behind,” said Ellram. “And then when one thing goes wrong in the supply chain, we don’t have any sort of backup for that. We don’t have a buffer. So, it just ripples through the whole chain.”

Franks said his delivery services have been cut down to once a week due to a shortage of truck drivers. “I need to get everything in one big load rather than see how the week goes and just top stuff off at the end,” he said. “Sometimes, vendors don’t have truck drivers at all, and so my order comes late. It’s frustrating because even when we can get the product, they don’t have anyone to bring the product to us.”

For the Talawanda School District, both supply shortages and the labor problem have caused significant challenges. Earlier in October, the middle school failed to receive all its milk supplies. “This is due to staffing shortages at the plant and with drivers,” read an email sent to Talawanda parents.

Other times, drivers are present but actual food supplies are out of stock. Talawanda superintendent Ed Theroux said in this case, menus have to be changed on short notice.

“This has been difficult for students, parents and our workers,” said Theroux. “Some students plan on eating a certain lunch but find out when they come to school the menu has been changed. Some don’t like the change, but it’s too late to bring lunch from home.”

Theroux said with extra efforts from staff, he hopes students don’t see or feel all of the issues at hand. “When the milk shortage occurred, the food service workers scrambled to find alternative beverages, such as fruit juices,” he said. “Our staff work really hard to plan healthy and nutritious meals, and substituting items adds stress and time to ensure these meals are available.”

Theroux added that most families have been understanding about the shortages. However, he said that he doesn’t see the shortages going away soon. In the meantime, “…Talawanda will continue to problem-solve creatively,” he said.

In terms of predicting which sectors will next be at risk of shortages, Ellram said experts have a “terrible” track record. “The demand for electronics dropped at the start of COVID-19, and the electronics sector gave a horrible forecast for the rest of 2020. And then you know what happened? Demand went through the roof,” she said.

In terms of current products, Ellram said that seasonal decorations are extremely hard to restock. “I was by Walmart last weekend, and I have to say they had a terrible supply of Halloween decorations,” she said. “I don’t know if they restocked or not because it’s taking around 73 days to get something from China to the U.S., and it used to be only about 40.”

Another significant, more permanent shortage are computer chips. According to Ellram, demand is way higher than supply for these chips. “We demand a lot more electronics, and cars have started using a lot more chips, so it’s a combination of things,” she said. “If you’re thinking about Christmas, and you want anything with electronic components, and you happen to see it available, you might want to buy it now,” she said.

For consumers dealing with frustrations, Ellram urges patience. “I don’t want to hurt anyone’s feelings by saying this, but we’re really kind of spoiled. We’ve gotten used to having things right away when we want them.”

She added that consumers should also try to prioritize their wish list. “It’s probably a really good time to step back before you buy something and say, ‘Do I really need this?’ Instead of buying something you kind of like because you can get it, you should wait and buy something you can have longer, like a high quality coat you’re willing to wear all throughout college. And it’s easy for me to say, but really try to keep perspective: If there’s something you want and it’s out of stock, is it really the end of the world?”

However, Ellram also recognizes that some people in need of cars for transportation or who seek other essentials might not be able to wait. Unfortunately, she said current estimates from importing ports predict that the shortages could last until 2022 or even 2023.

“A really important thing is going to be for the spread of COVID to just stop,” Ellram said. “People getting sick and missing work because of it is just making the disruption worse. It creates a bottleneck, and it’s kind of like a whack-a-mole; you fix one problem and another problem pops up here, another problem pops up there.” With some global COVID hotspots still in existence, it’s difficult to revive the entire economy.

Ellram also said that the issue is so complex that centralized government policy likely won’t be enough to solve the problem.

“When Biden issued the 24/7 port opening, the problem was that there’s just not enough people to work in the ports,” she said. “You need some specialized, skilled people who can run the cranes, who do the unloading, you need certain types of equipment to pick up the containers. The constraints are so complex it’s very difficult to have a central body come in and do a little fix because whatever they do is going to set something off somewhere else.”