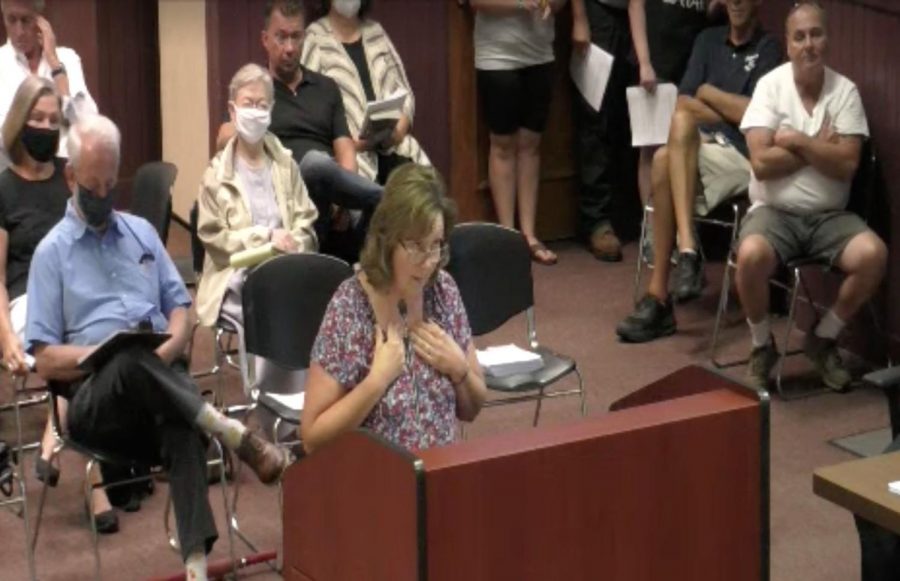 Oxford resident Dana Dunagan questioned the wisdom of getting vaccinated or wearing face masks at the Aug. 17 meeting of Oxford City Council.

At the Aug. 16 meeting of the Talawanda Board of Education, a man who identified himself as Dr. Sean Brooks declared that everyone who has received an mRNA vaccine against COVID-19 will die within the next five years.

Brooks said he has a doctorate degree, has studied health medicine and anatomy for 21 years, and has published 23 books. He also made false claims that people who have been vaccinated for COVID-19 are now sterile, suffering from blood clotting, and have dramatically decreased immune systems.

A day later, Oxford resident Dana Dunagan spoke against COVID-19 mandates at an Oxford City Council meeting. “This vaccine has not been out there very long, so I applaud the people with wisdom who are saying, ‘I’m gonna wait and see’” she said. “I don’t want to put something in my body when I don’t know what will happen.”

Dunagan added that she is a licensed physical therapist in Ohio, and that during training, she was taught protective equipment such as masks are more for one’s own safety than for others. “I would implore you: please don’t take away my freedom,” she said.

Brooks’ claims about the vaccine are false — there have been no mass death reports connected to vaccination rates, experts assure infertility isn’t a side effect of the vaccine, the mRNA vaccine has not been linked to blood clotting, and vaccines work to improve the body’s immune system, not tear it down.

Efforts to reach Brooks for comment on this story were unsuccessful. Although he claimed to be from Oxford, he is not listed as a member of Miami University’s faculty and no local address could be found for him.

Dunagan may have personal reasons for caution, but experts have proven through rigorous testing and clinical trials that mRNA vaccines are safe. These vaccines instruct cells to produce a harmless piece of spike protein from the coronavirus, which then will trigger an immune response that teaches the body how to prevent future infection. Though mRNA vaccines are newly available to the public, researchers have already studied them for decades for diseases such as flu, Zika, and rabies.

Though the inaccuracies in Dunagan’s comments were less egregious than in Brooks’, both contain misrepresentation of the scientific information provided by medical experts. Throughout the pandemic, many Americans have shunned expert advice, preferring to follow alternate sources or do their own research instead.

In Ohio, only about 55% of the population has received at least one dose of the COVID-19 vaccine despite encouragement from Centers for Disease Control and Prevention experts and elected officials. Beyond the coronavirus, hot debate continues in other areas of science, from climate change to whether or not vaccination causes autism.

“It’s both a psychologically interesting time and a little bit scary about how far some of this misinformation has gone into the national conversation,” said Christopher Wolfe, director of graduate studies in psychology at Miami University.

According to Wolfe, there are a variety of factors as to why people might believe misinformation. “One thing is that so many of us are not getting our news from the same sources anymore,” he said. “Certainly, through the Internet, people tend to get news from sources that fit their general worldview, and algorithms maximize engagement as opposed to accuracy.”

In this way, things that might appear bizarre to one group of people might make sense to another. Wolfe also said that people who believe in misinformation may just want to understand news in a manner they find agreeable. “People like to connect the dots and inhabit a world that makes sense to them,” he said.   Sometimes, these conspiracy theories help people feel like things are fitting together and making sense.”

From a psychological standpoint, human beings don’t necessarily have to believe conspiracies for them to have influence; sometimes, the sensationalized nature of these claims cause them to be appealing, even if there is no concrete evidence.

A third reason, Wolfe said, is domain-specific knowledge from the standpoint of cognitive psychology. This helps explain why some educated adults and even healthcare professionals may believe false information.

“You could have a very reasonable scientific understanding about, for example, things in your garden and what makes plants grow, but still have misconceptions about global warming or how greenhouse gases work,” he said. “There are certain places where we have blinders on for what our own weaknesses are.”

Convincing someone of the right facts takes dialogue, patience, and listening. “People don’t like somebody just talking down to them or telling them that they’re idiots,” said Wolfe. “If you know the facts, it’s easy to get frustrated at people who don’t, but it’s counterproductive to dialogue.”

The internet environment only makes it hard for these civil conversations to be held. “A group of scientists at Georgetown University did research with online trolls and vaccination content and found half their stuff was actually considered pro-vaccine,” he said. However, this content dismissed the fears of parents who had concerns about vaccines instead of actually addressing and assuring them.

“Online, you also have to be willing to call people out and say ‘I don’t think that’s true’ or ask them for a source,” Wolfe added. “But that’s not that fun. People go to the internet for fun. If you want likes and happy emojis and I’m confronting you about the accuracy of your information, it’s hard to do that with a positive spirit.”

In real life, Wolfe said that we can each try to combat misinformation by logically speaking to someone who believes something false. “There’s misinformation that all the people who are hospitalized with COVID-19 are really hospitalized from bad side effects of the vaccine. And that’s just not true. It wouldn’t take that much work just to show somebody evidence otherwise, but it takes some positive conversation and that’s something we don’t have a lot of patience for right now.”

He stressed that just throwing out facts wouldn’t prove to be an effective communication strategy. Rather, active dialogue would be the most useful course of action.

Wolfe also said that early education in elementary school about scientific thinking and recognizing facts could be useful for the next generation. “I think that it would be helpful both in terms of teaching kids to be media savvy and to have scientific literacy,” he said.

Barbara Hamilton, a fourth grade teacher at Kramer Elementary School, is working to instill these abilities in her students.

In all areas, Hamilton said focus is placed on inquiry learning. “I try to do a lot of hands-on experiments with the kids,” she said. “Sometimes, I build my own experiments. We typically do group experiments. They work in groups of four, because we talk a lot about how scientists collaborate.”

The experiments are usually designed so that students can come to the correct conclusion while still working to form their own ideas.

“When I look at how much science misinformation is out there,” Hamilton said, “I’m working really hard this year, more so than in past years, to talk with my kids about the scientific method. We did a whole lesson upfront on, first of all, what is science? What is the importance of evidence? What do we already know from prior work from other scientists? What’s the scientific method? Every time we do an experiment, we walk through those steps.”

However, she said that there hasn’t been much talk about COVID-19 in her classroom. “I expected my kids to talk a lot more about COVID,” she said. “I especially expected to hear some of the misinformation going around, and I really haven’t.”

Though one of her students has contracted COVID and a few others have been quarantined, she said most are used to COVID as the new normal.

“We have also had some conversations about other current topics that may have misinformation, like climate,” she added. Though she expected to hear some form of misconceptions from her students, she said she hasn’t.

“I think my fourth graders are still pretty sheltered from current event news or more adult conversations,” she said.

Hamilton’s takeaway from teaching her students is that she wants them to exit fourth grade understanding two main things: The power of curiosity and the importance of evidence. She hopes that they’ll be able to apply these to all areas of life.

As topics such as vaccination and climate change become more hotly debated, Hamilton said that she isn’t sure whether or not they’ll make it into the elementary curriculum. “My suspicion is that the lower grade levels will probably steer clear of those bigger issues,” she said. “The goal we have will continue to be building a foundational understanding of science in kids.”