20 Rooms Flooded in Newly Renovated Dorm Are Still Not Fixed 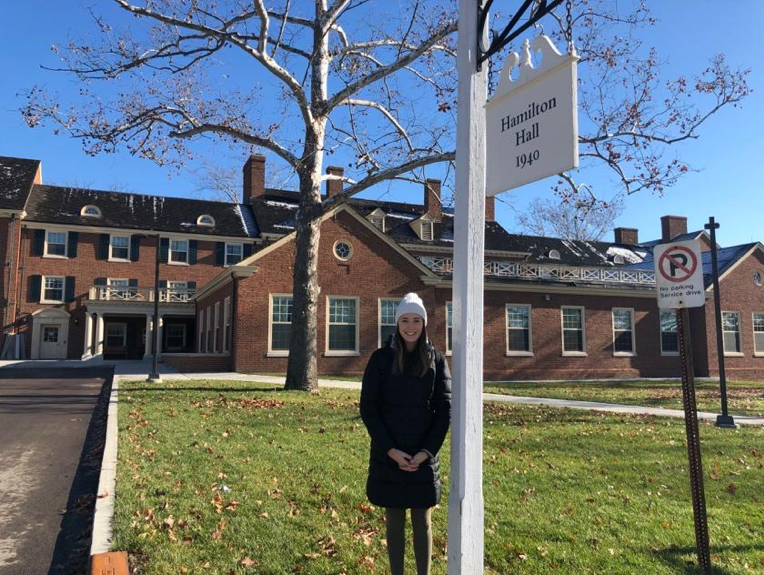 “I was sitting in the car on the way back to school and had no idea if my stuff was ruined or not,” said student Lauren Walter, seen here in front of Hamilton Hall. Photo by Emily Goliver

A pipe burst in the ceiling of recently remodeled Hamilton Hall at Miami University over Thanksgiving break, rendering 20 student rooms uninhabitable until at least the beginning of next semester.

Connie McCarthy, the associate director of capital projects at Miami, said that the break was caused by a chilled water valve failure. The water damaged portions of the ceiling and caused some areas to collapse.

“Approximately 20 student rooms and adjacent areas in the northeast wing of the building have been rendered unusable, with additional damage to bedding, clothing and other items in the affected rooms,” McCarthy said in an email.

Hamilton Hall, on Oak Street, was built in 1940 and renovated in 2016. It was the first sorority dorm to feature suites. The hall re-opened in August 2017.

According to McCarthy, the dorm renovations cost over $18 million. The university is hoping that the burst pipe is a warranty issue and will have no additional cost.

As for the students affected, the University secured alternate housing in residence halls around campus and is helping them navigate the claims recovery process for their damaged items. University officials said it is hoped the affected students will be able to return to Hamilton by the beginning of spring semester. at the end of January.

The resident director for Hamilton Hall sent out the insurance claims forms within hours of the first report of damage.

Lauren Walter is a sophomore living in Hamilton Hall. Her room was spared from any water damage, but a room a few doors down from her was completely damaged.

“I have a friend whose laptop was damaged,” Walter said. “They gave her a loaner but with finals being in a few days, it was just really unfortunate timing.”

Vicka Bell-Robinson, the Director of Residence Life at Miami said they had hoped that once they cleaned up the water and there wouldn’t be much damage. But after investigations by the health and safety team and physical facilities workers, they determined there needed to be extensive repairs.

Because Hamilton Hall is a newly renovated dorms, it is also one of the most expensive to live in Students who were moved out of their rooms into the less-expensive dorms due to the water damage will be refunded a portion of the room and board fee that they paid at the beginning of the semester.

Bell-Robinson said that there was no warning that there would be any issues prior to the valve failure.

“If there was any indication that something like this was going to happen we would have tried to prevent it,” Bell-Robinson said.

It is unclear how expensive the damage will end up being. When the third-floor ceiling collapsed, water flooded into rooms on the second and third floor. Electrical damage was caused when water got into the light fixtures. The damage only impacted one section of the building.

“I found out about it from our sorority group chat,” said Walter, who is a member of Zeta Tau Alpha. “None of us really knew what was going on or who was affected. It was actually really stressful because I had no idea what I was coming back to.”