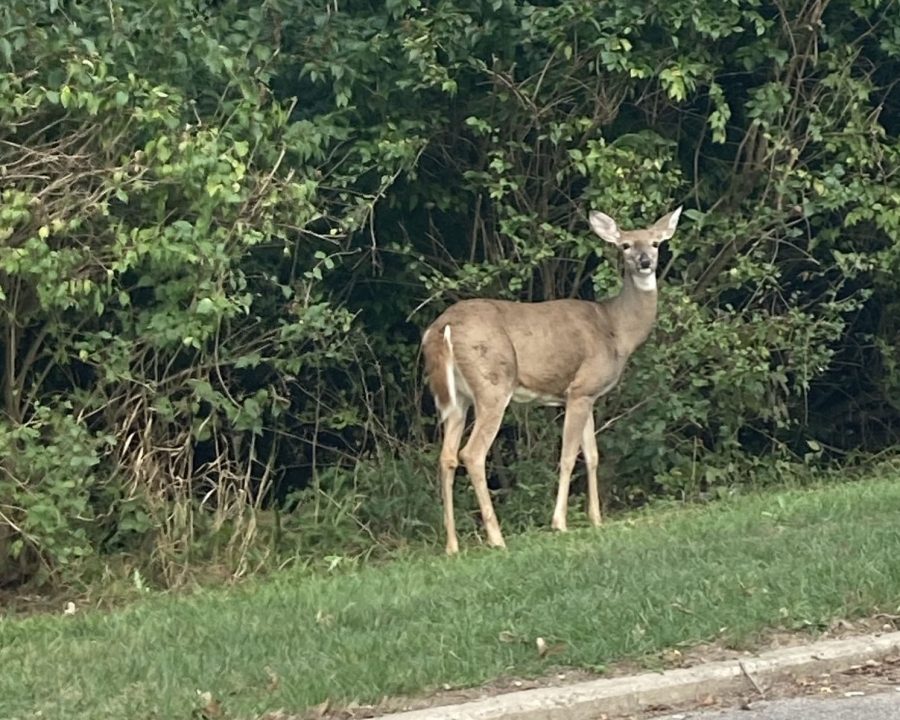 A lack of predators and plenty of vegetation to eat allows the local deer population to expand into more urban areas of Oxford. This deer was spotted this week on the edge of a parking lot near Flower Hall on Miami’s North Quad.

Oxford’s program to control the white-tailed deer population within the city is helping to stock a local charitable meal center with venison.

The first animal harvested by each hunter in the program must be donated to the Community Meal Center in Hamilton, after which hunters can choose to donate or keep their other two deer. Treleaven said 133 deer have been donated to the center since 2009. If they donate their second deer to the center, hunters are permitted to hunt an antlered deer for their third kill, he said.

“So, they would donate the deer and then the Community Meal Center would reach out to the processors,” Marsh said.

CMC serves about 450 free meals to the poor and homeless on Fridays and the last Mondays of the month at two Hamilton locations: Zion Lutheran Church, 212 S. Front St. and Power Source Ministries, 412 S. Front St., according to its website. Using funding from donors and grants, CMC was able to get the deer processed and used for meals. The ODNR started helping with the funding a few years later and required a processing inspection to ensure the quality and safety of the meat, Marsh said.

When the City of Oxford found out CMC was accepting game donations and had the means to have them safely processed, it realized the city’s deer management program could contribute to CMC’s donations.

Oxford’s program began in 2009 with a resolution allowing the city manager to establish a system where citizens can apply fo hunting permits on pre-selected land within the city. The program aims to control the deer populations, Treleaven said.

“When (deer) overpopulation happens everybody suffers,” Treleaven said. “The program is for both the health of the herd and the rest of the ecosystem.”

This year, Oxford has 22 participants and seven approved hunting areas. Five of the hunting areas are on land owned by the city and two are privately owned properties — the Oxford Cemetery Association and the Oxford Country Club, Treleaven said.

Everybody involved in the program must pass safety courses by the Ohio Department of Natural Resources (ODNR) as well as an accuracy test for shooting the bow. The Oxford police department also runs a background check on participants before approval. Hunters must apply to participate through the city manager’s office before the program begins. Other safety measures include bright orange signs warning people of active hunting posted on the hunting areas, according to Treleaven.

The city’s program follows all of the rules and regulations set by the ODNR, including bag limits, dates and means of hunting. Participants can use anything approved by the ODNR for archery season including longbows and crossbows within the weight draw requirements.

Oxford’s landscape is responsible for the population of deer to flourish within the city, said Treleaven.

“First, there’s a lack of predation within the city limits,” he said. “Oxford is also abundant with people who like to garden and plant things, giving the deer a nutritious food source. Finally, the number of wooded areas in the city allow them to hunker down and shelter right here within the city.”

High deer populations lead to increased automobile accidents, a strain on vegetation needed by other animals in the area and increased spreading of disease among the herds.

“When they overgraze within an ecosystem, they tend to wipe out the vegetation within the understory,” Treleaven said. “That vegetation offers food and shelter for other animals and the deer are affecting smaller mammals and insects in the environment.”

“The high quality of Ohio’s deer range and virtual absence of natural predators, coupled with the whitetail’s remarkable reproductive potential, dictate harvest management as the most practical means of maintaining deer populations near county goals,” the publication reads.

CMC depends on the deer management programs, said Marsh. Other cities and organizations, including the City of Hamilton, have programs that contribute, donating approximately 2,000 pounds of deer meat per season, she said.

“It’s been totally beneficial,” Marsh said. “It’s our primary source of meat. We use it for everything and it really keeps our costs down.”