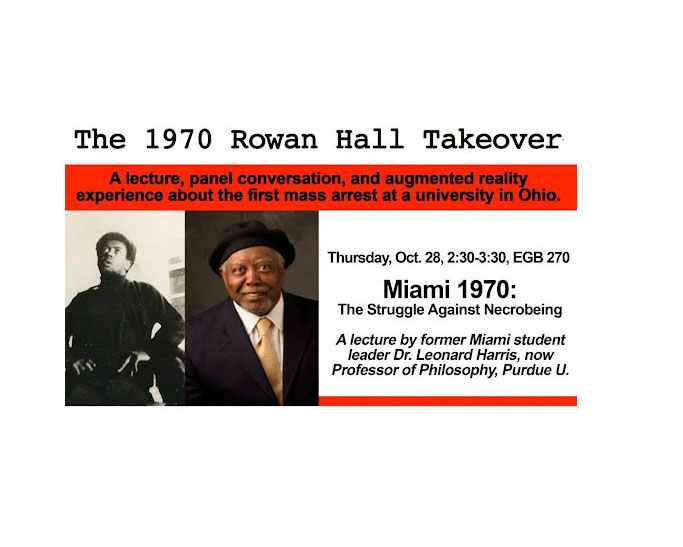 The April 15, 1970 student occupation of Miami University’s Rowan Hall, and the ensuing arrests and violence, are the focus of a three-part program Thursday, Oct. 28 at Miami. The takeover, by students protesting the Vietnam War, happened just weeks before the shooting of protesters at Kent State University, which sparked more protests and the shutdown of colleges and university campuses across the country.

Leonard Harris, once a Miami student leader and founding member of the Black Student Action Association in the late 1960s, leads off the program with a lecture “Miami 1970: The Struggle Against Necrobeing,” 2:30 p.m. to 3:30 p.m. Thursday, Oct. 28, in room 270 of the Miami Engineering Building.

Harris, now a philosophy professor at Purdue University, will then participate in a 5 p.m. to 6 p.m. panel discussion on the 1970 student takeover of Rowan Hall. The panel discussion will be held in Armstrong Student Center 1066.

Rowan Hall was the Naval ROTC building on Miami’s campus at the time. Many more students joined the protest after the building was occupied. Most left when the university threatened them with disciplinary action, but police arrested 176 of the protesters. Later that evening the demonstration turned violent and a campus-wide student strike ensued.

The final event of the Oct. 28 program will be a demonstration of an augmented reality app documentary: “The Curious Ways that Activism Shapes People’s Lives,” 6:15 p.m. to 7 p.m. in the Armstrong Center’s Shade Family Reading Room, which is on the site of Rowan Hall.

All three events are free and open to the public.