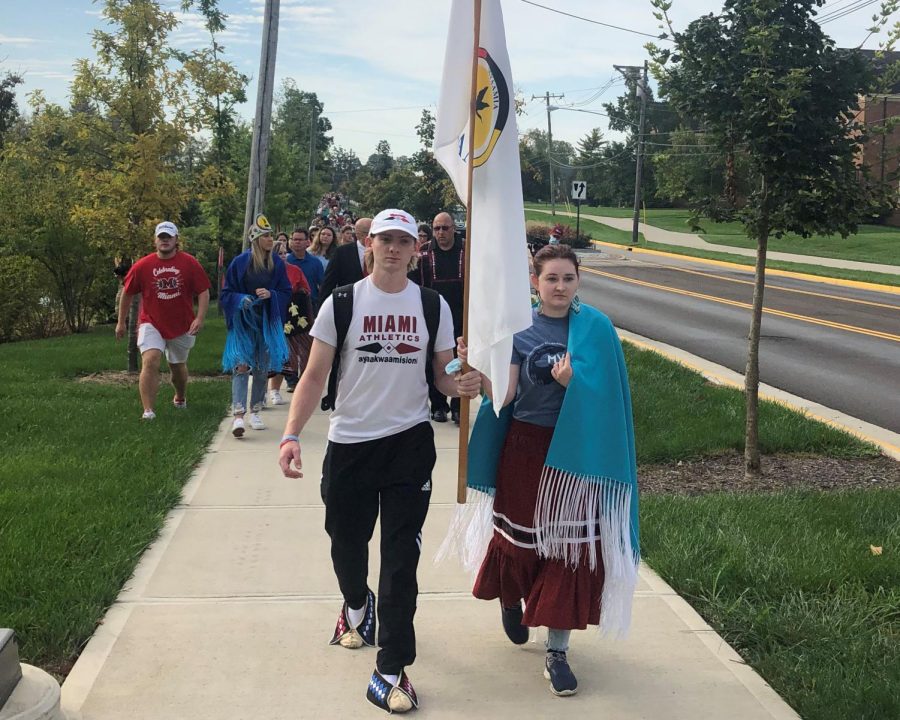 On Monday, Oct. 11, Miami University hosted “A Day of Reflection,” to commemorate the 175th anniversary of the Miami Tribe of Oklahoma’s forced removal from Indiana.

The event, attended by more than 300 people, included speeches from Chief Douglas Lankford of the Miami Tribe of Oklahoma; Daryl Baldwin, executive director of the Myaamia Center on Miami’s campus; and Miami University President Gregory Crawford.

“I extend the sincerest gratitude of our people for this memorial gathering,” Chief Lankford said. “Please know that this event touches our hearts in ways I cannot speak of without being overcome by emotion.”

The Miami University land acknowledgment, read by student body president, Madelyn Jett at the event, recognizes Miami University as being within the traditional homelands of the Myaamia and Shawnee Tribes.

The university shares a name with the Myaamia or Miami Tribe of Oklahoma, whose original homelands ran from the Great Lakes region of lower Wisconsin and Michigan, through Indiana, Illinois and Ohio, including the Butler County area, according to the Miami Tribe’s official website.

In 1795, the Treaty of Greenville was signed between the Miami Tribe and the U.S government, ceding most of their land in Ohio to the U.S. The Tribe’s remaining land in Indiana was ceded to the U.S government by the Treaty of 1840, causing their forced removal to present-day Oklahoma, according to Diane Hunter, the Historical Preservation Officer for the Miami Tribe.

Around 325 members of the Miami Tribe were loaded onto canal boats sent to Cincinnati, and down the Ohio River. Eventually they were forced to settle in Oklahoma. Seven people died on this journey, including six children and one elder, Hunter said.

After the reading of the land acknowledgment, Lankford delivered an emotional speech about the forced removal and how the Myaamia community has healed from that period of darkness.

“Removal negatively affected every aspect of our identity; our sovereignty, our culture, our land, our language and community traditions,” Lankford said. “But together we have emerged from that darkness, surviving to this new day of restored knowledge, vitality, governmental strength and self-determination.”

When Lankford’s speech ended, the audience was invited to participate in a walk of reflection from the Miami University Art Museum, on Patterson Avenue, to the Office of the Myaamia Center, 351 E. Spring St.

During the walk, members of the tribe, including students attending Miami University via the Heritage Award Program, wore shawls, skirts, and other forms of Myaamia dress.

Once they arrived at the Myaamia Center, Daryl Baldwin gave a speech about the generational trauma the tribe has suffered as a result of removal and how the community is overcoming that trauma.

“They knew their relocation would set in motion significant changes in the coming years,” Baldwin said. “But they probably couldn’t comprehend at that time, the level of loss and disconnect the next few generations would experience.”

This disconnect, according to Baldwin, was caused by intense cultural shame instilled through institutions like Indian boarding schools and an increase in social pressure to hide one’s native identity.

“My generation saw elders who were taught to hide and be ashamed of being Myaamia,” Baldwin said. “An elder man told me many years ago that when he was a boy he asked his grandfather to teach him the Myaamia language and his grandfather replied ‘Life will be too hard for you if you learn.’”

Baldwin went on to explain that while the Miami Tribe must remember trauma to remain close to their ancestors and understand their history, they must not live in it, in order to rebuild the community.

“We survived and we are still here,” Baldwin said. “What’s important to me at this time is what happens within the walls of the Myaamia Center.”

She describes generational trauma, coined by social worker and mental health expert Maria Yellow Horse Brave Heart, as the “cumulative and emotional and psychological wounding over the lifespan and across generations emanating from massive group trauma.”

“This means a massive group trauma is inflicted, typically on an ethnic group, which then causes a ripple effect of traumatic symptoms being passed down over generations,” Shea said.

Despite being affected by generational trauma, Shea describes the current Miami Tribe community as resilient. With the disconnection of Myaamia identities and fragmentation of the community, the Miami Tribe was forced to build coping strategies.

“One of the positive outcomes of trauma is post-traumatic growth,” Shea said. “It’s when trauma actually forces us to develop skills that are beneficial to our lives.”

One of the outcomes of post-traumatic growth for the Miami Tribe is the cultural and language revitalization efforts taking place at the Myaamia Center and throughout the community.

“We’ve done a lot of work around identity formation,” Shea said. “Specifically, through language and cultural revitalization, we’re giving people the knowledge, tools and values to understand their current Myaamia experience and identity.”

Crawford concluded the remembrance event with a speech of support from the university.

“Sharing a common name, place and interconnected history, Miami University exists today because of the Myaamia people and the history of removal,” Crawford said.