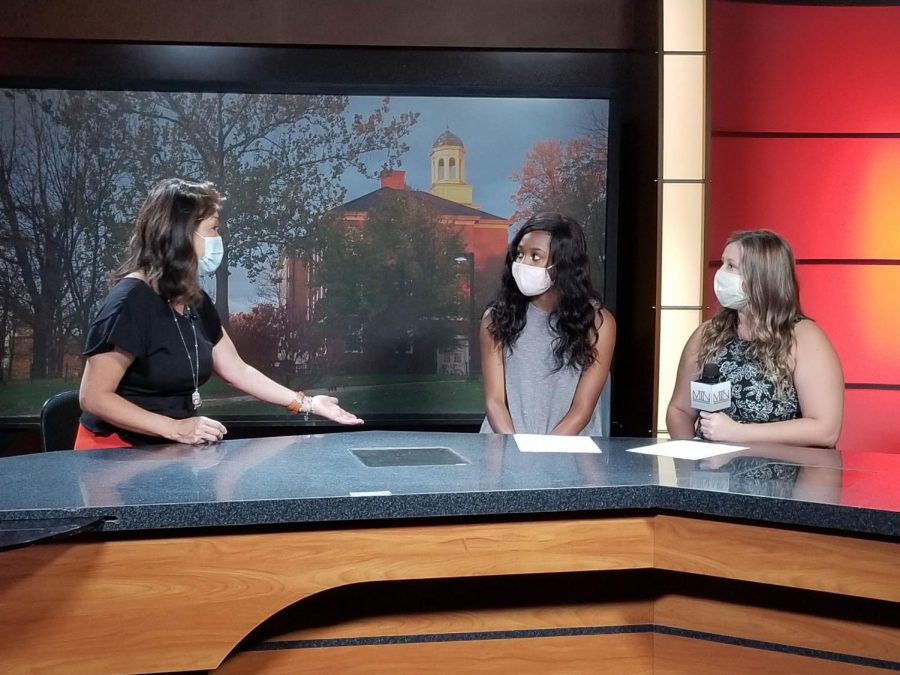 Journalist Juju Chang speaks with anchors Nia Hinson and Jenna Landgraf of Miami Television News on her visit to Miami where she spoke as part of the Lecture Series.

Myths that all Asian Americans are smarter and wealthier than other people lead to harmful stereotypes and blind society to the problems of individuals, said Emmy Award-winning journalist Hyun Ju “Juju” Chang, in her speech Monday to an audience in Miami University’s Hall Auditorium.

Chang’s lecture on anti-Asian racism in America was part of the Miami University Lecture Series and was the first in-person guest lecture since the outbreak of the COVID-19 pandemic. Chang is best known for her roles as co-anchor of ABC’s “Nightline” and contributor to ABC’s “Good Morning America” and “20/20.”

In the past two years, she was recognized for her coverage on the rise of hate crimes against the Asian American and Pacific Islander (AAPI) community. Her experiences caused her to pursue stories on migrants, immigrants and people of color. She wants to continue to “give voice to the voiceless”, as she said this has been her guiding principle throughout her career.

Chang is the child of two Korean immigrants. As a child, she saw that people treated her parents differently, although she couldn’t put it into words. As she grew older, she realized that the “condescending” and “emasculating” microaggressions came from racist beliefs.

“These are all adult words that I couldn’t quite synthesize when I was 8, but I felt it,” said Chang.

Chang cited three concepts that she considers to be large aspects of the Asian American experience and the source of anti-Asian sentiments: the perpetual foreigner myth, the model minority myth and other harmful stereotypes.

“Throughout my entire life, people would ask me a very innocent question, ‘Where are you from?’” said Chang. After saying that she was from California, they would rephrase their question.

“No, where are you really from?”

Chang said the implication of this is that Asian Americans aren’t assumed to be American because of the way they look.

At the beginning of the COVID-19 pandemic, former President Donald Trump and other U.S. officials often used offensive terms to refer to the virus. Some examples are “Kung Flu,” “the China virus” and “the Wuhan virus.”

The consequences of these remarks were the targeting of Asian Americans across the country regardless of their ethnicity. According to Chang, between March and June 2020, the height of the pandemic, there were 2,100 anti-Asian hate incidents reported. This included physical attacks, verbal assaults, workplace discrimination and online harassment. Chang even recounted a time where she was called a racial slur by a driver in a fit of road rage.

The second concept that Chang discussed was the model minority myth. This idea has several layers, including the assumption that Asian Americans face less racism than other minorities. This is false, she said, citing the hate crimes that resulted from the COVID-19 pandemic as evidence of this.

A separate assumption is that Asian Americans are a monolithic group. The U.S Census Bureau considers anyone who can trace their heritage to the continent of Asia to be a part of the AAPI category. This is harmful because it lumps the diasporas of different peoples into a single entity and causes the needs of groups within that category to fall under the radar.

Another idea is that Asian Americans are high earning, well-educated and immigrate to the U.S. through proper channels. Chang said that in parts of New York City and New Jersey, large pockets of recent immigrants exist who are undocumented and uneducated living in “generational, grinding poverty.” The myth of the model minority renders them invisible.

Asian Americans have the highest poverty rates in New York City, higher than any other ethnic group, she said. Asian Americans are 17.9% of the city’s population with the highest rates of poverty, but only received the benefits from 1.5% of social service contract spending and programming, according to a 2018 study by the Urban Institute. The needs of these people are overlooked because of insufficient program outreach because of the assumption that they do not need the help. Additionally, there are a lack of services geared toward cultural understanding and language barriers.

These myths work together to form a stereotype of Asian Americans that attempts to dictate their very existence and pit them against other minorities.

“Any kind of stereotype is dehumanizing because you aren’t seeing me as an individual, you’re seeing as an archetype,” said Chang.

This is exactly what happened at the Atlanta Spa Shootings in March, she said. Robert Aaron Long was charged with eight counts of murder and one count of aggravated assault after he went to three spas in the Atlanta area. Six of the eight victims killed were Asian women. Initially, police said that the attack was about sex, not race. Chang said that both are true.

For many Asian women, racism and sexism are a package deal. A harmful stereotype exists surrounding Asian women that depict them as sexually submissive, hypersexual and meek. These stereotypes stem from American military presence in Asia during the Korean War, the Vietnam War, and post-World War II Japan. In these countries, the sex industry and sex trades centered around American troops as the primary clientele. This perception of Asian women persists, she said.

Chang co-anchored the ABC News Live special “Stop the Hate: The Rise in Violence Against Asian Americans” and reported from the scene of the Atlanta Spa Shootings in 2020. Although the AAPI community consists of people from more than 50 ethnic groups and 40 countries, Chang cites the shootings as an event that unified Asian Americans despite the vast differences between them. Chang said she felt as though her 30 years in the field of journalism has culminated to that moment.

“My career has been an exercise in radical empathy,”  she said.

She encourages positive dialogue, approaching difficult conversations with compassion, treating every person with dignity and drowning hate speech with good speech as the initial steps to combating racial inequality.