Miami commemorates removal of the Myaamia with remembrance event Oct. 11 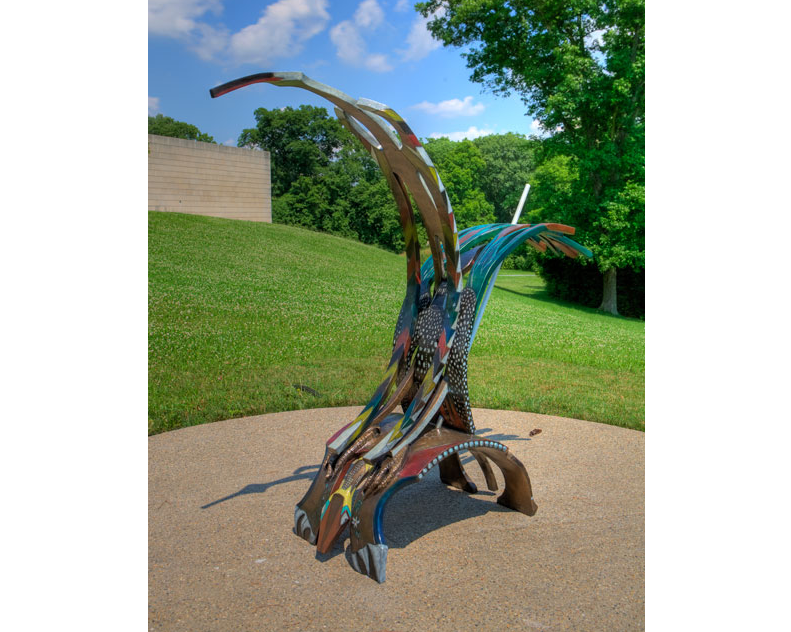 This sculpture, “A Tribe Named Miami, A Surveyors Stake, a Town Named Oxford,” by Myaamia artist Eugene Brown, is in the sculpture garden of the Miami University Art Museum.

One hundred seventy-five years ago next week, members of the Myaamia nation were forcibly removed from their homelands and sent to live west of the Mississippi in current-day Kansas.

Those homelands stretched from what is now Michigan, Wisconsin and Illinois down to the Wabash River Valley of Indiana and into southern Ohio.

Whether they know it or not, people now living in Oxford and southwest Ohio are within the homelands of the Myaamia and therefore tied to the tribe’s history, said Kara Strass, director of the Miami Tribe Relations Office of the Myaamia Center on Miami’s campus.

Miami Tribe members use the term Myaamia to describe themselves in the Miami language, according to the tribe’s community blog site. The people forcibly moved to Kansas later were forced to relocate again, this time to Oklahoma. Today, the tribe is known as the Miami Tribe of Oklahoma.

In 1794, the Miami Tribe was defeated by General Anthony Wayne at the Battle of Fallen Timbers, forcing the Miami and others to leave Ohio. In 1818, Native Americans were forced to give up their last reservation in Ohio, according to Ohio History Central.

Miami University’s name reflects the history of the Native American tribe, the Miami Tribe of Oklahoma, that once lived in the Miami Valley region of the state, according to the university’s “About” page. Miami, Florida is named after a different Native American tribe, the Mayaimi, who once inhabited the Lake Okeechobee area, according to WLRN.org.

Ten years after Andrew Jackson signed the Indian Removal Act of 1830, the Miami Tribe was ordered to move by the subsequent Treaty of 1840.

As tribes were slowly removed from the region, the Miami Tribe remained one of the last Native American communities, and pressure increased from white settlers to remove them. Under the 1840 treaty, individuals and families who received allotments of land could stay in the state, allowing more than 100 Miami people to avoid the removal, according to the community blog.

Descendants of the people who remained were referred to as the Miami Nation of Indiana after the removal of the others.

“After many attempts to avoid this devastating move . . . our ancestors, numbering approximately 500 souls, were herded at gunpoint and forced onto canal boats to begin the long journey,” according to the blog.

The canal boats left Indiana Oct. 6, 1846 and passed through Butler County on the Miami Erie Canal along the Great Miami River, according to the Miami Tribe. They arrived in Cincinnati Oct. 11, where they were loaded onto boats headed west for Kansas.

“330 people were forcibly removed, and seven died on the journey,” said Strass.

Today, the Miami Tribe of Oklahoma is a federally recognized tribe with more than 5,000 citizens living throughout the United States. In Oklahoma, the tribe runs businesses, a newspaper and a police department for its sovereign land.

The Miami Nation of Indiana is not federally-recognized but still has a flourishing cultural community of more than 6,000 members in the Fort Wayne area.

Aside from being within the homelands of the tribe, Strass explained that because Miami University was founded in 1809, classes were likely in session as the Miami Tribe community passed through Butler County on the Miami-Erie Canal.

The university will commemorate this anniversary with “A Day of Reflection,” Monday, Oct. 11.

Starting at the University Art Museum, Doug Lankford, chief of the Miami Tribe of Oklahoma will speak about the history and impact of the removal. This 10 a.m. speech will take place outside by the sculpture titled “A Tribe Named Miami, A Surveyors Stake, a Town Named Oxford,” according to university communications.

The sculpture, created by Myaamia artist Eugene Brown, represents the land being surveyed, ceded to the United States and used to found Oxford in its place, Strass said.

“It’s a visual representation of how interconnected the tribe and university really are,” Strass said.

After Chief Lankford’s speech, attendees will walk together to Bonham House, the Office of the Myaamia Center on Miami’s campus.

Along the way, attendees will tie pieces of fabric to trees to remember those who were on the journey.

Upon arrival at the Myaamia Center, the staff will conclude the event with information about the revitalization and healing efforts of the community today.

This event is free and open to the public.

Keep an eye on the Oct. 15 edition of the Oxford Observer to read coverage from the event and learn more about the relationship between the Miami Tribe and the university and the history and community of the Miami Tribe of Oklahoma.

In the meantime, check out these resources to learn more: